The study, led by Agriculture and Agri-Food Canada (AAFC) researcher Frank Larney, was initiated in 2000 after meetings with various key players in Alberta, including the Alberta Pulse Growers, the Potato Growers of Alberta and Rogers Sugar/Lantic Inc., along with growers from around the province.

“We had buy-in from growers very early on. We used those meetings to plan the experiment and come up with the crops we wanted to include, [as well as the] sequence we wanted to grow them in,” says Larney.

Six rotations were used in the study (see Table 1, below) with each of the 26 phases appearing each year, and replicated four times in total.

Larney explains that CONS practices were chosen with direct input from growers and were thus highly practical in nature. For example, the compost practice was chosen because, he says, “a lot of irrigated land is closely associated with the feedlot industry in southern Alberta, so the use of composted manure to replace some of the chemical fertilizer inputs seemed obvious.”

Additionally, Larney and his team chose to use narrow-row solid-seeding management for beans, because when the study began, only a single Alberta grower was using the technique. Estimates revealed at the Irrigated Crop Production Update meeting in Lethbridge in late January show that in 2013, 15 per cent of bean growers were solid-seeding in narrow rows. “It’s a management practice that’s set up to protect soil quality and reduce the risk of erosion,” says Larney.

The researchers chose to include rye as a fall-seeded cover crop because there was interest from growers.

Yields increase using CONS
The study’s results show that growing potatoes in rotation (potatoes-beans-wheat) without the use of CONS practices is not recommended due to declines in yield of between 12 and 18 per cent over the long term. Overall, CONS practices increased potato yield by seven per cent, with this number increasing for rotations longer than four years. CONS practices also improved soil quality parameters such as organic carbon, microbial biomass and soil aggregate stability.

Larney says that once the rotation plots had been established, many researchers used the study to investigate a variety of research concerns. Populations of weeds, insects and nematodes, respectively, were measured over time, and soil microbiologists examined microbiological indicators of soil quality. “I also did some measurements on various soil quality indicators, like soil organic matter, and looked at effects of rotations on nitrogen and phosphorus in the soil profile,” says Larney.

Key among the findings was the positive impact of CONS practices on soil health. “The soil microbiology indicators were quite consistent,” says Larney. “All but one of 10 indicators showed positive effects of CONS on biological indicators of soil health.”

In the four-year rotation comparison, there was a 23 per cent increase in soil organic carbon in the top 30 centimetres of soil after 12 years. “The main driver of those increases was the compost application, because that’s how we were putting carbon back into the soil,” says Larney.

Overall, the study highlights the importance of maintaining good management practices in order to protect soil health in the long-term – a lesson that is already well understood by Prairie growers, according to Larney. “Soil organic matter content can decline, and if there’s no effort made to replenish that by adding manure or compost or reducing tillage or growing cover crops, you can run into problems with reduced soil organic matter, which, in turn, leads to problems with soil erosion, or general soil degradation.”

Growers face frequent temptation to tighten up rotations, but if organic matter is not returned to the soil, soil quality will decline, and this will ultimately impact yields. “Farmers should be aware of their soil organic matter levels,” says Larney. “They can test soil organic matter or carbon, and if these levels look like they’re low, growers can look at using compost as a way of increasing them.

“You have to balance the economic returns with the environmental effects that you want. You want to keep your soil in good condition and productive.” 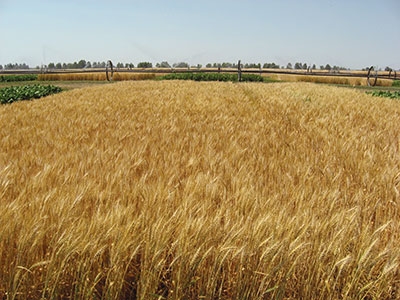