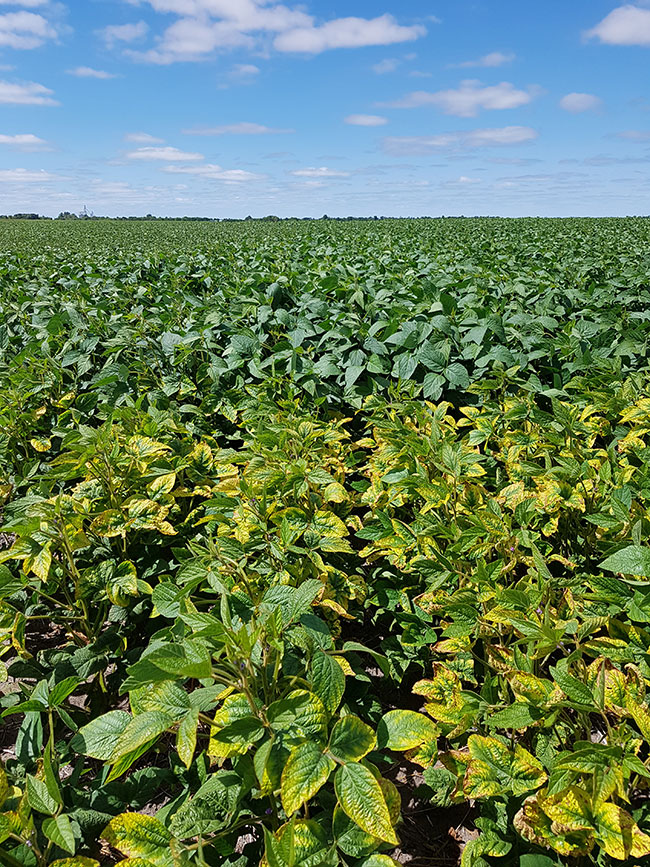 Sometimes research creates more questions than answers, and that was certainly the case for Megan Bourns’ research on soybean response to potassium (K) fertilizer. In on-farm and small plot trials on soils testing low in K, a lack of yield response to K fertilizer was puzzling.

“The results led us to question whether it was soybean-related or soil-related. Was soybean better at scavenging potassium than we thought, or was the soil releasing more potassium than was estimated?” says Bourns, who conducted the research as part of her master’s thesis in the University of Manitoba’s soil science department.

The research was initiated because of soybean’s high K removal rates of 1.1 to 1.4 pounds (lb.) potassium oxide (K2O) perbushel of yield. While K fertility hasn’t typically been an issue in most of Manitoba’s soils, Bourns and her supervisor, Don Flaten, a University of Manitoba professor, wanted to get a better understanding of K fertility given the recent increase in K deficiency symptoms in soybeans and the growing soybean acreage in Manitoba.

The research had several components. On-farm field trials were established with the Manitoba Pulse and Soybean Growers On-Farm Network. Over two field seasons in 2017 and 2018, 20 site years were established. Each site was a replicated strip trial with one treatment of either 60 lb. K2O per acre (K2O/ac) banded away from the seed, or 120 lb. K2O/ac broadcast and incorporated, along with an unfertilized-K control.

Soil test K levels using the standard ammonium acetate extraction method ranged from 52 to 450 parts per million (ppm). Current Manitoba K fertility recommendations indicate that above 100 ppm, no additional K is required for soybean. At 50 to 75 ppm soil test levels, 30 lb. K2O/ac is recommended as a broadcast and incorporated application. Below 25 ppm recommendations are for 60 lb. K2O/ac.

The other puzzling result was that there wasn’t an agronomic or statistically significant relationship between ammonium acetate K soil test levels and yield.

Small plot trials produced similar results
Small plot trials were also conducted in 2017 and 2018, with a total of seven site years. At these sites, soil test K levels ranged from 49 to 117 ppm. Six combinations of K fertilizer rate and placement were compared: 30 or 60 lb. K2O/ac side-banded and 30, 60 or 120 lb. K2O/ac broadcast and incorporated, as well as a control site with no added K.

Bourns saw K-deficiency symptoms in both years at some locations at V2-V3 stage, as well as at seed fill and persisting, in some cases, to leaf drop.

“This indicated that the sites were low in potassium, but we still didn’t see a significant yield response to potassium fertilizer,” Bourns says. “The lack of yield response was surprising, especially given the low background soil test K levels at these sites and the presence of deficiency symptoms.”

Again, there was no agronomic or statistical relationship between background ammonium acetate soil test K and relative yield regardless of placement and rate, or on a moist or dry soil test extraction basis.

Anticipating that the amount of K in the soil and the response to K fertilizer would vary within the on-farm field trial sites, Bourns established eight pairs of micro-plots within the on-farm field trials in 2017 and in 2018. These micro-plots provided her with more data points to try to understand the relationship between soil test K levels, application rates and yield.

“We saw some responses on the micro-plots with increases in tissue K concentration at the R2-R3 stage, but again, we didn’t see a significant relationship between soil test K levels and yield,” Bourns says. 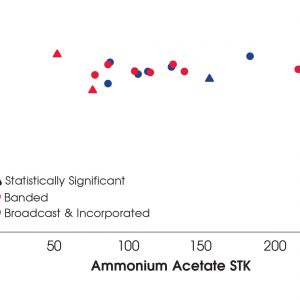 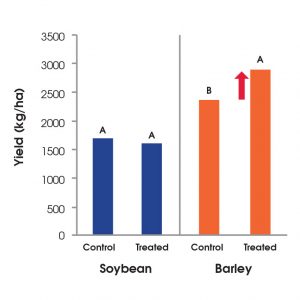 Soybean and barley response to K fertilizer at three sites in 2018. Chart courtesy of Megan Bourns.

Barley responded where soybean didn’t
Bourns added a barley and soybean response trial adjacent to the small plot trials in 2018 to see if barley would respond to K fertilizer when soybean didn’t. In those trials, K fertilizer produced a 20 per cent yield increase in barley, but none in soybean. Bourns cautions that the barley trials were only at three sites and for one year, but it shows that something different is going on with soybeans’ response to soil test and fertilizer K.

In looking back at the research, Bourns says several factors could have impacted the lack of yield responses to K. Both the 2017 and 2018 growing seasons were very dry, and the impact was noticeable on the sandy soils where the small plots were established. She says that if moisture hadn’t been so limiting, a seed yield response to K fertilizer may have been observed.

Potassium variability across the small plots also presented challenges. The differences in soil test K from one plot to another within the same site were much greater than anticipated and could have masked the ability to measure a yield response to K fertilizer.

The final challenge, and surprise, was that the ammonium acetate test threshold of 100 ppm did not accurately predict soybean response to K fertilizer.

“The world of potassium isn’t simple. Soybean fertilization is a challenge to work with. The same lack of response in soybeans has been seen with phosphorus fertility,” Bourns explains.

Where to go from here?
Flaten had hoped that the research would help inform soil scientists on how to update K recommendations for soybeans in Manitoba.

“It can be frustrating to work with a crop like soybean that doesn’t respond to fertilizer and soil tests in the ways that we’re used to. However, the barley test that Megan ran in 2018 was very valuable, because it identified that our conventional soil test could predict potassium response with barley and not soybean, so we know something different is going on with soybean,” Flaten says. “I can’t recall seeing any other study that reported on potassium response in soybean compared to other crops, although other studies have shown somewhat similar results for K responses in canola being much less than in barley.”

For now, Flaten says farmers and agronomists should rely on current K fertilizer recommendations, but advises to monitor K soil test levels to ensure that they do not draw soil fertility down too low.

“There’s no compelling reason for farmers to add potassium if soil test levels are above 100 ppm for soybeans, but soybeans are such a pig for uptake and removal of potassium that we need to watch fertility levels over the longer term,” Flaten says. “The results show that we’re not quite ready to provide new potassium recommendations in soybeans.”