October 9, 2020
By Agriculture and Agri-Food Canada 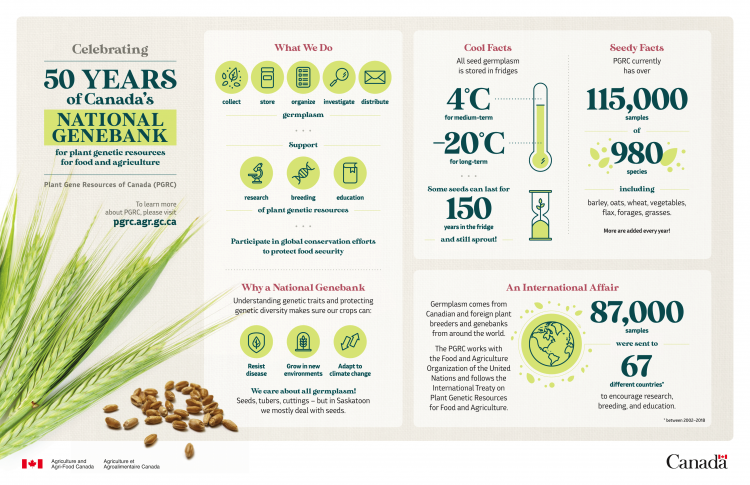 Canada’s national genebank for plant genetic resources is celebrating its 50th anniversary! Officially known as Plant Gene Resources of Canada (PGRC), it was established in 1970 and has contributed to national and global food security ever since.

The 50th year of PGRC has come at a unique time for our world, as the outbreak of COVID-19 reminds us that pandemics can happen at any time – to humans, crops or animals. As we have seen with COVID-19, the globalization of supply chains for agricultural and horticultural crops can inadvertently reduce the genetic diversity of crops, making them susceptible to disease and wide-spread crop failures.

PGRC’s important work preserves the genetic diversity of cultivated plants and their wild relatives to support plant breeding and conduct research and education.

“Having the genetic traits for disease resistance available is one of the major contributions of genebanks around the world, including PGRC,” says Axel Diederichsen, PGRC curator. “In addition, the need to rely more on locally adapted crops in the future may be supported by genetic diversity in the genebank collections.”

PGRC, originally located in Ottawa, moved to Saskatoon in 1998. It is part of the Canadian national plant genebank system for plant genetic resources for food and agriculture, which also includes the Canadian Clonal Genebank in Harrow, Ont., which focuses on fruit crops, and the Canadian Potato Gene Resources in Fredericton, N.B.

The seed bank at PGRC maintains a collection of more than 115,000 different samples (or accessions) of cultivated plant species and their wild relatives. This collection includes samples from countries across the globe, but the PGRC is more than just a place that acquires and preserves samples. PGRC rejuvenates and assesses seed germplasm and undertakes collaborative research on how best to store, germinate and cultivate seeds to learn more about their genetics and traits.

PGRC collaborates with many international partners, including the United States, Mexico and other countries involved in the Food and Agriculture Organization (FAO) of the United Nations. PGRC is Canada’s representative in a worldwide network of plant genetic resources centres coordinated by the FAO and is our key player in the North American PROCINORTE Task Force as well as the International Treaty for Plant Genetic Resources for Food and Agriculture.

The PGRC distributes more than 5,000 germplasm samples each year, including seeds, tubers, and cuttings, nationally and internationally to over 60 countries. These samples are used to support research, breeding, education and the diversification of agriculture here in Canada and around the world.

The work being done at PGRC plays a fundamental role in ensuring the resilience of Canada’s agricultural sector and contributes to our world’s food security and supply.