Researchers studying the strip-tillage option in Manitoba and North Dakota say the jury is still out on whether it’s a good choice – but the writing is on the wall. Strip tillage has become a popular option for corn and soybean crops in traditional U.S. Midwestern growing areas. The implement primarily opens black, ready-to-seed strips in fields that are covered with heavy residue. Soil in the strips warms more quickly; the field remains protected by the residue from erosion and moisture loss.

Strip tillage combines the benefits of both conventional and zero tillage, according to Greg Endres, North Dakota State University extension agronomist. The NDSU agronomist has had trials with strip tillage since 2005, and may continue a while yet.

Several years ago, Endres described strip till as a two-pass system for row crops. The cleared strips can be six to 12 inches wide. Fertilizer is injected during the tillage operation. Two years later Endres says things have changed.

“It [strip tillage] started about 10 years ago. I sense less excitement about strip till at this time. The new excitement in tillage is vertical tillage,” he says.

“Strip till is for row crops. I’m confident there would be more vertical tillage taking place in North Dakota than strip tillage now, just because you can use it in nearly any situation,” Endres says. “Even no-tillers are using vertical tillage for short-term remediation. With the challenging conditions we had last year, people went to the extreme to try to survive with a productive season.”

Manitoba machinery dealers, in private conversations, were saying the same thing. Last fall, the new vertical-tillage equipment wasn’t on machinery lots; it was in the fields, working. As for strip-tillage implements, salespeople at several southern Manitoba dealerships in January 2012 either didn’t know what it was or didn’t know where to find an implement.

Farmer Kevin Visscher, west of Carman, Manitoba, owns an American-made Yetter eight-row, 36-inch strip-till machine, which he obtained through an Ontario distributor. He made good use of it in 2009 and earlier. Due to wet field conditions, it didn’t leave the yard in 2010 or 2011.

The nearest area using strip tillage regularly is about 60 miles south of Manitoba, around Devils Lake, according to Endres. It’s a corn-and-soybeans area with easily eroded black soil.

“Strip till has helped to improve that aspect of properly managing those soils,” he says. “Most everybody uses it for fertilizer application, particularly for deep banding. The concept works fine there. For some it’s a very nice compromise, an opportunity to switch from conventional till to some level of reduced tillage with row crops.”

The practice should have a fit, in principle, for Manitoba’s increasing number of corn and soybean producers, Endres believes.

Manitoba research
A few agronomists in Manitoba, like Endres, have considered the strip-till concept. Trials have been started at the federal-provincial Crop Diversification Centres in Carberry and Portage la Prairie. Other tillage trials have been conducted at the Brandon Research Centre and at Westman Agricultural Diversification Organization sites in the southwest.

“We thought we should explore this idea because soils are quite prone to erosion in the Carberry area,” says Craig Linde, MAFRI diversification specialist. “Soybean and corn acres are expanding out of the Red River Valley, so we thought we should focus on trials at Portage as well, this year.”

Both sites had issues in 2011 that gave inconclusive results. At Portage, the trials were seeded very late due to wet conditions. “There were big visual differences in the trials at Portage. It could have been because of the delayed seeding,” Linde says. “The conventional tillage trials were the tallest and highest yielding, followed by strip till.”

At Carberry, agronomists did replicated fall strip-tillage treatments as well as spring treatments with corn and soybeans. The plots were direct seeded into stubble and heavy residue on the same day. Frost occurred on Sept. 13, 2011, just as the beans were starting to turn colour and mature.

“We didn’t have any differences between the systems for soybeans, in Carberry. However, the variability was quite high. Conventional tillage generally outyielded the fall strip tillage. Zero till was third, and the spring strip till was the lowest yielding,” Linde says.

Between two early-maturing corn varieties at Carberry, the earlier also had the greatest yield and did best under conventional tillage. Plans for repeating the CDC trials were on hold pending winter meetings.

“I can report two things. Our experience definitely raises a question about differences between fall and spring strip-till treatments. Spring strip till was certainly inferior to the fall strip tillage, on the lighter Carberry soils. And, because we noticed interaction among varieties, it is possible that some varieties are better adapted to strip-till than other varieties,” he says. “Those would be interesting questions to study.”

Final thoughts
At least one strip-till implement was developed by a southern Manitoba short-line maker about five years ago. However, it never went into full production. Plans were cancelled when it became apparent that more than enough models already were being built in the US.

Whether strip tillage will spread north of Devils Lake and into southern Manitoba as a common practice remains to be seen. Well-developed tools are available from several US sources. Anyone using strip tillage also requires an RTK guidance system for precision-placing seed into the strips.

“It’s hard for people to see the value of strip till in a season,” Endres says. “Long term, if they’re going from conventional till to a strip-till system, they will realize value with it.

“If they get into the system, in five years they may see an improvement in their soil productivity. There might be a slight increase in their organic matter. Definitely they’ll have less risk of soil erosion, less trips across the field. That’s where the payback would be. It requires being patient for long-term payback versus getting payback immediately.” 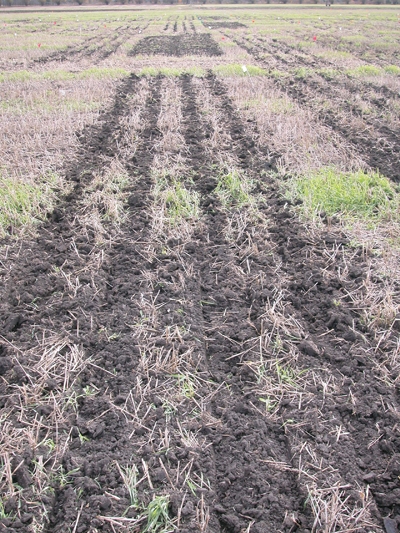 Strip-till research in North Dakota is trying to judge the benefits. Researchers studying the strip-tillage option in Manitoba and North Dakota say the jury is still out on whether it’s a good choice – but the writing is on the wall.
Print this page