Strip cropping is a method of cultivation in which a variety of crops are sown in alternating strips in a single field. It is a type of intercropping that involves planting crops in distinct rows that can be separately managed. 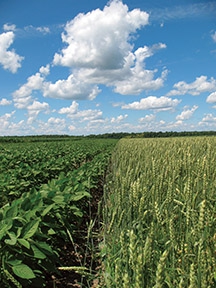 According to Geneviève Labrie, a biologist-entomologist at Quebec’s Centre de recherche sur les grains, it’s a system that can provide multiple “eco-services,” ranging from erosion control to nitrogen supply to weed control. But the benefit she’s focused on is the dramatic effect on soybean aphid populations.

Labrie is the author of a recent study, “Impact of large strip cropping system (24 and 48 rows) on soybean aphid during four years in organic soybean,” published last winter in Agriculture, Ecosystems and Environment.

The publication presents the results of a four-year study, conducted between 2007 and 2010 on a single organic farm near Les Cèdres, Que., in which a strip cropping system of soybean, wheat, corn and vetch (a cover crop) was installed in 18 and 36 metre strips and compared with a control crop of 180 metres of soybean.

“When I finished my PhD some producers called me because they wanted to evaluate strips on their farms,” Labrie says. “We evaluated all of the pests in the soybean, wheat and corn, and also the pests’ natural enemies.”

The experiment confirmed the producers’ assumptions: the system demonstrated a dramatic impact on soybean aphid populations, with a reduction of 33 to 55 per cent compared with the control plots during high infestation years.

Recipe and results
Thomas Dewavrin is a co-owner, along with two brothers, of Les fermes Longprés ltée, the farm where the study was conducted.

He says the family operation went full-scale organic in 1997 and has diversified to include a flour mill and cold-pressed oil processing plant. They’ve been ridge cropping and strip cropping since the late 1990s, but enlisted Labrie’s help to quantify pest population reductions.

“We saw a 50 per cent reduction in aphids with Dr. Labrie,” Dewavrin says.

Using a tool called the “land equivalent ratio (LER),” defined by the United Nations Food and Agriculture Organization as “the ratio of the area under sole cropping to the area under intercropping needed to give equal amounts of yield at the same management level,” Labrie and her team found that the 18 metre strips were between 18 and 69 per cent more efficient compared with sole crop, while 36 metre strips were similar to control plots.

The finding suggests multiple ecological benefits to the system beyond the most obvious: dramatic reductions in soybean aphid populations.

Advantages
Labrie believes the drop is due to a combination of factors, including the increased efficiency of natural predators, the physical barrier of corn stalks, the presence of plants that are not natural hosts to soybean aphids, and the mixed visual cues presented by multiple crops planted together.

“Aphids arrive by wind from the United States, and sometimes from overwintering sites that are really close to the field, and they will choose to land on the field at the beginning of the season,” she says. “They choose by colour and then by olfactory cues.”

Large fields planted solely to soybean will attract more soybean aphids, drawn by the uniform colour and the scent of the plants; strip cropping systems tend to attract fewer aphids to begin with.

The system is not only used by organic producers, Labrie says, but many conventional producers in Quebec use it as well. The drawbacks are few but significant; the biggest is time management.

“What I heard from the conventional or organic producers is that it takes more time,” she says. “You have to be very, very precise with the strip sizes, because if you have spaces between the strips, there will be a lot of weeds.”

“I know that one of the conventional producers used it for 20 years, and last year he was tired and even though there was an increase in yield and reduction in pests he decided it took too much time,” she says. “There is an increase in yield in many fields, and the landscape is more diversified, and there is an impact on pests. So there are many advantages, but the time could be the inconvenient thing.”