Features Agronomy Tillage
Where did the salinity come from?

Manitoba grain farmer and winery owner Grant Rigby wants some answers about salinity. Rigby farms is a fourth-generation 1882 homestead on the rolling Waskada clay-loam soils of southwest Manitoba, near the town of Killarney. With a University of Manitoba degree in agronomy and a master's degree in food science, Rigby hopes to find those answers.

"We produced big yields in the 1980s and 1990s," he says. "Then I started noticing a decline in productivity. White salts started showing up for the first time ever in very small patches near sloughs where the crops had been lush; they had lodged there most years."

Rigby saw compaction where the tractor drove close around sloughs. As well, he began seeing stunted crops in higher rings around sloughs. By 2000, Rigby started making changes to how he did things, and by 2002, he was done with most industry-approved approaches.

"We decided to solve it ourselves. I got rid of heavy equipment and all herbicides. I also quit using ionic chemical fertilizer, to get on board the organic marketing opportunity," he recalls.

While he notes those efforts helped, they didn't answer his question – where did the salinity come from? Today he's still working on that.

Along highways and fields on the Prairies, he says, it is typical to see "several acres per mile" where salinity has moved in. For the worst bare patches, he notes it will be extremely costly, if not impossible, to recover production. No domesticated crop species will thrive in these areas. Almost always, they are low areas with the best and deepest topsoil.

"On my farm, we were starting to get bare patches where no crops grew. There were a few spots where white salts were crystallized on the surface. Those no longer exist on my farm. I did it by letting weeds grow. I let biology thrive there," he says.

Standard practice for countering salinity is to plant deep-rooted perennial forage, usually alfalfa, to extract water from below and suck the salts down with it. "I did plant alfalfa and clover. Where they didn't grow, fortunately the salinity was not so advanced that other wild species couldn't survive. Foxtail barley and kochia invaded the bare spots. They lived where no domesticated species would, and they saved my farm from the bare spots we see on many other farms in the neighbourhood now," Rigby says.

"Quackgrass and dandelion started growing under the foxtail barley and kochia, so I added alfalfa. Now I grow hay in those patches, and I can now plant annual crops there, but I don't try to eradicate all the wild species," he adds. For example, if he suppresses the alfalfa and quackgrass with shallow discing and spiking, he can establish annual fababean or flax. "The perennials recover, but I get some grain to harvest while halting salinity with perennial roots."

Eye opener
The Manitoba branch of the Canadian Society of Soil Science summer tour came to view Rigby's salinity issues in August 2012. It was an eye-opener: the white stuff was calcium sulfate.

"Some wondered if the sulfate originated with the sulfate fertilizer that we had applied," he says.

Rigby hypothesizes that salinity may be a consequence of routine fertilizer application. The fertilizers that farmers typically use are salts that dissociate into ions. "Ammonium sulfate splits into ammonium and sulfate ions. The sulfate anion remains dissolved in the soil water. The ammonium cation displaces native calcium cations off the soil clays. As the soil water drains, the calcium and excess sulfate leach," he says. "Where the calcium sulfate solution puddles and dries, they combine as the dry white calcium sulfate salt that we see."

Ionic fertilizers are a plausible cause of salinity, but that may not be correct in every situation. Rigby notes there are other possibilities:
- Deep perennial roots and mycorrhizae, developed during 10,000 years of grassland, stabilize the soil and hold calcium ions adsorbed on the clays. Now, by killing deep roots or cutting ditches into the parent material below, calcium may be free to move.
- Ancient biology in the subsoil became starved of photosynthetic energy after sod breaking. Now, it may be releasing its biological sulphur as dead leachable sulphate.
- Deep compaction caused by high-speed turning of heavy equipment at headlands and corners suffocates roots of air, and enables salt solutions climbing up via capillarity.
- Prior to cultivation, sulphur was evenly distributed in the deep perennial Prairie soil at its maximum biological concentration limited by the sun's energy. Now, collected in low areas by soil erosion, sulphur might be in surplus relative to annual cropping photosynthesis.
- Toxins may be killing subsoil life. Cadmium from old phosphate fertilizer and from tractor tires concentrates at headlands and may kill soil fungi populations. Systemic chelating pesticides may tie up the micronutrient supply in deep root tips, far below topsoil where bacteria adapted to degrade them. In high-salt patches, pesticide biodegradation may not be occurring.
- Pure snowmelt water in sloughs may pick up calcium sulphate from the field as it climbs up the field by capillarity. Calcium sulphate solutions flowing down from hills may collide with slough water at the salinity ring around sloughs.
- Roads built of expanding clays sponge the pure water from snowmelt and add calcium to it. When compressed under passing vehicles, the salt solution may be pumped down and outwards under fields.

Action needed
"I think it's an emergency," Rigby says of the growing salinity issues. "If a grower sees any spot on the farm where nothing is growing, it needs action. It's going to get bigger. Areas of landscape are being lost for future generations. They're not getting food off of them even now.

"In the dry 1930s, this area never had a massive crop failure. The rolling land always had crops in the fertile moist areas around sloughs, where today there is salinity," he adds.

Typically, the rich arable lowland no longer produces the best crop. The calcium sulphate is too high there for annual grain crops. "That's a very bad sign, especially if we get another decade of drought."

For remedies, Rigby skims off the white calcium sulphate using a grain shovel to avoid further compaction, and then returns it to the knoll. He covers the patch with straw or a loose tillage mulch to stop the evaporation that draws salts to the surface. He also uses lighter machinery, and relies on nitrogen-fixing legumes until stabilized forms of non-ionic nitrogen can be purchased. He maintains sparse old alfalfa within grain crops to sustain deep subsoil life and hold sulphur on uplands.

But first, Rigby says, we really need to understand salinity.

"Salinity is the evidence that we're making a serious agronomy mistake. Farming caused it. We caused it. It wasn't here when my family homesteaded this place. We made the decisions that produced it. We're responsible. I think we're all responsible.

"Grain could cost more to grow, but if my hypotheses are valid, there's really no other option other than to change what we're doing," he emphasizes. 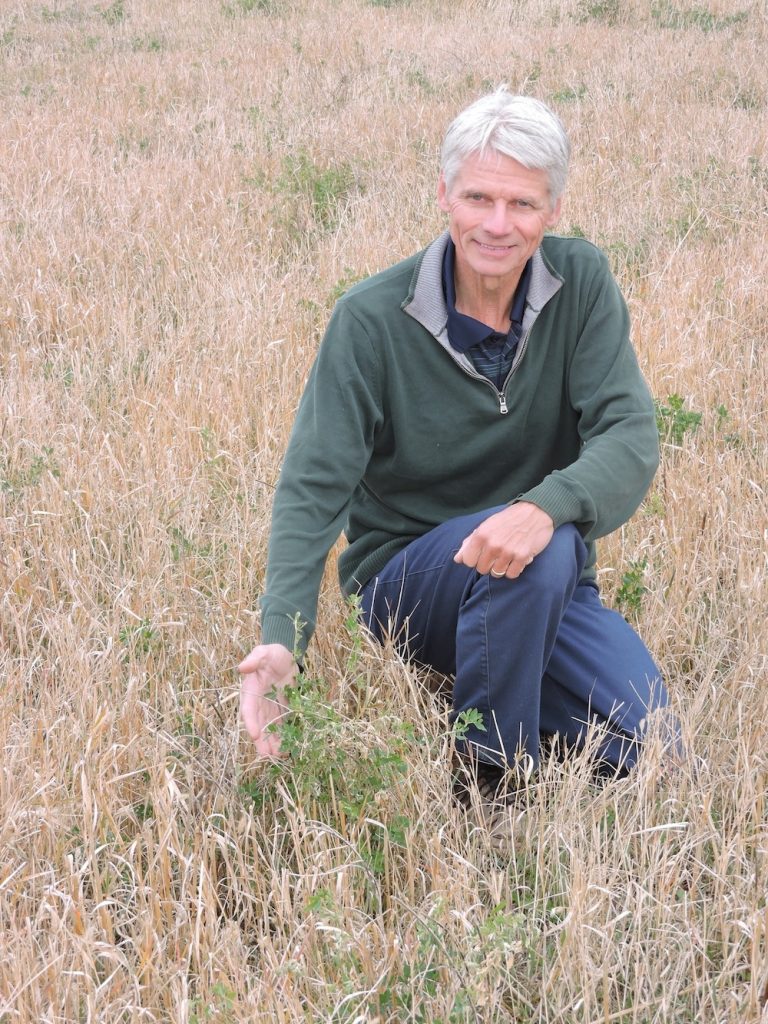