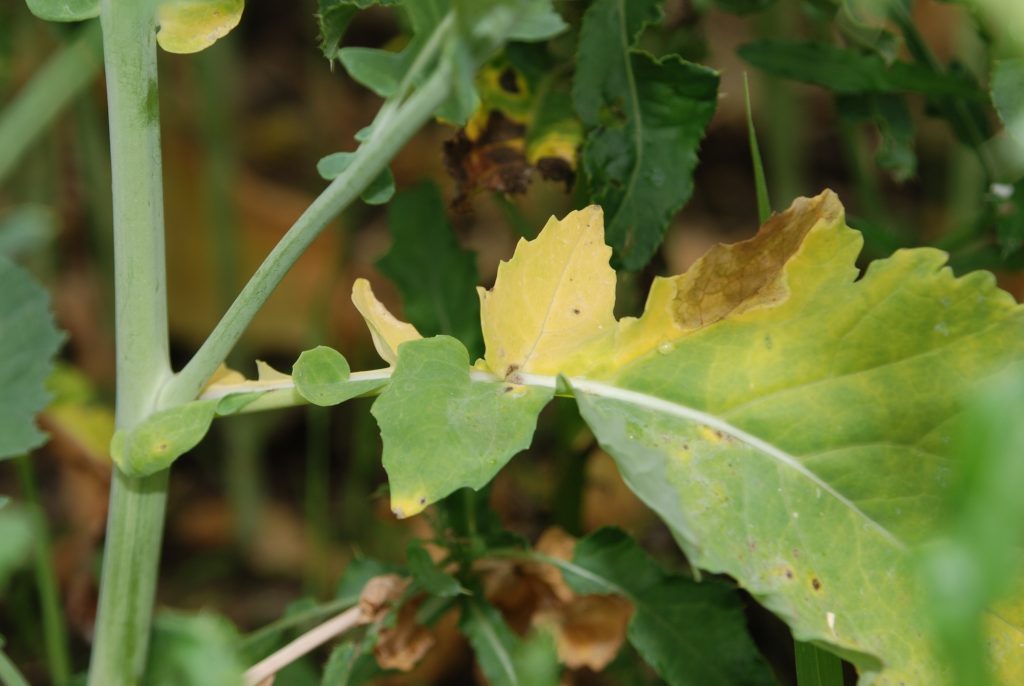 Sclerotinia developing on an infected canola leaf. First appearing in rapeseed and then in canola: sclerotinia stem rot is a challenging disease on these crops.

“Sclerotinia can cause disease in over 400 plant species. In canola it causes stem rot and is one of the top four canola diseases in Western Canada,” Barbara Ziesman, oilseed specialist with Saskatchewan Ministry of Agriculture at Regina, Sask., says.

Yield loss due to sclerotinia stem rot is estimated to be 0.5 per cent for every one per cent increase in the disease incidence. If 12 per cent of the canola is infected by sclerotinia, then a disease loss of six per cent could be expected under optimal conditions.

That message isn’t any different than what Stone was saying 35 years ago. He described the lush growing conditions in 1977 and 1978 as particularly favourable for disease development, and Agriculture Canada Research Branch in Saskatoon, Sask. reported losses as high as 28 per cent. So what have we learned since?

Cultural control
Using cultural control has limited value for canola growers. Ziesman says that while a three- to four-year rotation can help reduce sclerotinia inoculum in the field, ascospores can move several kilometres on the wind, so a crop rotation strategy produces limited results given the density of canola currently grown on the Prairies.

Another cultural strategy proven to have limited value is tillage to bury the sclerotia. Ziesman says because sclerotia can survive three to four years in the soil, and the majority of fields are sown under reduced tillage, this strategy does not have much impact on sclerotinia infection.

Breeding for resistance
Canola breeders have been working diligently to develop varieties resistant to sclerotinia. Stone’s 1980 article stated, “The search for resistant lines of rapeseed is an ongoing concern for plant breeders and pathologists. This task is extremely difficult due to the vast pathogenic potential of the fungus and in the near future, at least, does not appear promising.”

If the near future is 2009, then plant breeders have made some progress. DuPont Pioneer was first on the market in 2009 with a variety partially resistant to sclerotinia. For 2015, they have four varieties with the Pioneer Protector trait for sclerotinia. The company claims over 60 per cent reduction in sclerotinia incidence. However, depending on environmental and agronomic conditions, the company advises growers may still need to apply a fungicide application to control sclerotinia in the crop. Bayer CropScience has also entered the market with InVigor L160S that shows tolerance to sclerotinia.

“We don’t have resistance to sclerotinia in any crop. In canola, we have tolerance. That means when disease pressure is high, it can help to reduce disease, but you may still have disease loss and need to spray,” she explains.

Another benefit of the tolerance trait is that it may provide growers a bit more leeway in fungicide timing.

Fungicide control
Fungicide control has long been the cornerstone of sclerotinia control. According to Stone’s article, “Research studies conducted by Dr. J. Dueck, Agriculture Canada, Saskatoon, and Professor R.A.A. Morrall, University of Saskatchewan, Saskatoon, in 1978 demonstrated that a single application of Benlate applied by air to rapeseed fields effectively controlled the disease. Disease control resulted in increased rapeseed yields and a significant reduction in the number of sclerotia in the harvested seed.”

Benlate, from DuPont, received temporary registration for control of sclerotinia stem rot in 1980. Today, there are 10 fungicides registered for sclerotinia control in canola. Most commonly they are applied between 20 and 50 per cent bloom. Several can be applied twice under heavy disease pressure – the first at early bloom and the second seven to 14 days later if conditions warrant.

“Fungicide control is the most common tool for sclerotinia control. Some producers are spraying every year as a standard practice, but this is not a good strategy. Spraying every year when not warranted puts added pressure on fungicide resistance selection pressure,” Ziesman cautions.

As part of a fungicide control strategy, Ziesman says growers should rotate fungicide groups to help slow the development of fungicide resistance. She suggests they also use sclerotinia forecasting tools to help guide the decision to use a fungicide.

Petal testing was developed in the early 1990s to help determine sclerotinia infection at early bloom stage, but had limited adoption by growers. Ziesman says the test took three to five days to get results, and accurate sclerotinia identification was difficult. Growers collected and grew out petal samples in petri dishes and then assessed for fungus growth.

More commonly used by growers is the sclerotinia stem rot checklist developed by the canola industry. It is field-based and provides a risk assessment for sclerotinia development. Available on the Canola Council of Canada website, the checklist assesses historical disease and crop rotations, and looks at conditions favourable for disease development.

Ziesman says sclerotinia typically develops when June weather is rainy with soil at field capacity. In late June and July, rainy days interspersed with windy days help the disease to develop and spread. Conversely, if the soil surface is dry during this period, the sclerotia may not germinate and the apothecia may not develop to release the ascospores that spread the pathogen.

Another forecasting tool is being investigated by Lone Buchwaldt at Agriculture and Agri-Food Canada to evaluate the usefulness of sclerotia-depot in combination with the existing sclerotinia stem rot checklist (see Top Crop Manager western edition, September 2014, pg 22). The hope is to develop a mathematical model based on weather data to forecast sclerotia germination, disease severity and canola yield. The project started in 2014 and will run through 2017.

Looking back at Stone’s article in 1980, researchers have made great progress in understanding and developing control measures for sclerotinia, but the issues then still resonate today. “Future research aimed at resistant varieties, biological control, and improved disease prediction to enhance chemical control should negate sclerotinia stem rot as a limiting factor in rapeseed production,” Stone states.