In 2013, two University of Guelph weed scientists began collaborating on alternatives to herbicides for weed control. The report, by Francois Tardif and Mike Cowbrough, was released in 2016. 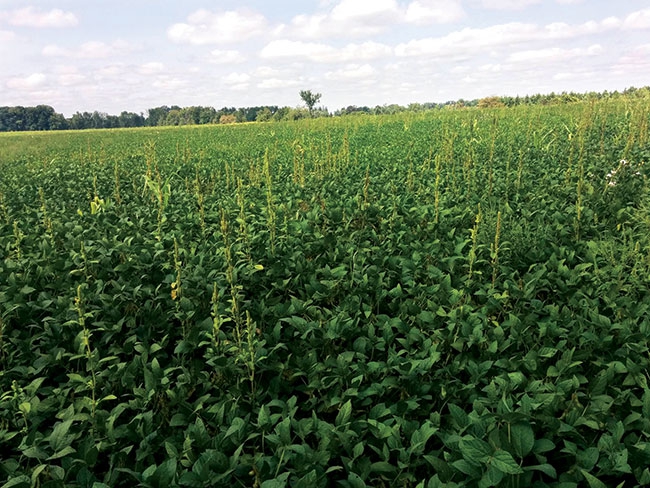 The study began after the Environmental Commissioner of Ontario’s office released a report looking at herbicide resistance. It concluded farmers were relying too much on herbicides. Instead, the report said, alternative cultural methods exist, they could save the day and should be promoted.

“So, we tried to address the issue. In the research, Mike’s interest was to show how easy it is to implement these methods. I was always interested in preventing resistance,” Tardif says.

Many cultural methods can be used to kill weeds or even prevent their germination. Indirectly, the crop becomes more competitive.

“As it becomes more competitive, it can exclude the weeds. That way, in principle, you would reduce the dependency on herbicides,” Tardif says. “With preemptive cultural control, instead of using three shots of herbicide, maybe 80 per cent control could come from two herbicides and the rest from the cultural management.”

With the aid of graduate student Tasha Valente, the weed professors set up trials at research farms in Elora and Woodstock, each in 2014 and 2015. They tried pumping up the seeding rate, adding 50 pounds of nitrogen and controlling light availability for weeds.

An important part of the research was that the trials were done on sites with a “medium” amount of weeds present, as opposed to under weed-free conditions. Common ragweed, lamb’s-quarters and redroot pigweed were the main broadleaf weeds present in the fields. The grassy weeds were primarily green foxtail at the Elora site and barnyard grass at the Woodstock site.

The researchers either applied no herbicide at all, or a very low rate of herbicide, so they could monitor impact of the cultural control methods on weeds at both sites.

Results
“What we found is that you may get some positive effect on weeds with these methods, but they are not consistent over years and sites. So, you can’t really say, ‘always do this and it will work,’” Tardif says.

At first, there was a modest trend showing that the high seeding rate reduced the amount of weeds in the field.

“It was a one to five per cent reduction in weed biomass, depending on the year. Over four site years, it was significant for yield only once, and that year we had a very low yield because of a dry season,” Tardif says. “Under conditions where the soybeans were able to grow normally, there was no real benefit to increasing seeding rate. You didn’t get back that 42 per cent increase in the farmer’s investment.”

The nitrogen trial was suggested by a soybean specialist who, under weed-free conditions, had seen soybeans get a “kick-start” when extra nitrogen (N) was supplied.

So, the researchers compared the effects from the normal practice – letting soybeans produce their own nitrogen supply – to stimulating the site with a spring pre-plant treatment at 50 pounds of N per acre. Their site, however, was not weed-free.

That first result on weed biomass in 2014 was either neutral or next to it. The second year, results were negative.

“In 2015, [nitrogen fertilizer] increased the weed biomass by 50 per cent. We had better weeds,” Tardif says. “Basically, they sucked up the nitrogen, so we made the weeds tougher.”

That effect has been seen before. It’s called nutrient luxury consumption. Many weeds are adapted for stress conditions. Given a boost in nitrogen, they collect it and put it into a reserve. Foxtail, lamb’s-quarters and pigweed tend to be luxury consumers.

Two other cultural control options for this project involved light.

To increase shading of the weeds with early canopy closure, the researchers tried growing a standard slim soybean and a very bushy soybean cultivar. But the researchers didn’t see any differences.

“If there are differences, they are very subtle. There were not enough differences in the branching pattern to affect shading,” Tardif concludes.

The team also checked claims that tillage in the dark might reduce the number of weed seeds that germinate. In about half of the studies that have been published on the topic, there is evidence that night tillage reduces weed germination. A short exposure to light after being buried seems to trigger germination in the weeds. If the tillage is done at night, they don’t get that needed light.

“It didn’t make a big difference. Whether we cultivated in the day or at night, we had the same number of weeds,” Tardif says.

Row spacing studies for soybeans were not included, Tardif says. Thirty-inch row spacing used to be common, but it has been replaced with 15-inch spacing for soybeans. Making rows tighter than 15-inches would quicken canopy closure and would increase competitiveness of the crop, but it would come at the cost of more disease. It also would require changing planters.

Cover crops planted in the fall and left to grow until the soybean crop is well established may be able to reduce weed competition. Tardif and Cowbrough have that option under a longer-term study.

“We have a long-term rotation of corn-soybean-winter wheat where we compare the normal practice with an increased seeding rate and cover crop. So far, we have two summers of data,” Tardif says.

“We don’t yet see a reduction in yield, and we do see some reduction in weed population, but the effect is subtle. We need at least two more years to see accumulative effects. For instance, the weather last summer got pretty dry. The cover crops started to suck up the moisture and caused the normal crops to suffer. That’s not supposed to happen, but it did.”

A third project was planned to look at weed seed destruction. It was delayed two years, but now is underway.

Tardif says the first trial in Canada with a Harrington Seed Destructor was conducted last October in Swift Current, Sask. Collected weed seeds from both Eastern and Western Canada were put through the machine to determine its effectiveness at destroying the seeds. Initial results from germination tests may be available soon, however, the project is planned to run for at least two years.

Conclusions
While the effort to find cultural controls that could exploit the weed life cycle has been disappointing to date, the weed scientist says it also has highlighted at least two issues: the need for more competitive crops and the need for broad public support to encourage “friendly” farming practices.

“We probably need a better partnership between breeders and weed scientists to come up with more competitive cultivars.”

Breeders use a weed-free environment when developing and selecting new varieties. There’s an assumption that new lines will be in herbicide-protected, weed-free fields, without any need to compete against unwanted weeds. If breeders selected for a trait like rate of canopy closure, it could be a strong cultural assist for farmers.

Tardif’s other observation is around the cost of integrated weed management at a level that meets the recommendations for using cultural controls.

“It’s asking farmers to take the brunt of integrated weed management and the cost of that without help. Next, they are either going to be forced by law to do it, or they will need help financially. Cultural weed management is good, but it’s a very general recommendation. When you look at how to implement it, it’s not that easy.”