Buyers and sellers have long been able to hedge their winter wheat marketing decisions on both the Kansas City Board of Trade (KCBT) and the Chicago Board of Trade (CBOT), Tjaden- Lepp says. She notes these markets are so large that they will quickly become the price setters for the crop in Canada and companies will set their own Basis for Prairie delivery.

Tjaden-Lepp says that with winter wheat prices being set in US dollars the currency exchange rate will play a big role in setting producers’ profits in the future. She says it might be a good idea for producers to adopt a currency hedging strategy, like hog producers use, to protect themselves.

“Winter Cereals Manitoba and the Saskatchewan Winter Cereals Development Commission have kept very, very far away from the whole Wheat Board issue because their members’ views fell on both sides of the debates,” says the groups’ executive director Jake Davidson in Minnedosa, Man. “However after talking with the grain companies we believe that producers are going to see a lot more opportunities now that this [the market] has opened up. Several companies who have not really taken a role in marketing winter wheat before have told us that they are going to be much more aggressive in the marketing and the searching out winter wheat now that the Wheat Board’s strict control over the product is gone. They see a profit in it.”

Davidson believes there is going to be quite a change in the way the whole system will operate. He says that a couple of years from now he doesn’t think you’re going to see a boatload of number 1 or number 2 leave a port. Instead, he says, you will see boatload of specific product leaving a port.

“For example, a customer might buy wheat with 11 ½ protein, a certain falling number, maximum dockage of and whatever other specifications, like colour, that they might have,” Davidson says. “We just have a gut feeling that it’s not going to be as important for wheat to be a number 1 as it is for it to be what the market wants. The market for number 1 isn’t that big.  A downwards shift in the type or the quality of what people grow may become an absolute fact because people are going to grow more what there’s a demand for; grades won’t matter as much.”

Western Canadian winter wheat markets will continue to be anchored by the huge demand from the domestic ethanol and feed market, Davidson says. This market has become so large in recent years that it has started to overshadow the CWB in the sector. Growers found that the freight savings they gained by selling to a local buyer really added up and left them with a lot more dollars in their pockets.

Like Tjaden-Lepp, Davidson believes it will take a bit of time for the new marketing system to fully sort itself out. At present there’s no consistency in the contracts that are being offered by the different grain companies. However, the information Davidson is hearing from the industry players is making him very optimistic about the future. 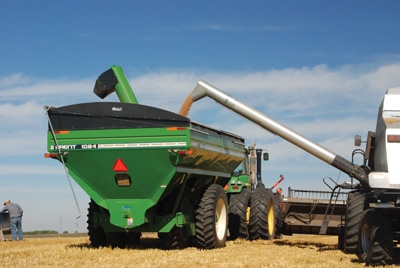