Pulse crops bring many advantages to cropping systems in Western Canada, including environmental, agronomic and economic advantages. Until now, pulse crops, including pea, lentil and fababean, have been grown as spring seeded crops. However, researchers in Alberta are seeing potential for winter pulse crops in the southern parts of Alberta.

In 2008, researchers with Alberta Agriculture and Rural Development (AARD) initiated a three-year project to assess the feasibility of winter pea, winter lentil and winter fababean. Plots were seeded in Lethbridge, Brooks, Bow Island, High River, Lacombe and Edmonton. “We have had success with winter pea and winter lentil in southern Alberta and have extended the research for another year,” explains Mark Olson, Unit Head – Pulse Crops with ARD’s Research and Innovation Division in Stony Plain. “However, the research was not very successful at Lacombe or Edmonton, so we have not continued in those areas for now.”

The winter pea and winter lentil varieties used in the trials are from USDA germplasm and work done by Dr. Kevin McPhee, a researcher formerly at Pullman, Washington, and now at North Dakota State University, and his colleagues.

“These varieties are a regular pea crossed with a winter Austrian pea; however, they don’t have coloured flowers or dark coloured seed coats like the Austrian varieties,” says Olson. “They are clear coat varieties, just like spring green and yellow pea; however, the seed size is a bit small for the human food market.” McPhee and his colleagues are continuing to work on better lines with improved winter hardiness and seed size.

“From the results of our research, we believe there is potential for winter pea and lentil in southern Alberta south of Highway 1 in the Brown and Dark Brown soil zones,” says Dr. Ross McKenzie, Research Scientist – Agronomy with AARD’s Research and Innovation Division in Lethbridge. “We don’t recommend these crops north of Highway 1 until the winter hardiness of varieties are improved. Where they have potential, there are some fundamental production things that have to be done correctly for success.”

Both winter pea and lentil must be direct seeded in the first two weeks of September, preferably into standing stubble, and must be seeded into good moisture to guarantee good germination and emergence. “These winter crops are similar to winter wheat, and fall moisture conditions are very important,” adds Olson. “Winter pulses are also a larger seed than winter wheat and require quite a bit more water to start the germination process.” Moisture conditions in drier falls will be a limiting factor to production.

“The seeding window is actually quite narrow, and putting them in earlier than the first of September isn’t really an advantage,” says Olson. “We tried seeding earlier, but the plants tended to get too large and lanky and too far advanced, so in the spring they didn’t come back as well. Typically these winter varieties will die back or freeze right to the scale nodes. If it is a good winter, there will be a bit of green leaves at the base of the plant, but if it is a tougher winter, they will die back and start regrowing from just below or at ground level.”

From the research, a seeding rate of 1.5 times (the normal target plant population is seven to eight plants per square foot for spring field pea) is recommended and all seed should be inoculated. The higher seeding rate doesn’t increase a farmer’s seeding costs because the seed size of these winter varieties is significantly smaller (range is 125 – 150g per 1000 seed weight). “For weeds, products such as Edge can be used for initial weed control and if necessary some in-crop grassy weed control,” says McKenzie. “However, if you have a good stand establishment and the crop gets a good head start with the weeds, you may not need much in-crop control.”

Depending on the conditions, harvest is usually between the third week of July to the middle of August. “If the season is drier than normal, the crop will mature sooner or if it is wetter, it will mature later into August,” explains McKenzie.

“The yields for winter lentil were comparable to spring lentil yields; however, winter pea usually showed a 20 to 30 percent  yield advantage over spring pea. For example, in one trial spring pea yielded 30 bu/acre, while our winter pea yielded 80 bu/acre because of some very timely early rains and dry conditions after mid-June. So if you end up with a drier than normal June into July, then the winter crop can really perform.”

In areas with pea weevil concerns, researchers are still trying to find out more information. “There is a concern that the fall seeded pulse crops could act as a green bridge to spring seeded pulse crops in heavily infested areas,” says Olson. “However, we still have lots of unanswered questions at this time.” Olson has also developed a Crop Decision Support System Checklist to help growers determine if they have all of the right conditions in place to reduce the risk of seeding winter pea or lentil in southern Alberta and to improve their chances of success.

Another component of the research is an assessment of the composition and cooking quality of these winter pea and winter lentil varieties. “Once the samples were harvested, they were sent to Dr. Thava Vasanthan at the University of Alberta to conduct a constituent analysis to assess the fibre, starch and protein content, and other fractional components of winter pulses compared to the spring types. As well, Dr. Gene Arganosa at the University of Saskatchewan is doing a cooking quality assessment of the whole seed for field pea, comparing winter and spring types. “We are hoping to determine whether there might be some unique constituents or functionality in the winter varieties as compared to spring,” says Olson. “The information will also help us determine if these winter crops meet the quality parameters of the food and feed marketplace.”

Next step field demonstrations
The three-year project has been extended for another year, with a larger five-acre plot of winter pea and winter lentil seeded at Lethbridge in the fall of 2011. “We brought in some larger quantities of the winter pea and lentil varieties we were working with in our research to assess on a large field scale,” says Mc-Kenzie. “They arrived a bit late, so we didn’t seed until the third week of September and with the dry conditions, we had to irrigate enough to get the crop to germinate. Our goal is to shift the project from small research plots to larger on-farm demonstrations. We hope to increase the seed lot enough so that interested farmers can try their own demonstrations in the fall of 2012.”

“I like winter crops and see some opportunities in the future,” adds McKenzie. “Winter crops usually yield a little better, are more competitive with weeds and often get ahead of insects and diseases. They also offer several benefits to spreading out workload and machinery use on farm, as well as expand market opportunities. Winter pea would also fit in well with a winter wheat rotation and in the future if we can get a broader selection of winter crops, this could work well for some growers. Winter fababean did not overwinter or perform very well in any of the locations and until more winter hardy varieties become available, they aren’t a good option. Current work on winter canola is showing some promise as another winter crop option in Alberta.” 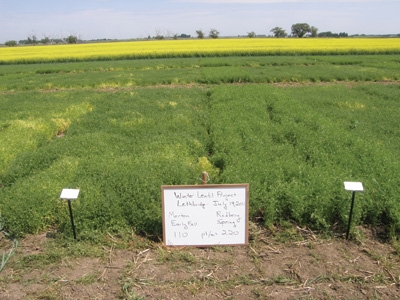 Researchers are digging into the agronomics of winter pulse production. Pulse crops bring many advantages to cropping systems in Western Canada


Related
Winter pea and lentil left out in the cold
Assessing winter wheat stands for winter survival
New pea and lentil inoculant
What is new in pea, lentil and chickpea varieties?