Economic return and fertilizer use efficiency from variable rate management varied between fields and between farms, as did canola yield. 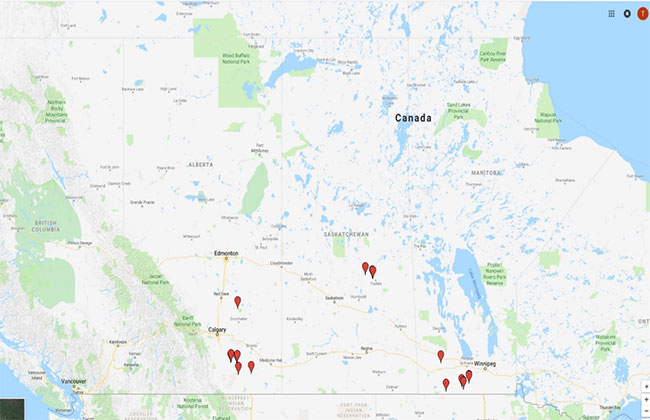 Nitrogen fertilizer is a costly input for crop production, and canola is a heavy nutrient user, making fertilizer management an important strategy for growers of the crop. The concept of precision farming or variable rate management of fertilizer has attracted a lot of attention, and growers often question how it can work in their management systems and if it can be improved upon.

“There are a number of organizations and crop consultants who have developed systems to variably apply fertilizer to optimize the return on fertilizer and optimize crop yield,” says Alan Moulin, honorary research scientist with Agriculture and Agri-Food Canada (AAFC) in Brandon, Man. “Building on some earlier research we had completed in Manitoba, we wanted to take the next step to a broader field-scale project. In the previous study, we monitored crop yield over five years using a yield monitor, and after analyzing the data realized there was a consistent pattern of high, average and low-yielding zones in the field.”

Moulin initiated a four-year multi-site study across Western Canada in 2014 to examine the impacts of variable rate nitrogen fertility programs on canola yield in areas with consistently low, average and high production. During the project, 27 site years of data were collected from commercial farms over four growing seasons in Manitoba, Saskatchewan and Alberta. The trials were conducted in collaboration with growers on field-scale plots using their own seeding and harvesting equipment. Moulin worked with grower associations in each province to help identify producers who already had three to five years of historical yield maps for their fields to participate in the project.

“The study was designed to assess the application of management zones based on the yield maps, and to develop individual field maps showing high, average and low-yielding zones on each field,” Moulin explains. “Based on spring soil test results and the target yield goals for average yield set by each grower, we set up a program to apply four levels of N fertilizer treatments across the field, comparing zero, 50, 100 and 150 per cent of the recommended rates. The other nutrients were applied at recommended soil test rates to ensure they weren’t limiting crop production.”

The yield goals were adjusted for each zone, and producers uploaded the program into their seeder to apply fertilizer variably across their fields and management zones. The size of the treatment plots was based on two swather-widths wide to eliminate variability. At harvest, the protocols were to calibrate either weigh wagons or local commercial scales to further reduce the variability between farms and combine equipment.

Moulin notes that there was a tremendous amount of data collected across all of the sites and years of the project, with lots of variability between farms, fields and soils. Along with soil test data, other information was collected, such as soil texture, soil pH conductivity and satellite imagery, terrain attributes, and the digital elevation data that is part of yield monitor data collected by the combine.

“We have analyzed the yield response to fertilizer over the four years of the project, and overall the results show that the Manitoba N fertilizer recommendations for canola are appropriate,” Moulin says. “The economic return and efficiency of fertilizer use from variable rate management varied between fields and between farms, as did canola yield. Soil properties and the interaction with canola variety, growing season precipitation and temperature also varied considerably with respect to yield. The 100 per cent N rate worked well across the high and average yielding zones, and to a lesser extent to the low zones; however, the fertilizer rate at 150 per cent actually resulted in a little less yield than the full rate. My colleague, research scientist Mohammad Khakbazan has completed a detailed analysis, which has been submitted for publication.”

The analysis shows that variable rate application paid off in some fields and in others it did not, relative to applying fertilizer uniformly across the field based on average yields and at 100 per cent of recommendations. Overall, nitrogen and production zones were significant, with variable rate management generating up to a net $65 more per hectare on average, compared to average zones. Variable rate management resulted in about eight per cent less nitrogen use, as nitrogen supply matched crop demand more effectively.

Farm location had significant effects on canola yield, with profitability ranging from -$91 to +$352 per hectare. The data can also be used to develop profit loss maps across the field, which can show whether or not those low-yielding zones are making money, or if it may be appropriate to revise the management for those zones and put the priority on the high-yielding areas. Differences in management, including agronomic practices, variety selection and types of fertilizer, as well as soil properties, elevation and terrain attributes all impact fertility and should be considered, along with historical yields, when planning out a variable rate fertility program or studying fields that utilize this technology.

Moulin adds that developing and integrating an effective variable rate fertility program is very complicated, so carrying out field-by-field analysis is paramount to potential success. “Yield maps are an extremely valuable source of information, although data collection can be time-consuming, and if equipment is not working at harvest, growers likely can’t afford to take the time for repairs. In this project, we did have several other fields that we had to eliminate because, for various reasons including technical hurdles with the prescription maps or yield monitors not working, we weren’t able to collect the data.

“Nevertheless, that yield data is quite useful and does reflect overall trends in terms of relative variability of yield within the field, so it is worthwhile for those growers who want to consider this as part of their management. Thorough preparation well in advance of seeding, combined with post-harvest or pre-seeding soil sampling are recommended to ensure accuracy when carried out at busy times, especially in regions with short growing seasons.”

With the large amount of data collected in the project, researchers continue to analyze and report on various aspects. “We have identified one particular terrain attribute that may account for a lot of the variability, so we are looking at the potential to improve prescription maps by including that terrain attribute,” Moulin says. 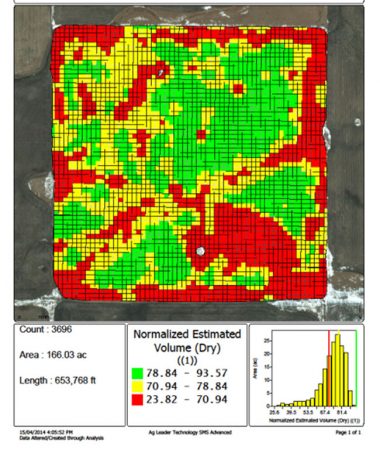 Example of a field map showing high, average and low-yielding zones across the field. 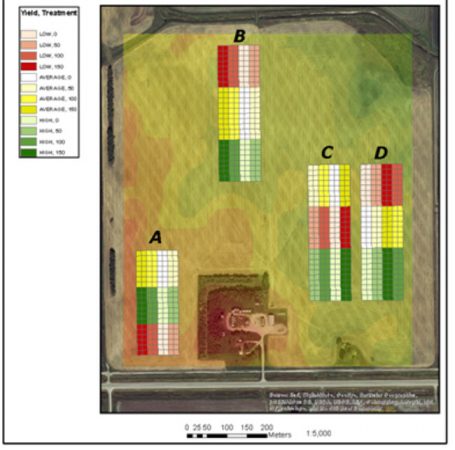 Comparison of average canola yield at the four levels of N fertilizer treatments across low, average and high-yielding management zones over the four years of the project.

“The next step includes looking at relationships between soil properties and terrain attributes, which also reflects drainage in systems, where water is flowing, soil erosion and nutrient management. Further research is required to account for fertilizer requirements of new canola hybrids and other new crop varieties, and the N-supplying potential of soil as it varies with management between farms and in the landscape. These studies will identify management or soil properties that resulted in significant canola yields observed for zero per cent of recommended N fertilizer rates on many farms in the previous study.”

The field-scale research and model development to assess different management systems in a broad range of crops continues, now led by research scientist Taras Lychuk. This three-year project is part of a larger collaboration with other researchers and part of Living Labs, which will also include assessing consequences of climate change, precipitation and temperature and field hydrology, among other aspects. This model development for assessing different management systems complements precision agriculture management.