Application timing is key to fungicide effectiveness. But changes in pathogen concerns, new fungicide products, new crop varieties and other issues can raise new questions about the optimal fungicide timing for a grower’s specific situation.

For cereal diseases on the Prairies, researchers are looking into the latest questions and generating practical answers about fungicide
timing.

Flag leaf timing for foliar fungicides
A 2010-12 fungicide timing project was sparked by grower questions after a 2009 memorandum from Canada’s Pest Management Regulatory Agency (PMRA). The memo clarified that unlabelled tank mixes of registered control products could be used in crop production under certain conditions. For cereal growers, that policy opened up the option of mixing a foliar fungicide with a herbicide and applying the mix at herbicide timing, when the crop is in the seedling stage.

A single pass to apply a herbicide and a fungicide is convenient. But is herbicide timing effective for controlling leaf diseases and protecting yield potential in cereals?

To answer that question, Dr. Kelly Turkington, a plant pathologist with Agriculture and Agri-Food Canada (AAFC) at Lacombe, Alta., led the three-year project in collaboration with other researchers from AAFC, the University of Saskatchewan and Alberta Agriculture and Rural Development (AARD).

In an earlier trial in barley, Turkington and his colleagues had found that a fungicide application at flag leaf emergence had the biggest benefit in terms of reducing disease and increasing yield, while a full-rate fungicide applied at herbicide timing had limited benefit.

For the 2010-12 project, the researchers wanted to assess fungicide timing options in more detail, including split applications. “Growers were interested in applying a half-rate fungicide with their herbicide, and then if they needed an additional application, they could apply it at flag leaf emergence at either a half rate or a full rate,” notes Turkington.

The trial involved combinations of the herbicides Axial + Frontline (with the active ingredients pinoxaden and florasulam) and the fungicide Tilt (propiconazole) applied to malting barley at the two- to three-leaf stage, five- to six-leaf stage, or the flag leaf stage. In 2010, the trials were at Lacombe in Alberta, and at Melfort and Scott in Saskatchewan. In 2011 and 2012, the researchers added sites at Lethbridge, Alta., Brandon, Man. and Indian Head, Sask.

The results confirmed the effectiveness of flag leaf timing. “We found that if you are going to use a fungicide and you want to get the most out of it in terms of leaf disease management in barley, then target your upper canopy leaves. You want to directly protect those leaves that contribute most to grain filling and yield,” notes Turkington.

He adds, “The split application did not perform any better than a single application at flag leaf emergence.” This was consistent with some earlier work in 1999 and 2000 that they did with split applications using half rates at Lacombe and Beaverlodge, Alta., and Melfort.

Turkington is currently leading a small trial at Lacombe for a preliminary look at the same timing question, but this time in wheat. “It’s sort of a companion trial to our barley trial. We’re just gathering the second year of data, and we’re seeing somewhat similar results,” he says.

So, the upper canopy leaves in cereals are the most important leaves to protect from disease because the sugars and starches produced by these leaves make a big contribution to grain fill and yield. In wheat, the key leaves are the flag leaf and the penultimate leaf. In barley, the top three leaves are important, especially the penultimate leaf and the third leaf; the flag leaves in some varieties are quite small, so they are not always as crucial.

But why doesn’t applying a foliar fungicide at the seedling stage help protect later leaves? The main reason is that these fungicides primarily tackle a pathogen when spores are actively germinating on the leaf surface, so they are best at protecting those leaves that have unfurled just before spray time. These fungicides have a tough time eradicating the pathogen from within lesions that are more than about a week old. And these fungicides don’t move backwards from the leaf into the rest of the plant.

“Unlike some herbicides, none of these fungicides move backwards, down to the base of the leaf and into the plant itself and the growing point. So they will not provide protection for any new tissue that emerges after the fungicide application,” explains Turkington. “All of the fungicides we deal with are xylem mobile. So, if they are systemic fungicides, they move via the water transpiration stream up from the base of the leaf to its tip, not backwards into the plant. Also, the extent of movement depends on the fungicide as some products, although systemic, are only locally systemic, meaning they have limited movement once they have penetrated the plant surface.”

In addition, these fungicides typically are active for only two to four weeks, depending on the product. As a result, if you apply the fungicide at herbicide timing, there won’t be much activity left by the flag leaf stage. Finally, for leaf spots like net blotch, scald, tan spot and septoria, infested crop residues continually produce spores, so they continue to threaten any leaf tissue that emerges after a herbicide timing application.

These trials build on some preliminary work he and his colleagues conducted in the 1990s. That earlier project found a reduction in leaf disease at the two- to four-leaf stage from using a fungicide seed treatment. So it is possible that a seed treatment would not only benefit seed and seedling health, but also provide some leaf disease suppression early in the season.

“The seed treatments are all xylem mobile, so when they are absorbed by the seed tissue and plant tissue, they are not moved down into the root tissue; instead they are moved up with the water transpiration stream,” says Turkington. “As the young leaf tissue emerges from the soil, the seed treatment fungicide is drawn up into that tissue with the water transpiration stream, providing some disease protection there.”

FHB timing or leaf spot timing or both?
Head emergence timing is recommended for fungicide applications to manage Fusarium head blight (FHB). But when should you apply a fungicide if your field has both FHB and leaf disease?

“With Fusarium head blight becoming an issue, many growers are asking: ‘Do I really need to spray at flag leaf time and then again seven to 10 days later when the head has emerged? Or can I get reasonably effective leaf spot control if I delay spraying until Fusarium head blight timing?’ ” says Dr. Randy Kutcher, a cereal pathologist at the University of Saskatchewan.

To answer this question, Kutcher and Dr. Michael Harding, a plant pathologist with AARD, are leading a fungicide study in wheat in collaboration with their colleagues at various research centres. The study, which started in 2013, has sites at Saskatoon, Melfort and Indian Head in Saskatchewan, and at Brooks, Lethbridge and Lacombe in Alberta.

The researchers are comparing three fungicides: Folicur (tebuconazole), Prosaro (prothioconazole and tebuconazole), and Optimum, a biological fungicide that uses the bacterium Bacillus subtilis. They are applying these products singly, and applying Optimum in tank mixes with the two other products.

Don’t forget your other tools
Fungicides are valuable tools, and proper timing is important for getting the most benefit from your fungicide applications. But Kutcher reminds growers to also consider other tools as part of an integrated approach to disease management.

Both Kutcher and Turkington point out that fungicide has become a more important tool for cereal producers on the Prairies in recent years. One reason is that many producers are using very short rotations, such as canola-wheat. “Usually to see a benefit from crop rotation for cereal leaf disease management, you have to leave two full years between cereal crops, so wheat-canola-peas-wheat, for example. If you have only a single year of a non-host crop, such as canola, you’re not going to see that benefit,” says Turkington.

He also notes that many cereal varieties don’t have a complete package of resistance to the diseases of concern. “In malt barley, for instance, some varieties don’t have much resistance at all to the leaf diseases, while some of the newer varieties might be good for net-form net blotch or spot-form net blotch but not both, and certainly not for scald. If we had a complete suite of resistance genes in the plant targeting all the issues that might attack it, then we might be able to rely more on disease resistance.

“So we’re not using rotation, and our varieties in some cases are not resistant to the diseases of concern. So then we look at other strategies, and that’s where fungicides come into play.”

Wet weather in parts of the Prairies in recent years has also played a role in increasing fungicide use. “With the weather we’ve been having in the last four or five years on the Prairies, growers have had some pretty good returns on fungicide application. But the diseases in general are really weather-dependent. If we get a drier late June and early July, the growers may see less return on fungicides,” notes Kutcher.

He emphasizes, “Fungicides are just one tool. Other tools, such as resistant varieties, crop and varietal rotation, and knowledge of the pathogen, can be as effective.” 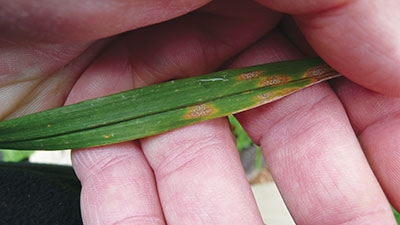