Fungicide resistance in Western Canada in cereal crops has not been identified as a problem so far; however, growers and industry should use best management practices and planning to keep it that way. The trend towards shorter crop rotations and a dramatic increase in the use of foliar fungicides for disease management in cereal crops over the past few years warrants caution.

“Fungicide resistance is not a problem in Western Canada at the moment,” says Dr. Andy Tekauz, plant pathologist in Winnipeg, Man. “I don’t believe there are reports of any foliar fungicides or seed treatments currently being used in cereals here in the west that have shown reduced efficacy as a result of the pathogen showing resistance. However, these things do happen with other crops and in other situations, particularly when using a greater number of fungicide applications every growing season, and it could happen with cereals down the road.”

For example, with crops like potatoes and a disease called late blight, growers can make up to 10 fungicide applications during a growing season. This is a situation where growers have to manage resistance and not use the same product time after time, plus use best practices the same way as they manage for herbicides. In comparison, most cereal growers typically use a single foliar fungicide application during the growing season. Occasionally two applications of a foliar fungicide may be used – an earlier application to cover off some of the leaf diseases, and a later application to cover off Fusarium at heading time. Tekauz adds that is one of the reasons there really hasn’t been a problem here with cereals and is likely not to be in the near future.

However, in the last couple of years, the level of fungicide use in Canada against Fusarium head blight (FHB) and other diseases in cereal crops, particularly in wheat, has increased quite dramatically. “According to Statistics Canada census data from 1996, 2001 and 2006, the frequency of fungicide application has really gone up in the last few years,” says Dr. Bruce Gossen, research scientist with Agriculture and Agri-Food Canada (AAFC) in Saskatoon, Sask. “Instead of one field in 10 in 1996 receiving a fungicide application, now it is closer to eight or nine fields out of 10 receiving at least one foliar fungicide application every year. That’s a significant increase in fungicide use.”

One reason for caution is there is always the potential for problems with diseases like FHB where conditions may push the pathogen to select for insensitivity. “Those insensitive isolates are already there at a very low level, so using the same fungicides time after time may select for insensitive isolates, and they can quickly build up in a population,” explains Gossen. “This is especially a challenge where there are a limited number of effective fungicides for the particular pathogen.”

FHB has a sexual stage, where a lot of re-combinations are occurring and new genotypes are being developed. It also has an airborne phase, so once insensitive isolates are in one field, they can quickly spread to many fields close by. Because it is polycyclic, FHB builds up quickly on susceptible plants under good conditions and many generations can occur during the year.

Although Gossen doesn’t expect to see fungicide insensitivity in cereals in the near future, there are examples of crops in Western Canada where problems were identified and, fortunately, timely solutions were put in place. He explains that a few years ago a fungicide was introduced to control a disease problem in chickpeas. It worked really well, growers liked it, it was easy to apply and had high efficacy. However, the type of chemistry had a risk where pathogens could develop insensitivity with a simple change, and within five years everything was insensitive to that pathogen, not just in Saskatchewan, but also in Alberta, North Dakota and across the production area. Fortunately the problem was caught in time, the life science industry quickly changed their recommendations and growers moved to a different chemistry, averting a disaster for chickpea growers.

“Although we don’t expect to see that happen in cereals, that example emphasizes the importance of rotating fungicides and making sure agronomic practices are not pushing the pathogen to select for this insensitivity,” says Gossen. “With FHB, for example, using a combination of FHB resistant varieties and foliar fungicides when needed is likely to be more effective as a strategy, to drive the entire population of the pathogen down. Lower pathogen populations means fewer individuals that might carry the specific mutation that allows for insensitivity.”

Similar to herbicide management, good stewardship of fungicides means planning ahead and implementing best practices. “Varietal selection is important, and there are wheat and barley varieties available with MR resistance ratings to FHB, for example,” says Tekauz. “We always stress variety selection even though it’s not always easy as a number of diseases that producers are faced with don’t have a top level of resistance to everything. But if FHB is the top concern in a region in the Prairies, then choosing a variety of wheat or barley that has a resistance rating of MR is a recommended strategy.”

Gossen says using good quality seed that is disease free, thereby improving emergence and plant stands, is a good practice as well. “Make sure to have a cropping rotation that is sustainable for your farm,” he adds. “Crop rotations mean different things to different farms and geographic areas, but too short of rotations can add risk to the system. For example, make sure if you or a neighbour had a big FHB disease problem that carried over in the trash, then don’t plant a highly susceptible crop of that same cultivar and same crop species right beside it next year.”

The use of chemistry, and where available a forecasting system, is also part of a good management strategy, notes Tekauz. “Fungicide use, especially foliar, can certainly benefit from disease forecasting models if available, such as for FHB in Manitoba. Rotating fungicides where possible is also recommended; however, for cereals, in most instances although farmers may be using different products, the fungicides from the various companies mostly have the same mode of action, with the two main groups being either Group 3 or Group 11.”

FHB is only one of the many disease issues growers deal with. Thinking of fungicide rotation the same way as herbicide rotation may be more work, but it reduces the chances of a potentially bigger problem to deal with later.

“Good stewardship of fungicides means using best practices and good agronomics to reduce the risk of developing resistance problems in cropping systems,” says Gossen. “I always encourage growers that forward planning during the winter can save them a lot of headache later. About 95 per cent of disease management should occur before the crop goes in the ground.” 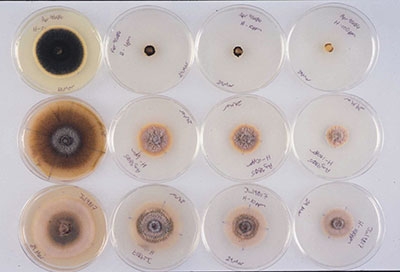 The response of an insensitive isolate (bottom) compared with a sensitive isolate (top) and an unusual  isolate (middle) after two weeks of growth on media + fungicide. The concentration of fungicide’s active ingredient increases from left to right: 0 Fungicide resistance in Western Canada in cereal crops has not been identified as a problem so far.