A search on the Internet for WBC used to bring up information on white blood cells. More likely today, it refers to the western bean cutworm (WBC) – a pest that is native to North America, but which, since 2000 has been successfully migrating north. Starting in 2008, WBC moths (adult phase) were seen all across Ontario. 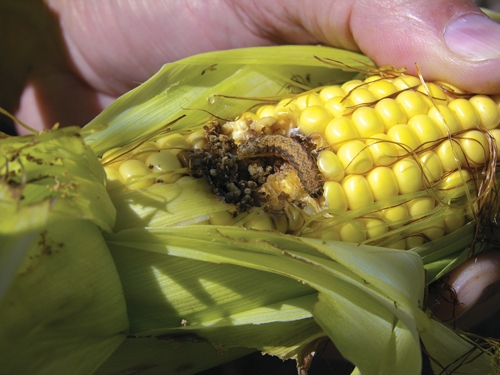 Western bean cutworm damage in corn. A search on the Internet for WBC used to bring up information on white blood cells. More likely today

WBC overwinter as larvae within the soil. Adult moths emerge in late June and begin laying their eggs on the upper side of corn leaves, usually near the top of the plant in the pre-tassel stage. As corn starts to tassel, WBC can move to neighbouring edible bean fields to lay eggs on the underside of leaves deep in the canopy.

After hatching, young larvae will feed on the tassels and silks of corn until they are large enough to burrow into the ear and eat the kernels. Once this has happened, any pest control methods are useless and estimates of yield loss from one larva per ear can cause a 3.7 bu/ac loss (figures based on yield data from US regions).

In beans, the larvae feed on leaves until they are a half-inch long and then move on to eating pods (chewing into them). When not feeding, the insect burrows into the soil.

Yet, the arrival of this new pest has led to a new network consisting of farmers, farm organizations, OMAFRA and the University of Guelph working together to learn as much as they can about the WBC life cycle, feeding behaviours, damage, control methods, timing of controls and more, much of the funding being provided by the Agricultural Adaptation Council programs.

One very successful outcome of this new network has been the WBC Trapping Program. Farmers from all regions of Ontario and into Quebec have set up “milk jug traps” on their operations. Pheromones in the top of the trap attract the moths to the jugs, where they drown in a mixture of antifreeze and water. From June 20 to Sept. 14, each participant tallied the total number of moths captured in their trap site each week, and the data was sent in to the WBC trap network website at www.cornpest.ca. In 2012, WBC continues to be present in regions as far north as the Timiskaming region in Ontario and as far east as the Témiscouata region in Quebec, although fewer moths are trapped in eastern Ontario and Quebec.

After four years of trapping, here are some of the numbers collected through the network.
As shown in Table 1, the number of moths trapped has steadily grown, despite the change in number of traps over the years.

This year, WBC traps were put up two weeks early in Ontario in anticipation of an early emergence of moths considering the warm winter and early spring. As could be expected, the peak date was also one to two weeks early, similar to the growing season where corn and beans were running early.

Determining the first moth caught was more difficult this year due to the presence of a large number or yellow stripped armyworm (YSA) caught in the WBC traps. YSA and WBC share a pheromone component. The first verified WBC moths were caught in Essex county in Week 3 (June 3-9), which coincided with 2010 and 2011.  There is a chance, however, that the first WBC moth may have been earlier and got lost in the large numbers of YSA trapped. The last moth captured was in Week 15 (Sept. 1).

Observations from OMAFRA
Although analysis of the 2012 data has not yet been completed, results as of 2011 indicate that when separated out by crop type, those traps located in sweet corn fields had the highest per trap moth captures during Week 11 of any other host crops with traps. Overall though, dry beans had the highest per trap average for all 14 weeks of trapping combined. See Tables 1 and 2.

The number of moths captured at each trap site does not seem to relate to infestation levels and feeding damage found in the adjacent fields, indicating that other factors are involved in field preference.  In fields where over 100 moths were trapped, scouts were sent to monitor levels of egg masses and larvae.  In the fall, scouts returned to fields where egg masses were found to assess for damage.  In 2011 feeding damage was observed in Chatham-Kent, Lambton, Elgin, Middlesex (primarily in a location where these four counties meet) and Norfolk counties and loss estimates indicated a 3.4 percent yield loss due to WBC feeding damage.  Feeding damage by insects such as WBC can also contribute to pathogen infections, which was seen in relatively high levels in corn in some areas of Ontario in 2011.

Though traps do not seem to indicate which fields are experiencing threshold levels of WBC infestations, they do indicate when peak moth flight occurs and therefore peak egg laying shortly thereafter. Growers should still consider using traps to help indicate the presence of moths in their fields and the appropriate time to scout for WBC eggs.  In addition, it was confirmed that WBC successfully overwintered in 2012 in the Bothwell area. Fields with high trap captures and feeding damage tended to have sandier soil types, indicating that the sandy soil may assist WBC in successfully overwintering.
Observations were made of a high rate of parasitism of WBC eggs through the growing season within some of the infested areas of Bothwell.  This demonstrates that there are natural enemies in the area and there is potential for some additional biological control for WBC.

What’s next?
The trap network will continue through 2013 and will contribute to learning more about this pest, its damage, its spread and control methods. A thank-you is extended to everyone who participated in the 2012 trap network.