Commonly referred to as the hidden yield robber, soybean cyst nematode (SCN) is the most important yield-reducing pathogen throughout Canada and the United States. And yet, growers continue to be surprised each year when this disease is identified in soybean fields across the province. 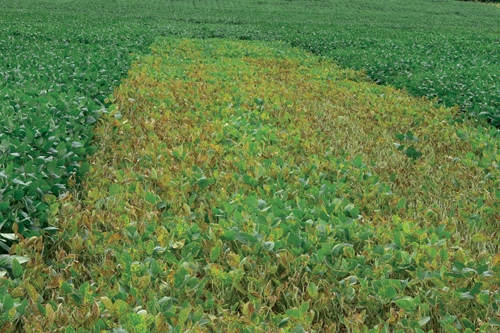 Soybean field affected by SCN. Commonly referred to as the hidden yield robber

The key to controlling this invasive disease is proper field management, something OMAFRA field crop pathologist Albert Tenuta confirmed in a multi-year study spanning Ontario and the north-central United States.

“While SCN is the most yield limiting disease of soybeans in Canada and the US, not all soybean growers are properly managing it,” says Tenuta. A challenging disease to identify because it shows no visible symptoms, SCN is a significant threat, reducing yields by 30 percent or more. And by the time growers notice the diseases’ effect on yields, SCN population numbers are often so high it can take years of proper field management to gain control again, says Tenuta.

Reduced resistance
Resistant soybean varieties, PI 88788 and Peking, are the most commonly used SCN sources of resistance in Ontario. These resistant varieties reduce the reproduction of SCN in fields compared to that of susceptible varieties. But controlling SCN populations is becoming increasingly challenging with the development of  SCN HG Type 1 and 2 populations; these new strains of SCN are able to reproduce on varieties with the PI 88788 (Type 2) and Peking PI 548402 (Type 1) sources of resistance at rates similar to reproduction on susceptible varieties. And SCN Types 1.2 field populations can reproduce on both PI 88788 and Peking. Tenuta reassures growers that the reproduction of SCN HG types (new races) isn’t as high in Ontario when compared to that in US soybean fields, as shown by Tom Welacky’s work with Agriculture and Agri-Food Canada, but they still pose a threat. HG types (Heteroderaglycines, the Latin name for SCN) identify the ability of the SCN population to reproduce on each of the resistant sources. And while the industry eagerly awaits an additional SCN-resistant variety – Hartwig, still in early stages of release – Tenuta recommends growers step up their SCN field management techniques to control existing SCN populations, reduce the development of further SCN HG types and moderate future SCN risks.

Study recommends management strategies
Soybean pathologists, along with research and extension personnel from Ontario – representing OMAFRA and AAFC – and the north-central US states came together in this multi-year study to improve SCN awareness and management. Large on-farm demonstration plots in Ontario and 12 northern US states were established each year using resistant varieties with various SCN resistance genes. The results of this North American study to increase awareness, reduce losses and improve SCN management, confirmed growers who demonstrate active SCN field management can reduce the diseases’ impact and improve their bottom line. Successful management of SCN can not only provide economic benefits through better yields, but also reduce SCN populations and new SCN HG type development, while reducing the overall risk of SCN to a grower.

Study results, in combination with previous findings, led to a checklist of recommended SCN field management tools for soybean growers. “We are re-emphasizing the importance of good field management,” says Tenuta. “The battle against SCN will never end, but at least we can be prepared with the right weapons.”

The collaborated project emphasized the importance of managing SCN to reduce yield-loss potential, the effectiveness of SCN-resistant varieties and available SCN resistance genes, the importance of remaining proactive and developing new SCN sources for the future, and the need for a long-term farm management strategy.

Long-term, active field management of SCN is the only way to stay ahead of the disease. Ontario growers are often surprised when they find SCN in their fields, but the tools and management techniques to control the disease shouldn’t come as a surprise. “We can’t assume SCN isn’t there, we just have to plan for it,” says Tenuta.