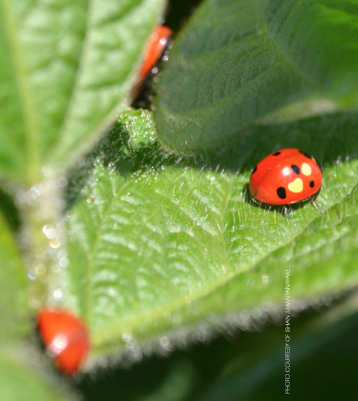 Yellow paint is used to mark the seven-spotted ladybeetle. The paint dots are the code mark that indicates the release point of the ladybeetle. Photo by Ishan Samaranayake.

For all that is known about agricultural pests and their behaviours, vast areas of research are just beginning to scratch the surface of their mysterious lives. But this research is essential for the long-term sustainability of agricultural systems. The motion of insect pests through field crops is a good example: researchers are working to create accurate methods of insect tracking so that the movement of pests can be understood, and beneficial insects can be allowed to cull pest populations in tandem with – or in lieu of – chemical controls.

“We know almost nothing about the distance, frequency, speed and cues that govern natural enemy movements in agroecosystems,” says Alejandro Costamagna, an assistant professor in the department of entomology at the University of Manitoba. “This knowledge is crucial to understand which, when, and how effective natural enemies can be used to control different insect pests.”

Several highly sophisticated insect tracking methods have emerged in recent years, including the use of harmonic radar, which detects specific targets using actual transmitters that are manually attached to larger insects and can be detected via radar receivers. But most of these trackers are still too large for smaller insect pests, like aphids, to carry. Necessarily, insect tracking still requires a lot of legwork.

Costamagna is working on a project tracking the movement of beneficial insects, such as beetles, that consume soybean aphids in soybean fields, as a way of understanding how better to control the aphids themselves.

“Aphids engage in long-range movement, taking advantage of wind currents and landing somehow haphazardly into crop fields, so it is very difficult to anticipate their movements for pest control,” Costamagna explains. “By contrast, natural enemies that in many instances provide effective aphid control have typically directed, short-distance flights that are more likely to be predicted once studied.”

One of Costamagna’s graduate students, Ishan Samaranayake, is currently studying the movement of the seven-spotted ladybeetle, a common beetle in Manitoba fields, as a predator of soybean aphid. Samaranayake used paints to mark more than 1200 ladybeetles that he released in two separate tests in neighbouring soybean and alfalfa fields, to study movement between the two crops, Costamagna says.

“Although recapture rates were low at about five per cent, which is normal in this type of study, we found movement between both crops up to distances of nearly 40 meters and at average speeds of five meters per hour,” he explains. “These results indicate that ladybeetles can move across field boundaries and rapidly colonize infested fields from neighbouring fields.”

Costamagna’s team is also studying the distribution of different fields at large scales in agricultural landscape to begin to determine which crops and habitats act as sources of these beneficial insects in crops.

“Understanding the sources of predators and how predators move across agricultural fields in the landscape is crucial to improve aphid management,” he says.

The difficulties of insect tracking

Insects – especially those that trouble field crops such as soybeans, corn and wheat – tend to be small and very difficult to track. Costamagna says this makes it tough to design tracking methods that can follow individual movements.

“Most systems are labour intensive and expensive, and applicable only to a few species,” he says. Most common are mark-recapture techniques, in which large numbers of insects are marked, released and then recaptured at various distances from the release point, to assess how far and fast they move. “Traditional marking methods include inks, paints and dyes applied individually or as dusts to group of insects,” Costamagna explains.

Indirect marking methods such as these are incredibly inefficient, requiring huge numbers of insects, with only a very small portion of each group recovered for analysis.

In Samaranayake’s study, for example, only five per cent of the ladybeetles marked were recovered after sampling during two consecutive days, for a total of 1918 samples, Costamagna says.

Tracking using harmonic radar is a promising alternative – to date, the technology has been used on both insect pests, such as Colorado potato beetle, and beneficial insects such as bumblebees. Researchers are not sure whether the use of transmitters changes the insects’ natural behaviours, but such technology still offers valuable data about the trajectories of individual insects. From this data, researchers can make inferences about the movements of larger populations.

The creation and maintenance of sustainable agro-ecological systems is contingent on research such as Costamagna’s. Understanding pest movement – and using the data to make accurate forecasts – is a crucial first step to establishing targeted, efficient management strategies.

“Tracking” pest movement differs from “monitoring” pests, and many researchers are engaged in the latter with the goal of improving pest management strategies.

“Depending on how you monitor, monitoring often involves attracting insects to a location by providing them with a stimulus, and then depending on how well developed the monitoring systems is, you can make inferences about how many insects are in the area and how much damage they’ll cause,” says Maya Evenden, associate professor in the department of biological sciences at the University of Alberta. “Tracking involves following their movement naturally, not luring them anywhere.”

Evenden has just begun a projected three-year study (“Development of synthetic food bait traps to monitor multiple cutworm pests and minimize bee by-catch”) in partnership with the Western Grains Research Foundation, the Alberta Crop Industry Development Fund and the Alberta Wheat Commission. The project aims to develop a synthetic food-based monitoring tool for noctuid (cutworm and armyworm complex) pests in the Prairie provinces. Evenden and her team intend to develop a lure that is attractive to both sexes of several cutworm pest species but does not attract significant numbers of bee pollinators.

“Wheat is often damaged by pale western cutworm; canola is damaged by redbacked cutworm,” Evenden says. “They have troughs and valleys of population density, so what would be really useful is to understand when they’re on the upswing. All of a sudden a grower will be affected and they didn’t see it coming.”

Further down the road, Evenden’s project could lead to a monitoring tool that attracts several pest cutworm species so growers can get a handle on the problem before they see plants dying in the field.