Back in 1993, Clarence Swanton with the University of Guelph identified the critical period of weed control in soybeans. He proved that weeds left unchecked during this window of opportunity would become a problem for the crop later in the season, competing for nutrients, moisture and, ultimately, reducing yield. All those years ago, Swanton proved that keeping a soybean crop weed-free for about 25 days after the crop’s emergence could hold “yield loss due to weed pressure” to 2.5 per cent or less.

Swanton’s findings at the time were featured in the 1993 issue of Beans in Canada, a sister publication to Top Crop Manager magazine. In the years since those recommendations were introduced, which have now become the standard weed control recommendation, Swanton and his colleagues and a succession of doctoral candidates have worked to explain how the soybean plant “understands” the threat of weed competition.

Earlier theories suggested the soybean plant was somehow “weaker” and that weeds being the stronger plants would outperform the crop. It was also considered that stronger weeds required more nutrients and moisture, and would rob them from the soybean plants causing yield loss. While all the theories are true in a sense, Swanton says his latest research actually provides “the science behind the recommendations we made years ago on the timing of weed control.” He adds he can now explain why the weeds can outperform soybeans, and it all has to do with communication.

“This current research makes us think differently about weed competition,” Swanton explains. “It shows how yield loss is affected in the plant and how yield loss is accomplished in the plant.” It turns out weeds and soybeans are actually communicating with each other. When faced with competition from weeds, the soybean plant will actually reduce its claim to nutrients and moisture, in effect backing away from the schoolyard bully.

The research focused on the red to far-red ratio in the light spectrum that is reflected off the soybean leaf surfaces. Essentially, when the soybean plant detects another plant reflecting far-red light back to it, it begins to prepare itself for survival by becoming taller and thinner to “out-compete” the threat. Naturally, as the soybean plant struggles to survive, seed production is reduced and, hence, yield will be as well.

“This work suggests this is less about plant competition and more about detecting or sensing a change in the environment,” Swanton explains. “The soybean is changing to improve its own fitness and, as it does this, yield is reduced.”

According to this latest research on how weed competition affects yield, the reflected light from the red spectrum causes a delay in the development of the root system, which will affect the plant’s ability to produce yield. But, it isn’t just lack of light, it’s specifically an issue with the reflected far-red light that causes the plant to change. The low red to far-red light reflected from weeds reduced the soybean’s total root biomass by 36 per cent.

“The research reinforces the importance of early weed control,” Swanton says. “We have just proven the rationale behind this advice.” But, the research did not stop at just proving how weeds reduce yield, it also looked at how weed competition affected nodulation in the soybean plant. The researchers learned that a soybean plant will reduce nodulation when faced with weed competition, giving growers another reason to ensure weed control is done early and effectively. The levels and effect of stress on soybean plants was also measured as part of the research and, not surprisingly, they proved that stressed plants had elevated levels of hydrogen peroxide, a compound plants produce when under stress. 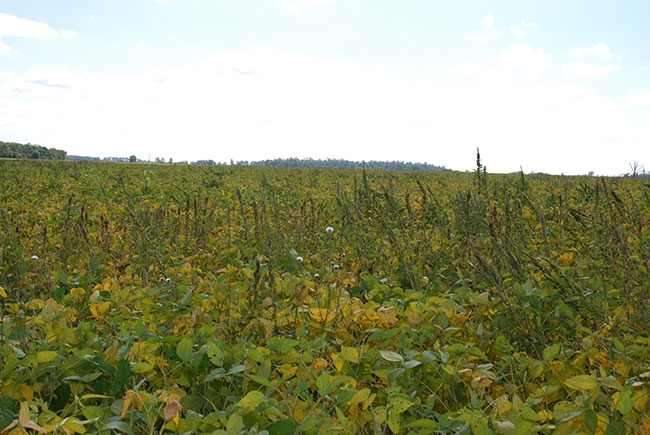 When faced with competition from weeds Back in 1993