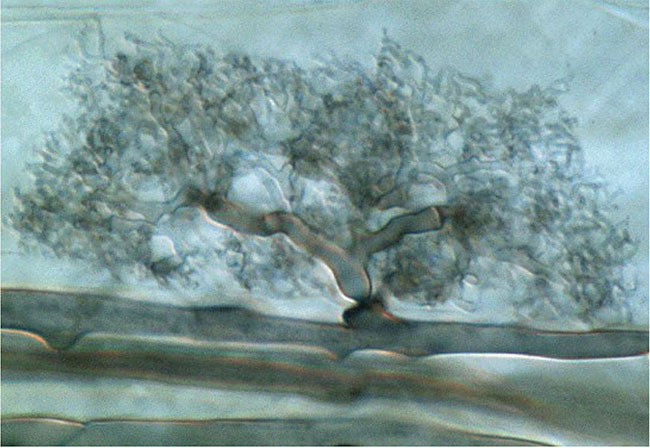 Can crops gossip? Results of research on arbuscular mycorrhizal fungi show that some plants communicate through mycorrhizas.

“One of the interesting findings on mycorrhizas is that they can link two plants together. Research on fababeans found that, when aphids attacked one plant, there was linked communication between plants within the mycorrhizae network telling the other plants to increase defense mechanisms,” says Monika Gorzelak, a soil fertility specialist with Agriculture and Agri-Food Canada (AAFC) in Lethbridge, Alta.

Arbuscular mycorrhizae are unique symbiotic root-fungi that mainly improve plant nutrient uptake. In crops that support mycorrhizal root growth, the mycorrhizae grow between the cell walls of the outer layers of the root to reach the xylem, where nutrients are transported upwards to the plant. Cereals, flax and legumes are host plants for mycorrhizae and are highly dependent on them, but crops such as canola and mustard are non-mycorrhizal.

Gorzelak says commercial mycorrhizal inoculants have been developed to try to help improve the colonization of the fungi on plant roots.

“Lots of research shows huge benefits to inoculation in the greenhouse, but unfortunately it can’t be replicated in the field,” Gorzelak says. “A meta analysis shows these inoculants only work 50 per cent of the time in the field.”

Part of the reason that an inoculant doesn’t work is because it can’t adapt to the local environment when placed in the soil, Gorzelak says. The nuclei of the fungi in the inoculant are usually all the same, so there is no diversity or ability to adapt to the environment. Even if there are two nuclei types in the fungi inoculant, if they don’t recombine (similar to cross-breeding), then genetic diversity is still very limited. What is required is a mycorrhizal inoculant with several nuclei types that recombine as they grow to produce a genetically diverse network that can survive and effectively function as nutrient transporters.

“We are starting a bio-prospecting project in 2020 to go out and look for recombining fungi. The intent is to be able to build a better inoculant that will help improve the mycorrhizal network,” Gorzelak says. 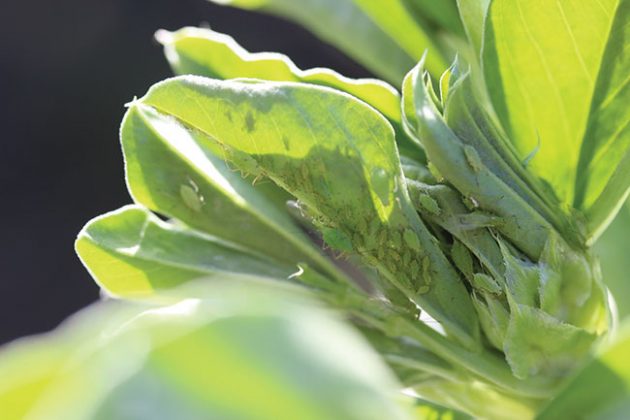 Research on fababeans found that, when aphids attacked one plant, there was linked communication between plants within the mycorrhizae network telling the other plants to increase defense mechanisms. Photo courtesy of Tyler Wist.

In the meantime
Gorzelak says farmers can implement management practices to help encourage native mycorrhizal fungi. The first is to keep living roots in the ground longer. Practices like continuous cropping, growing perennials and using cover crops can help.

No-till or reduced till can also help maintain the integrity of the mycorrhizal network.

“Keep native grasses wherever possible. These sites have large genetic diversity, and are important sources for bio-prospecting,” Gorzelak says.