A long-term approach is required to address unique needs. 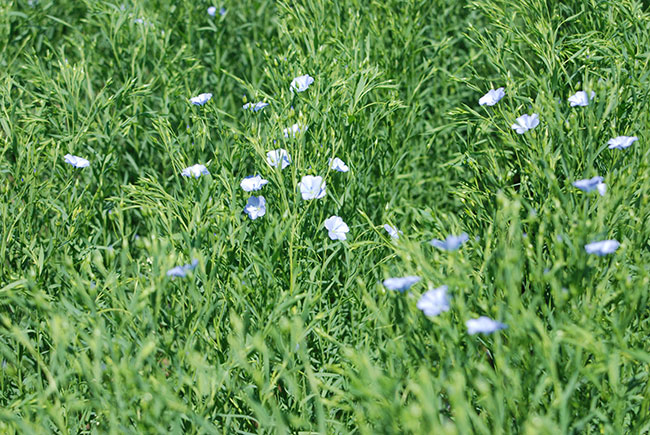 Flax isn’t just another crop. It has unique phosphorus (P) nutritional needs that include a greater dependence on soil P and mycorrhizae fungi. As a result, P management in flax requires a long-term approach.

“Flax requires some extra attention when it comes to phosphorus management,” says Ramona Mohr, research scientist with Agriculture and Agri-Food Canada in Brandon, Man. “Phosphorus plays some key roles in plant growth including early root and shoot growth, earlier maturity, and improved efficiency of other nutrients such as nitrogen.”

A key difference for flax compared to other crops is that P uptake in flax is greater from soil P than fertilizer P. Research showed that while rapeseed derived similar amounts of P from soil and fertilizer P, flax derived up to three times more P from the soil than from fertilizer P.

“Flax relies more on the bulk soil for P uptake than the fertilizer band,” Mohr says.

Flax is also sensitive to seed-placed P fertilizer. Guidelines have been established in Manitoba not to exceed 20 lbs. P2O5 per acre as seed-placed monoammonium phosphate based on disc or knife openers with a one inch spread and six to seven-inch row spacing and good to excellent soil moisture. Saskatchewan’s guidelines are based on knife openers with a one-inch spread, nine-inch row spacing and good to excellent moisture conditions, and the actual amount of P2O5 should not exceed 15 pounds per acre.

“Based on the research, banding fertilizer P near the seed-row is a good management option,” Mohr says. “Banding avoids seedling damage from seed-placed P, but is still near the developing roots early in the growing season.” 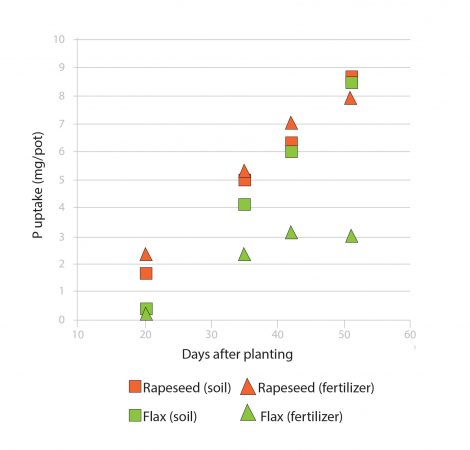 P uptake by flax and rapeseed from soil versus fertilizer band. Source: Kalra and Soper, 1968.

A 2016 study by Minghu Li at the University of Saskatchewan found high levels of mycorrhizae fungi colonizing flax roots in most of the 18 commercial flax fields surveyed. The fungi were also affected by factors including field management and soil characteristics.

In Li’s study, no-till commercial flax fields had a greater abundance and species richness in AMF communities than conventional tilled fields. Tillage can disturb the fungal networks, reduce spore density, and alter the AMF species left from the previous crop. In another Manitoba trial from the early 2000s by AAFC researcher Marcia Monreal, tillage had no effect on AMF colonization of flax, but early colonization of flax was higher after wheat than canola.

An important implication of crop rotation on mycorrhizae colonization on flax is that canola is not a host for mycorrhizae fungi. The importance of mycorrhizae can be seen in research in Manitoba by AAFC researcher Cynthia Grant in the early 2000s. Flax following wheat had increased early-season P uptake at all six site-years compare to canola stubble, and higher flax yield occurred on wheat stubble than canola stubble. Net revenue was also consistently higher for flax after wheat than canola. 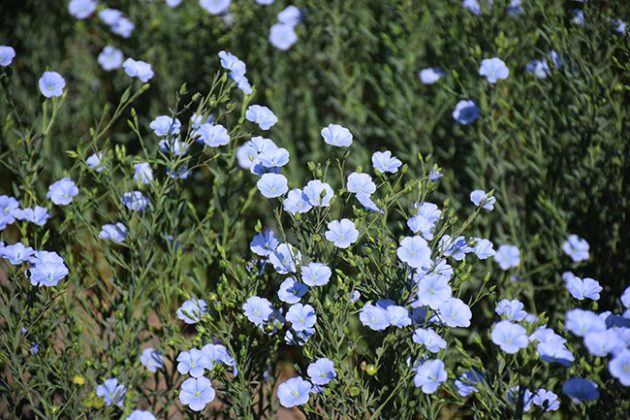 More recent research by Chris Holzapfel at the Indian Head Applied Research Foundation found modest yield responses to moderate rates of side-banded P. The research looked at four nitrogen (N) rates and four P fertilizer rates over three years at eight locations in Western Canada starting in 2016. Phosphorus rate did not have a noticeable effect on flax maturity. Flax yields were increased with both N and P fertilizer.

Averaged across sites, Holzapfel found that yields continued to increase right up to the highest rate of 60 kg P2O5/ha, but only with an average yield increase of seven per cent at the 60 kg P2O5/ha rate. Despite the linear response to P, the researchers felt that more modest rates of 20 to 40 kg P2O5/ha would likely be enough to prevent significant yield loss but still maintain soil fertility.

Mohr says that based on the research conducted over the years, a number of conclusions can help guide P management in flax. Given that early season P availability is critical to optimize yield, management practices should aim to supply adequate P early in the growing season. This can be accomplished in a number of ways.

Band fertilizer P close to the seedrow to ensure early access to the roots, and to minimize P tie-up in the soil. Flax is also more reliant on soil P than some other crops, so soils with a higher soil test P level are better suited to flax production. And since flax benefits from mycorrhizal fungi, flax should be grown after crops that support mycorrhizal crops – not canola – and under reduced tillage systems.