First identified in Ontario in 2000, the swede midge has spread its wings to parts of the rest of Canada and into the northeast United States. As a cruciferous feeder, it has likely caused economic loss in Ontario crops as far back as 1996.

The adult flies were first observed in Saskatchewan in 2007 and Manitoba in 2008. Last year (2012) was another milestone year, with the first economic damage seen in canola fields in northeast Saskatchewan.

“We are in the discovery phase on the Prairies. It has the potential to be a significant pest, and is in Ontario, but we don’t know how the biology of the pest will pan out here,” says Julie Soroka, research scientist, entomology, with Agriculture and Agri-Food Canada’s Saskatoon Research Centre. “Farmers and agronomists should be aware of the pest, and be familiar with the damage symptoms it causes.”

The swede midge is native to Eurasia, and belongs to the fly family Cecidomyiidae, as does the wheat midge. The swede midge feeds only on crucifer plants.

Swede midge may have been in Saskatchewan even earlier, with suspected larval specimens collected west of Nipawin in 2003, although the specimens weren’t positively identified. While the swede midge was a regulated, quarantined pest in Canada, in 2002 the Canadian Food Inspection Agency (CFIA) initiated a monitoring program and implemented measures to prevent the entry and spread of swede midge from infested areas to non-infested areas of Canada and the US. The CFIA program caught small numbers of adult swede midge in pheromone traps in the Nipawin, Melfort and Yorkton areas in 2007 and 2008, although no crop damage was evident. CFIA field surveys also found swede midge in Manitoba in 2008, as well as in Prince Edward Island and Nova Scotia.

After 2008, the CFIA and the United States Department of Agriculture (USDA) reviewed the regulated pest status, and because the midge and already “flown the coop” to many areas of Canada and the northeast US, the regulated quarantine status was dropped, as was the monitoring program.

After CFIA stopped its monitoring program, swede midge remained on the radar screen for entomologists on the Prairies.

In 2012, Soroka carried out a survey around the Nipawin, Melfort and Tisdale areas, while Saskatchewan’s Ministry of Agriculture (SMA) surveyed canola fields in the Yorkton/Melville area. Larvae were found in eight fields around Nipawin and three fields south of Tisdale. Damage symptoms were found in three fields south of Tisdale. Prior to 2012, no symptoms of swede midge damage had been recorded in Saskatchewan.

Damage symptoms
The actual swede midge adult fly is difficult to detect and is similar in size to the wheat midge. The swede midge is a tiny, light-brown fly about 1.5 to two millimetres long, with very hairy wings. The insect overwinters in the larval stage in cocoons in the soil and adults emerge during May-June. The females lay eggs on the youngest parts of the plant such as flower buds or the base of leaf stalks. The larvae hatch within a few days and feed mainly near the growing point. In two to three weeks, the fully grown larvae are about two millimetres long. They drop to the ground, pupate in the soil and the next generation emerges as adult flies two weeks later. In Europe, there are four overlapping generations, while Ontario has at least three generations.

“There may be two generations on the Prairies. It is unlikely that we would see three to four generations here, but we need to keep monitoring so we can find out more,” says Scott Hartley, provincial entomologist with SMA.

Damage to canola and other cruciferous crops is caused by larvae feeding on the plant. In Ontario, symptoms of damage associated with swede midge depend on the growth stage of canola. In younger plants, young shoots and leaf stalks may be swollen, distorted and twisted, resulting in the death of the main shoot or in the development of secondary shoots.

The growing point may become necrotic and bolting might not occur. Damage to a bolting stem may cause a “palm tree” effect, with a shortened raceme crowned with a bouquet of pods radiating out from one point rather than along a typical raceme. After full flowering, swede midge has not been found to impact canola yields.

Soroka says that in northeast Saskatchewan in 2012, the racemes appeared normal except that some flowers had fused petals that did not open. When dissected, the flowers contained small larvae, with up to 14 found in one flower. Small, misshapen or missing pods occasionally were found below the infested flowers.

When scouting, farmers and agronomist can also look for the tiny, yellowish, jumping larvae.

The reason for the 2012 outbreak in Saskatchewan is unclear. The swede midge likes moist soil conditions, and certainly the last few years in northeast Saskatchewan have included wet weather. In addition, mild winter weather may have allowed better over-winter survival of the swede midge.

“This was the first year we saw economic damage in canola,” says Hartley.  “We’re not sure why there was damage this year when the pest has been here for at least five years.”

Could this be the next big insect pest to cause economic damage on the Prairies? No natural predators have been found.

Climex modelling by AAFC research scientist Owen Olfert shows the swede midge could potentially expand across many areas of the Prairies, but there are many unknowns. The adult fly is a very weak flier, so expansion may be slow. A lot depends on the weather.

Soroka cites another previous pest – the Russian wheat aphid – that was a potential threat back in the late 1980s. It, too, had the potential to cause economic damage on the Prairies, but the populations didn’t survive.

“Nature is very plastic. The swede midge might be able to adapt, or another insect might learn to feed on it,” says Soroka. “At this point, we don’t know, so we’ll just have to continue to monitor and see how it develops.”

Farmers or agronomists who find suspected crop damage or swede midge larvae should contact their provincial entomologists to help track the spread of the pest. 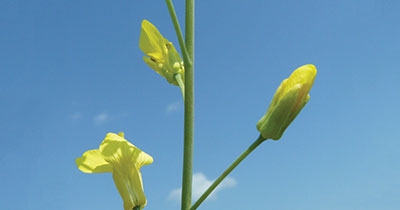 Flower petals “glued” together First identified in Ontario in 2000