Swede midge was first identified in Saskatchewan in 2007, but, so far, populations are small and scattered. However, it is a serious pest of canola and cruciferous vegetable crops in Ontario. First identified in vegetable crops in 2000, damage to canola crops was not reported until 2003. Since then, swede midge populations have been spreading and increasing across Ontario, with 2011 one of the worst years for damage for canola growers across much of the canola growing area.

“In Ontario, years where crops are planted later because of wet weather usually result in worse swede midge damage than early planting,” says Rebecca Hallett, professor and associate director, School of Environmental Sciences at the University of Guelph. “In 2011, swede midge erupted as a serious problem in both southern and northern areas of Ontario, and currently swede midge damage can be found on most canola plants in the northern region.”

In Ontario, swede midge adults typically begin emergence in mid to late May, with the peak occurring in early June. Swede midge overwinter as larvae in the soil of infested fields. “In the spring in Ontario, there are two distinct peaks of emergence of overwintered adults: the early emergers in late May to early June, and the late emergers about one to two weeks later,” explains Hallett. “With four generations of each of these populations occurring each year, the generations overlap with each other so every stage is often present in the field at the same time. Female swede midge like to lay their eggs at the base of leaves around the young, rapidly growing meristematic tissues, so this is the most important stage to protect.”

On the Prairies, swede midge has not caused economic damage. In 2003, Julie Soroka, research scientist with Agriculture and Agri-Food Canada (AAFC) in Saskatoon, Sask., began monitoring for swede midge in that province, and through to 2011 never discovered any populations. However, in 2012, growers in the Nipawin and Carrot River area reported the first field damage from swede midge.

“Growers started noticing malformed flowers, and on further inspection, the swede midge larvae were identified in canola,” says Soroka. “This was the first time swede midge damage in the field was seen in Saskatchewan. The damage was seen late in July, indicating the adults didn’t emerge until the beginning of July or shortly after. We conducted a survey of 44 fields in a 125-kilometre radius of that site, and found 11 fields with minor infestation and only one field with about one acre that showed readily noticeable damage. The damage was not of economic significance in any of the fields.”

In 2013, damage was identified earlier at the beginning of July, and in a greater concentration. Soroka notes that although the damage was easily found in many fields, damage was generally low. “We did a mapping survey in 2013 that showed the population had spread west and south to about 200 kilometres away from the Nipawin-Carrot River area, as well as set up pheromone traps in 22 locations throughout the summer.”

Only a few midge were reported in the traps, and although infested flowers were readily found in many fields throughout the northeastern region, Soroka suspects the midge is at a much lower population density than in Ontario and is likely cycling through only two or three generations per year as compared to four or five in the east.

In 2014, swede midge was first detected late in the season, as in 2012, and very little damage was reported, although the area of damage is slowly extending. Both pheromone trapping for adults and examination of infested canola found swede midge present in the region near North Battleford, suggesting this area is another site of introduction. In Manitoba, swede midge was identified in 2008 and again in 2013 but in very small numbers. In 2014 it was found at several sites south of Highway 1, as well as in the Dauphin-Swan River region. To date, swede midge has not been observed in Alberta.

Soroka received funding in 2014 for swede midge research with a focus on understanding differences in the biology, overwintering, challenges with pheromone trapping and other conditions that may be different from Ontario. Growth stage experiments are also underway with both early and late crops to determine the expression of damage at the various stages. Computer modelling has shown that all canola-growing areas in Canada are potentially suited to the pest.

Management strategies for control
In Ontario, canola growers should use a combination of management practices including crop rotation, planting early, monitoring and insecticides for control of swede midge. Swede midge is a crucifer specialist and a difficult pest to control, so crop rotation is very important. “Although it can be difficult for growers to rotate on a large enough scale to be very effective on a regional scale, it is still really important for fields to be rotated to keep individual field populations down,” explains Hallett.

“Without proper rotation, populations can build up in fields to levels where pesticides may not be able to reduce economic impacts. About five to 10 per cent of the swede midge population will stay in the soil and overwinter for up to two years. Therefore, a three-year crop rotation away from canola on given fields is very important.”

Planting canola as early as possible so that it is well established before midge emergence helps prevent damage by swede midge, since females prefer to lay their eggs in the early vegetative and bud stage before bolting.

“We are still working on identifying critical stages and swede midge numbers for developing action thresholds for insecticide application,” says Hallett. “We are targeting various stages including the vegetative rosette stage, the very early bud stage and secondary bud formation stage, and then conducting spray trials in either single or combinations of those timing to find something that will be the most effective and economical for growers.”

Pheromone traps that attract male swede midge are used to develop thresholds. For broccoli and cabbage crops, the action threshold is five males per pheromone trap per day. “We are still working on the levels for canola, but for now it looks like a similar level will be an important threshold in canola,” says Hallett. “We recommend growers set up four pheromone traps around each field and check two or three times a week. When checking traps, add up all of the midges, divide by the number of traps and number of days since last counted for a threshold count.”

Swede midge requires intensive field-specific monitoring, more than for most other pests. The timing of peaks in terms of swede midge emergence is a little different in every field, and populations can vary a lot within a field as well as between fields. Therefore, it is not possible to estimate populations based on other nearby fields. Hallett emphasizes there likely isn’t any other pest in canola that has to be managed that intensively or is more challenging across huge acres like swede midge.

There are currently two insecticides from different chemical families registered for use on swede midge in canola. Matador is a synthetic pyrethroid, which is effective on both larvae and adult swede midge. Coragen is in Group 28, a new class of pesticides known as diamides with a translaminer effect, which means that although it is not a true systemic, it can slowly move into the leaves and tissue it is applied to. Coragen is effective against larvae.

“In our various field trials, both products have been equally effective,” says Hallett. “Both Matador and Coragen are limited to three applications per season. Growers also need to be aware that if they have used the new Lumiderm insecticide seed treatment for flea beetles, also a Group 28 insecticide, then they cannot use Coragen for swede midge control in the same field in the same year.”

For Prairie canola growers, swede midge has not yet been found at populations that cause economic impacts. “Growers need to be aware of the situation and monitor in areas where swede midge has been found,” says Soroka. “A positive sighting of swede midge is when you can find larvae in the plant.”

There are several symptoms that can be similar to problems caused by other conditions such as heat, nutrient deficiency and other insect pests such as lygus bugs. For example, in 2014, over much of the province, canola plants developed palm topping or truncated ends that resembled swede midge damage but in most cases were not.

For now, Soroka recommends that growers in Saskatchewan should monitor for swede midge and consider using a three-year crop rotation in the areas where it has been identified to reduce the risk of swede midge on the Prairies. “It is the first emergence of the first generation that causes the most damage, so we need to determine what triggers emergence from overwintering, and how our temperatures and growing conditions may impact the lifecycle of the pest on the Prairies,” she adds. “We have also discovered a parasitic wasp that may offer some biological control options, which so far have not been found in Canada.” 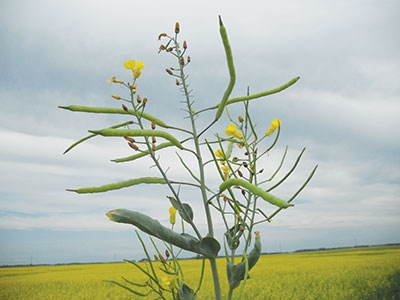