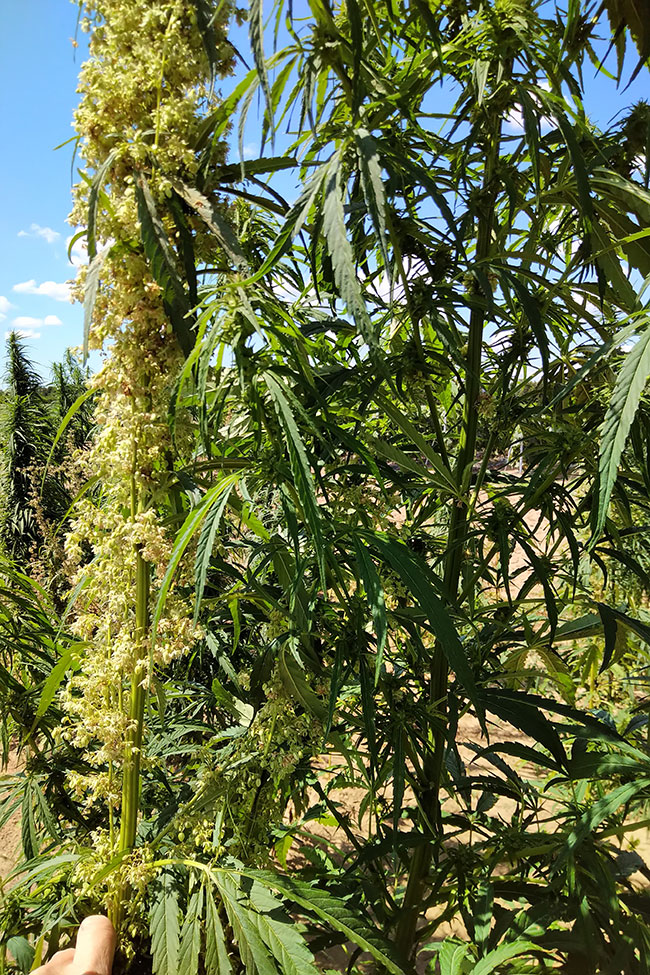 Hemp can be grown for seed stock or CBD. Photos courtesy of Jim Todd.

According to Jim Todd, industrial crop specialist for the Ontario Ministry of Agriculture, Food and Rural Affairs (OMAFRA), there are lots of reasons why industrial specialty crops can be a good option for Ontario field crop producers. Specialty crops could be a source of new or additional revenue, while breaking up pest cycles on the farm.

But there’s also a big reason why many producers avoid them: the lack of processing capacity in the province.

“There are always people who want to buy the crop, but if you can’t get it processed, there’s no value,” he says. “Demand and markets have to develop in lockstep.”

Market demand and processing capacity for specialty crops are improving in Eastern Canada, albeit slowly. In the meantime, Todd’s team is working out the agronomics for crops like cannabis and hemp, camelina, feedstock plants for biogas such as cup plant, and biomass crops like switchgrass and miscanthus.

Cannabinoids
Much of Todd’s work over the last two years has been focused on cannabis and industrial hemp for CBD, and is done in close collaboration with Rene Van Acker and Rachel Riddle from the University of Guelph.

That’s not to say growing hemp is a walk in the park.

“There are a lot of regulatory challenges for hemp,” Todd says. “If you want to grow hemp for CBD, you want to grow the varieties that produce the highest levels of CBD, from plants that are females. But if CBD levels are raised, you risk bringing THC levels above a certain percentage, which causes problems.” Health Canada stipulates that all industrial hemp, even if grown for CBD, must have THC levels below 0.3 per cent.

This isn’t the grower’s problem, Todd is quick to point out – seed producers are required to certify THC levels are 0.3 per cent or lower. But it can become complicated for farmers if the licensed processors buying the crop ask them to have the crop analyzed.

Hemp can also be grown as a seed crop, which is simpler, Todd says. At harvest, the combine requires special settings, and the fibre can be a challenge; one method is to raise the head and take the tops off, leaving the stalks to be baled or plowed down.

Growers interested in cannabis as a field crop for CBD production should be aware that the crop can only be sold to a licensed cannabis processor. “Having contracts with licensed processors before sowing the crop would be in the grower’s best interest,” he says.

Markets aside, some agronomic questions for growing industrial hemp or cannabis still need to be worked out in the province.

Todd’s team is looking at the impact of pollination on CBD yields from female flowers. The current practice, he says, is to plant just female plants to avoid running the risk that plants will be pollinated, which may reduce CDB yield. But Todd says research is still needed to establish that yields are meaningfully affected by pollination. 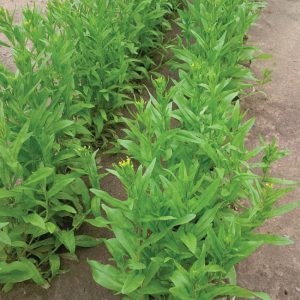 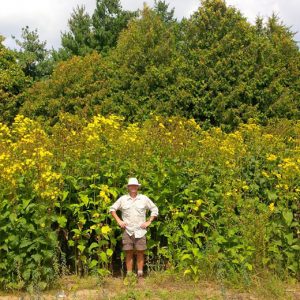 Cup plant can be used as a feedstock for anaerobic digesters.

Camelina
Todd has also been working with Linnaeus Plant Sciences and the University of Guelph on camelina, an industrial oilseed and relative of canola.

Camelina oil is highly valued for the consumer market, while camelina seed meal is approved for use as a feed ingredient for broiler and layer hens and farmed salmon and trout.

In a recent study, Todd’s team looked at the potential for double-cropping camelina with soybeans, with soybeans seeded into fall-seeded winter camelina. This system allows for winter cover for bare fields, and potentially higher net profits from the combined yields of the camelina and bean crops.

The project failed to take off, Todd says, due to low seed vigour in the camelina crop in the first two years. But in the third and final year, when new seed was planted, the crop established well.

“I see camelina as a valuable replacement or supplement to canola, because it’s more resistant to swede midge,” Todd says. “But again, in Ontario the lack of crushing capacity for camelina means you have to find a niche specialty crusher to do it.”

Biomass crops
Todd is also working on cup plant, a feedstock for anaerobic digesters, as well as perennial grasses such as switchgrass and miscanthus, which are grown for a variety of industrial uses. The latter are the particular focus of his colleague, Mahendra Thimmanagari, bioproducts specialist for OMAFRA.

Thimmanagari says miscanthus and switchgrass are the most common biomass crops in Ontario; both have high yield potential and, once established, can remain productive for 10 to 15 years. The crops are grown on around 2,500 acres in southwestern and eastern Ontario.

In collaboration with University of Guelph associate professor Naresh Thevathasan, Thimmanagari is researching biofertilizer effects on switchgrass crop yields, as well as these crops’ potential for soil carbon sequestration.

Both crops can be grown on marginal land, Todd says, such as riparian strips or other corners of the farm where it can be tricky to grow a field crop – although they predictably do better on prime land. And both crops have “tremendously deep root systems,” Todd says – easily six- to 12-feet deep in the soil – meaning they could help draw excess nutrients from runoff.

Cup plant, a native perennial and member of the aster family, is used as a feedstock for anaerobic digesters.

“One of the challenges with the digester is having a regular supply of feedstock. Cup plant could be a good alternative to corn silage,” he says.

For the last three years, together with Brandon Gilroyed at the University of Guelph’s Ridgetown campus, Todd has been working on field agronomics for cup plant, such as germination rates and response to nitrogen, as well as variety trials.