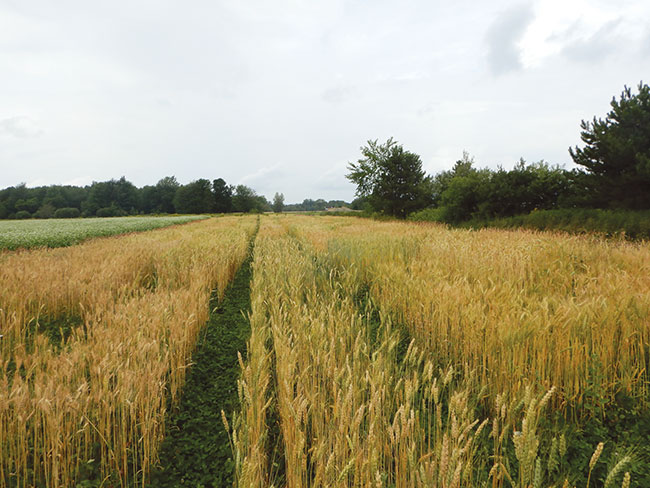 ABOVE: A project in Quebec is comparing different bread wheat variety mixtures to find ones that provide clear benefits to growers and end-users. Photo courtesy of CETAB+

A bread wheat research project in Quebec is aiming to capture the resiliency that comes with the genetic diversity in old-time crops while maintaining the advantages of today’s elite varieties.

Plant geneticist André Comeau explains that the development of genetically uniform wheat varieties in Canada was initially driven by the need for uniform crop maturity. “Ancient farming was never done with pure varieties; farmers grew landraces, selected over millennia. Bread wheat is a species that comes from the Middle East, and uniform ripening is never a problem in that region because the temperatures get so high,” he says.

“But bread wheat was very poorly adapted to northern climates like Canada when people first tried to grow the crop here. In Western Canada especially, in one year out of four, the crop froze to death before it was ripe. The key in Canada was to use pure varieties with uniform maturity to obtain a harvest of acceptable quality.

“Yet many possible advantages were lost through the move to pure varieties – more stable quality, better resistance to diseases and insect pests, better resistance to drought and excessive rain, and more stable and better yield,” notes Comeau, who is the project’s consultant due to his knowledge of spring wheat varieties, gained during his 42 years as a research scientist with Agriculture and Agri-Food Canada (AAFC).

The potential advantages of increased genetic diversity motivated European research on mixing crop varieties together in a field. And the research findings from Europe have sparked interest in trying this approach in eastern Canadian bread wheat production.

“The idea for this project came not from growers but from end-users. Les Moulins de Soulanges and La Milanaise [two Quebec-based companies that produce flour] would like to have more stability of quality, which could come from mixtures. But they would also like farmers to gain from growing mixtures,” he explains.

“If you mix a very high quality wheat with a somewhat lower quality wheat that has very high yields, then flour and breadmaking companies would be able to get good quality grain at a better price. And if you’re mixing varieties for more stable quality, then the varieties could also be complementary in other ways. For instance, studies in France show that if you mix varieties that differ in their disease resistance traits, you can get as much as a five-per-cent yield increase compared to the average yield of the pure varieties.” Comeau suggests there might be other improvements, such as extra yield gained from mixtures with different, non-competing root structures.

The project’s goal is to identify bread wheat variety mixtures that consistently perform well under organic wheat production in Eastern Canada. Organic growers may be especially interested in the potential of mixtures to provide better control of diseases, insect pests and weeds. However, Comeau believes these benefits and other possible improvements in sustainability and resiliency could be of interest to conventional wheat growers, too.

Funding for this project is from the Organic Science Cluster 3 (OSC 3) and La Milanaise and Les Moulins de Soulanges. OSC 3 is a research initiative supported by the Organic Federation of Canada and AAFC’s Canadian Agricultural Partnership.

Julie Anne Wilkinson with CETAB+ (Centre d’expertise et de transfert en agriculture biologique et de proximité) is managing the project, and CETAB+ is carrying out the field work. Les Moulins de Soulanges and La Milanaise are analyzing the quality of the harvested grain for the project.

Seeking suitable mixtures
This five-year project, started in 2018, includes at 12 spring wheat varieties: either bread wheats or wheats that could be used in bread mixtures. Ten of the varieties are eastern Canadian and two are western Canadian.

Most of the 12 are commercially available varieties, although a few are advanced lines close to registration. Comeau says, “We want to be ahead of the game, so if an advanced line looks like it would be a very good component for a mixture and we are confident that it is going to get registered, we have entered it.” One of those lines was recently registered. This new variety, AAC Maurice, was developed under a former AAFC breeding program in Quebec, led by Comeau and his assistant François Langevin, which bred bread wheats for Fusarium head blight resistance.

With 12 varieties, many different combinations are possible. Since this project is a first look at how well the mixture concept works for organic wheat production in Eastern Canada, the project team has decided to focus on mixtures of two varieties. However, Comeau notes that the trend in Europe has been to use more diverse variety mixtures.

The number of field sites in the project varies slightly from year to year. In 2020, there were two sites, one in Victoriaville and one near Sorel. Each year, the plots compare about 15 pairings and about 12 pure varieties, with three replicates of each.

To choose specific pairings, the team identifies varieties that might work well together based on what is known about the individual varieties. “The number one factor is days to maturity. In Canada there could be 15-days’ difference in maturity between varieties in some years. You cannot make a crop mixture in which half of the wheat heads would be ripening in the middle of August and half in early September,” Comeau explains.

“Disease responses, quality aspects, yield, lodging and root traits are also important in the invention of a good mixture. Moreover, one cannot mix a short wheat with a tall one. So, it is quite complex when one tries to make combinations that would generate enthusiasm from both farmers and end-users.”

So far, the team has analyzed the data from 2018 and 2019, and they will be analyzing the 2020 data in the coming months. “There are always some mixtures that look good every year. If they look good, we try them again,” Comeau says. “We need to find mixtures that are good year after year.”

After a couple of dry years at the field sites, the team is hoping for some wet conditions in the next two seasons to provide data under a wider range of growing conditions.

If this project shows that some wheat mixtures could provide a clear benefit to eastern Canadian growers and end-users, then studies could look into ways to make the use of mixtures easy and inexpensive for growers.

Comeau adds, “Out of this project, we are learning more about the varieties – not only how well they complement each other, but also how well they do on their own.”

“This year was pretty hot in the early part of the season, and we found that one or two of the varieties have root systems that are able to keep going in hot, dry conditions and grow faster than the others. Also, a few of the varieties are especially good at competing against weeds, which is very useful, especially in organic production systems,” he says.

“I think we are learning a lot and we have a lot more to learn.”