The 2012 growing season was kind to soybean growers in Manitoba and Saskatchewan.  A hotter than normal summer piled on the heat units, which resulted in good yields and earlier maturity than normal. But the lower moisture did cut into yields in some areas.

“We were seeing soybean yields in the 25-bushel-per-acre range, with some areas in the 30-plus range. By comparison, canola was yielding in the high teens to low 20s per bushel range, so there is a lot of interest in soybeans for next year,” says Kevin Elmy of Friendly Acres Seed Farm at Saltcoats, Saskatchewan.

Seeded acreage estimates vary considerably for Saskatchewan, as not all seeded soybean acres are insured.

“You don’t make any money on canola with 20-bushels-per-acre yield, so there is a movement to get soybeans into the rotation,” explains Elmy.

In some instances, soybean is replacing canola in the rotation, but soybeans are also being included in a longer rotation. For example, the tight canola-wheat rotations are being loosened up a bit to include soybeans, or a three- to four-year crop rotation is being extended into a four- to five-year rotation with soybeans.

CHU versus daylight sensitive
One possibility that has Elmy concerned for 2013 is if growing conditions return to more normal temperatures. He has been tracking crop heat units (CHU) back for the last eight years and, in his region, this year had 350 more CHU than normal.

He notes that some of the variety ratings are based on CHU in other soybean-growing areas, and when moved into Saskatchewan or Manitoba, they may not perform the same. Even if two varieties are rated at 2325 CHU, one might respond to longer daylight hours more favourably, and mature earlier, than the other one.

Rather than focus solely on CHU ratings for soybeans, Elmy assesses how a variety will respond to the longer daylight hours as a variety moves farther north. Soybeans flower in response to the length of day. When the days become shorter after June 21, day-length-sensitive soybeans are triggered into flowering. A southern variety moved north might delay flowering until the day length shortens to the same length as in the south where it was developed. This could mean the variety matures too late, even if it has a lower CHU. Conversely, another variety may not be as sensitive to day length, and it would flower, set seed and mature earlier.

“As you move west and north from the traditional growing areas, the altitude is higher and the temperature is cooler,” notes Elmy. “The variety needs to be assessed in the area where it is grown.”

Another clue for Elmy is to look at the Manitoba Crop Variety Evaluation Team (MCVET) trials and assess the performance as the variety moves north and west in the trials. This allows him to assess relative performance, how the variety responds to longer daylight hours and maturity.

“The best way to assess performance is to grow the varieties side by side in several locations to see how they mature,” he explains.

Variety development moving ahead in Saskatchewan
In addition to private companies investing in soybean research in Manitoba and Saskatchewan, the University of Saskatchewan is also evaluating short-season soybean germplasm for adaptation in Saskatchewan. Soybean is a warm-season legume that prefers warm and wet conditions. Cool nights are a disadvantage.

Despite the challenges, soybeans remain a crop of growing interest because of their tolerance to wet soils, nitrogen-fixing capability, lower costs of production, and few disease and insect problems. With the development of Roundup Ready varieties, weed control is also simple and proven. Marketing is commonly done through grain brokers and buyers throughout Manitoba and Saskatchewan. 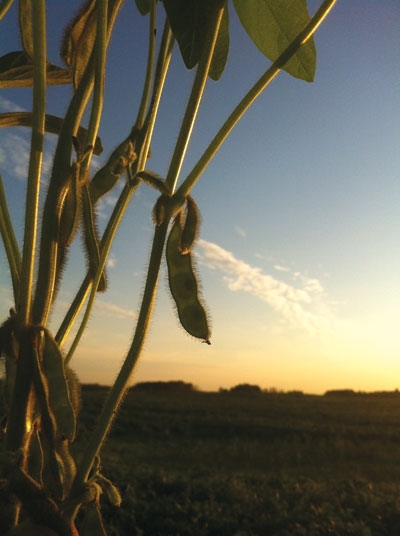 Soybeans performed well in 2012. The 2012 growing season was kind to soybean growers in Manitoba and Saskatchewan.