Though soybeans are Ontario’s largest field crop, 2016 presented difficult conditions, with hot, dry weather continuing until August in many areas. As a result, soybean production was down overall, from 3,728,500 tonnes in 2015 to 3,374,700 tonnes in 2016, as reported by Statistics Canada. 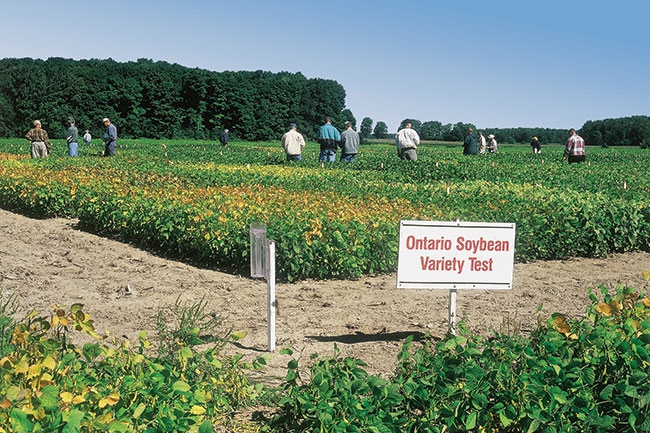 But according to Horst Bohner, soybean specialist for the Ontario Ministry of Agriculture, Food and Rural Affairs (OMAFRA), yields were “surprisingly high” at some of the sites in the 2016 Ontario soybean variety trials despite the weather.

“Although it’s not the case for all sites, we’ve had some tremendous yields over the last couple of years,” Bohner says. The trials are a collaborative effort run every year through the Ontario Soybean & Canola Committee (OSACC) and conducted by representatives at Agriculture and Agri-Food Canada, OMAFRA and the University of Guelph.

Like the province’s annual hybrid corn variety trials, the soybean trials offer producers a source for unbiased data on variety performance when it comes time to make seed purchasing decisions. They’ve been running since 1964. These days, data is collected from 19 sites across Ontario, from New Liskeard down to Woodslee, Bohner says. Teams gather information on yield, lodging and disease resistance; yield data is graphed showing days to maturity so producers can compare similar varieties, and the data is presented in one, two and three-year averages.

“You can really see that in the early zones, there is quite a difference in terms of yield potential of longer maturing beans versus shorter beans,” Bohner says. “It can be as much as 10 bushels over a 10 to 15 day period in maturity. It’s a very important thing to know.”

But Bohner says he sometimes comes across producers who don’t know about the trials or make use of the data. It’s not that producers don’t have other data on soybean varieties – they can also consult regional information, including information from seed dealers – and their own experience contributes the most important information. But the performance trials offer “the main piece of unbiased information in Ontario,” Bohner says.

Herbicide resistance
According to Tom Welacky, soybean data co-ordinator for the OSACC, roughly 270 varieties are tested each year from about 30 different seed companies and breeding programs at the University of Guelph, University of Guelph Ridgetown, Harrow Research Station and the Ottawa Research and Development Centre.

In Western Canada, breeding programs are focused on developing early maturing, shorter season soybean varieties; in Eastern Canada, these varieties are also under development for northern growing regions. The main driver, Bohner says, is herbicide tolerance – as in the Roundup Ready 2 and Xtend soybean varieties.

Xtend soybeans are part of Monsanto’s Roundup Ready 2 Xtend platform and are tolerant to both glyphosate and dicamba; they will be available for spring planting in 2017, following European Union import approvals in 2016.

Welacky says the variety trials offer a crucial intersection of information, by getting performance data out to producers as well as breeders. “These tests are all voluntary. Companies don’t have to sign up, but companies and public breeders alike are interested in having this data published. It offers a good perspective on how varieties perform,” he says.