Until recently, iron (Fe) deficiencies in field crops in the prairies were mostly unheard of until soybean acreages began to expand. In Saskatchewan, with the growing acreage of soybeans, iron deficiency chlorosis (IDC) began to show up in some soybean fields under certain soil and environmental conditions. 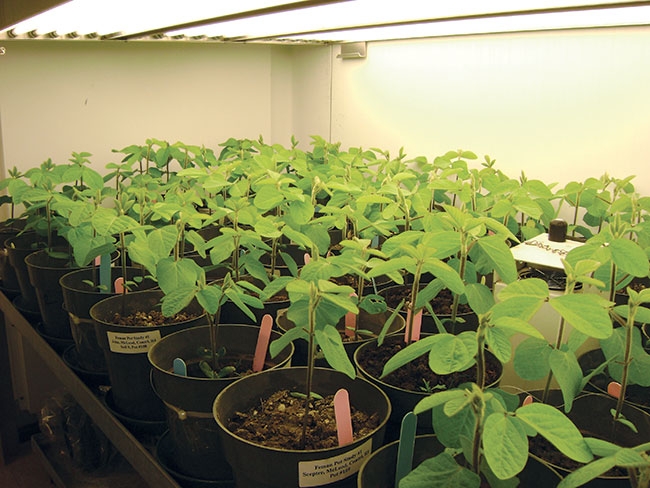 Although soybeans can sometimes grow out of a deficiency, researchers at the University of Saskatchewan wanted to find out more about IDC in Saskatchewan soils and under the province’s conditions.

“In more traditional soybean growing areas, such as in the United States, they have dealt with this for much longer, mainly addressing it through genetics,” explains Jeff Schoenau, professor with the department of soil science at the University of Saskatchewan and strategic research chair with the Ministry of Agriculture. “We wanted to learn more about the nature of iron deficiency development in soybeans under our conditions and to evaluate the effect, if any, of various iron fertilization strategies in our soils.” Led by post-doc Ryan Hangs, a two-year project was initiated in 2015 to answer some of these questions.

The two-year project included field studies and controlled-environment experiments to identify favourable combinations of soybean variety and soil type that result in IDC symptoms, and to assess the effect of different fertilizer Fe rates, formulations, and application methods. Two field studies were conducted in south-central Saskatchewan in 2015 and 2016 with IDC-prone soils that examined the ability of Fe fertilization to alleviate IDC in two soybean varieties: McLeod (IDC tolerant) and Moosomin (IDC sensitive). The study also included seven iron fertilizer treatments, varying in rate, form and application method, along with an unfertilized control. The treatments included soil-applied iron at seeding, and foliar-applied at the V2-V3 growth stage, comparing two different forms: iron sulphate and iron chelate.

Similar to other micronutrient deficiencies, the incidence of IDC is difficult to predict. It takes a unique combination of soil and environmental conditions for IDC to appear. Fields where IDC tends to develop typically have soils with a higher pH, and are often exposed to some flooding and saturation, elevated nitrate and salinity. Typical IDC symptoms are yellow (and/or necrotic) interveinal leaf tissue, especially on the upper leaves, while the leaf veins remain dark green. IDC can result in yield loss or plant death in extreme cases. Under some conditions, IDC might appear only for a short time and then disappear, while under others patches across the field may be impacted.

The project also included similar controlled-environment studies in the lab on a wider range of soils from several different locations across Saskatchewan. The findings were similar to the field trials, with responses explained primarily by soil and environmental conditions. With the exception of an IDC susceptible soybean cultivar grown on a flooded Black Chernozem soil, the Fe fertilization treatments had limited effect on grain yield. The most effective fertilizer treatment appeared to be foliar-applied chelated Fe.

“Keeping in mind the results are from just one field location and the controlled-environment experiments, a foliar application of iron appears to be an effective rescue strategy for IDC,” explains Schoenau. “If growers are concerned about IDC, have seen it before and have the kind of soil conditions conducive for development, selection of an IDC-tolerant variety may be wise. If they decide to grow an IDC-susceptible variety, then a foliar application could be a suitable rescue treatment if IDC arises. Most soybean seed guides will typically include an IDC rating, which is something that should be of interest to growers if they are concerned about IDC development.”

Schoenau emphasizes that although some fertilizer Fe treatments resulted in significant seed yield increases in the field, these were less than 10 per cent and Fe fertilization may not be economical unless the fertilizer Fe can be easily and precisely applied only to those field areas identified as suffering from IDC. From results of this study, precision foliar application appears to be the most effective Fe fertilization strategy if a grower decides to grow an IDC susceptible variety for reasons such as maturity, yield potential, or resistance to other stresses. Soil application of Fe fertilizer at seeding to the entire field would not appear to be justified.

“Overall the results show that soil and environmental conditions along with genetics ultimately control whether IDC develops and/or if fertilizer Fe applications are warranted,” Schoenau says. “If a grower decides to grow an IDC susceptible variety and IDC symptoms appear at the V1-V3 stage, then a precision foliar application of Fe to these problem areas as a rescue strategy would be more cost-effective than a soil application made at seeding to the entire field area. Growers who prefer not to take a risk or are unable to make a fertilizer Fe application if needed, can select varieties with high IDC tolerance, especially if conditions conducive to IDC exist or are anticipated.”