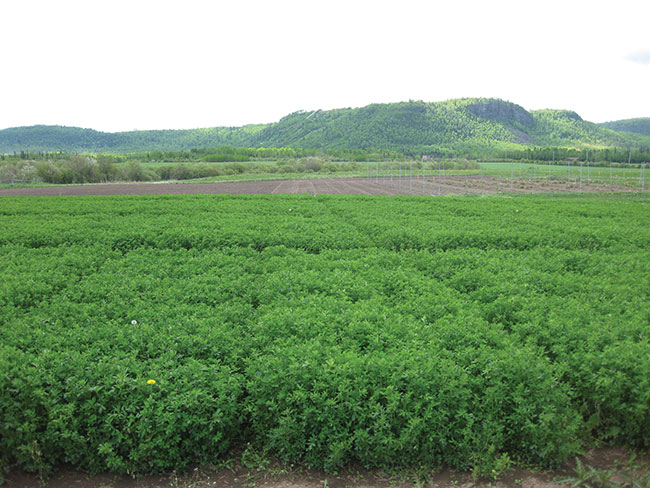 Alfalfa can have great yields, but it removes a high amount of soil nutrients. Photo by Top Crop Manager.

Alfalfa is an excellent yielding crop, but removes a relatively high amount of soil nutrients. Ensuring adequate soil fertility and wisely managing nutrient applications is key to growing alfalfa successfully. Alfalfa can produce from two to six tons per acre (ton/ac) of dry matter, depending on soil nutrients levels and environmental conditions such as stored soil moisture and precipitation.

Table 1 gives the approximate amounts of each nutrient removed per ton of dry matter alfalfa. A three-ton/ac alfalfa crop requires about 30 to 45 pounds per acre (lb/ac) phosphate (P2O5), 120 to 160 lb/ac potash (K2O) and 15 to 20 lb/ac sulphate-sulphur (S). Various micronutrients are also required in relatively small amounts, but micronutrient fertilizers are rarely needed for alfalfa in Western Canada. Alfalfa also requires about four to five inches of water for each ton of dry matter produced.

Nitrogen (N)
Nitrogen fertilizer is rarely needed for a healthy alfalfa field. Alfalfa is a legume crop that can “fix” its own nitrogen requirements. Most prairie soils are low in naturally occurring nitrogen-fixing bacteria. So, alfalfa seed should always be inoculated with the proper rhizobium bacteria strain, Rhizobium meliloti, just prior to seeding. Alfalfa seed is often pre-inoculated before sale. If the inoculant is not viable or the seed is improperly inoculated, poor N-fixation may occur.

After alfalfa seed germinates, the rhizobium bacteria will develop nodules on the alfalfa roots and live in association with the roots. The bacteria convert nitrogen gas (N2) from the air into ammonium that alfalfa can use, and in return alfalfa provides carbohydrates, oxygen and a suitable environment to the bacteria to survive. A five-ton/ac alfalfa crop can fix up to 250 lb/ac of ammonium nitrogen per year.

Alfalfa’s ability to fix nitrogen often declines after a stand about five years old. When alfalfa yield starts to decline, the stand should be terminated and re-seeded to annual crops for several years before being re-established to alfalfa.

Most Brown and Dark Brown soils in Western Canada have adequate amounts of available soil potassium. If soil potassium level is greater than 200 to 250 lbs/ac in the zero- to six-inch depth (ammonium acetate-extractable K soil test), then no additional K is usually needed.

Black and Gray soils more frequently test low in soil potassium. Generally, potassium is most commonly deficient on very sandy, intensively cropped soils. Potassium fertilizer is definitely recommended if soil levels are less than 200 lbs K/ac in the zero- to six-inch depth. If soil is marginally deficient in K, an application of 200 lbs/ac of K2O may meet crop requirements for three to four years, but if severely deficient, a batch application coupled with annual application may be required. 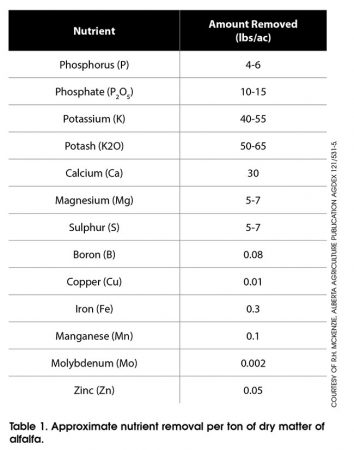 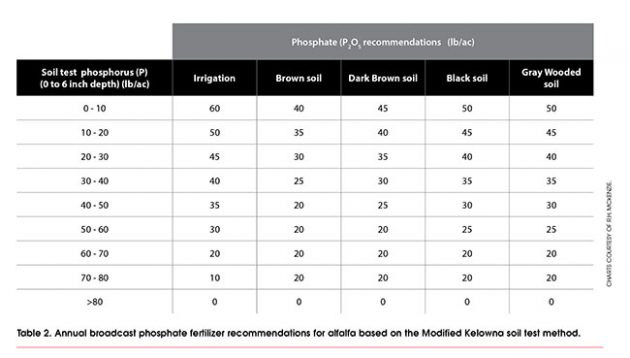 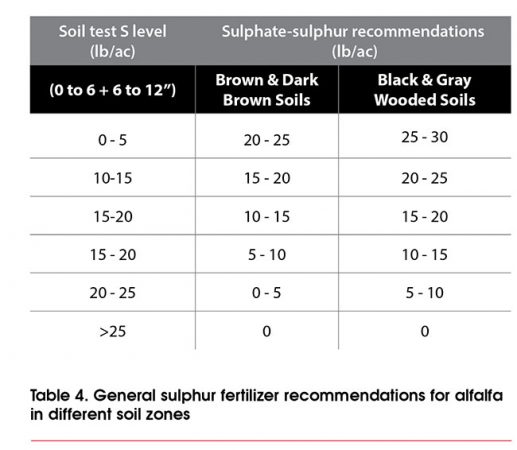 Acid soils and lime
Soil acidity can be a deterrent to alfalfa production. A soil test is the only reliable way of determining whether a soil is acidic. Acid soils occur most commonly in the Dark Gray and Gray soil regions. Soil pH in the range from 5.6 to 6.0 is moderately acidic and less than pH 5.6 is strongly acidic.

When soil pH is less than 5.6, a lime requirement soil test should be conducted, and the application of lime should be considered. A lime requirement test will determine the rate of lime required to restore soil to non-toxic levels. Estimating crop response and cost of lime will help to determine if it is economically feasible to apply lime to a field. Lime should be applied and well incorporated at least one year before establishing alfalfa to allow time for the lime to interact with the soil to increase pH level.

Fertilizer management of established alfalfa
Applying N fertilizer to healthy alfalfa stands is not necessary and not recommended. However, as mentioned, alfalfa yield tends to decline as the stand gets older. Application of N fertilizer may provide short-term benefit on older stands, but the termination of the stand should be considered.

Most Brown and Dark Brown soils in Western Canada have adequate amounts sulphate sulphur in the combined zero- to six- plus six- to 12-inch soil depths. However, Black and Gray soils more frequently test low in soil sulphate-sulphur. Generally, sulphate is most commonly deficient on sandy soils. Sulphate-sulphur is mobile in soil, easily moves downward under higher precipitation conditions and can be variable across fields

When a field is uniformly low in S, a soil test is useful to estimate S fertilizer needs. However, if only a portion of a field is low in S, it can be difficult to identify the deficient areas without intensive soil sampling.

When manure is applied to established alfalfa, it may burn the leaves, reducing yield and quality. Also, manure application equipment can cause soil compaction and damage alfalfa crowns if soil conditions are moist. If manure is to be applied to alfalfa, ideally it should be in compost form and applied in early spring.