A newly discovered pest is attacking soybean crops in parts of the U.S. Midwest. 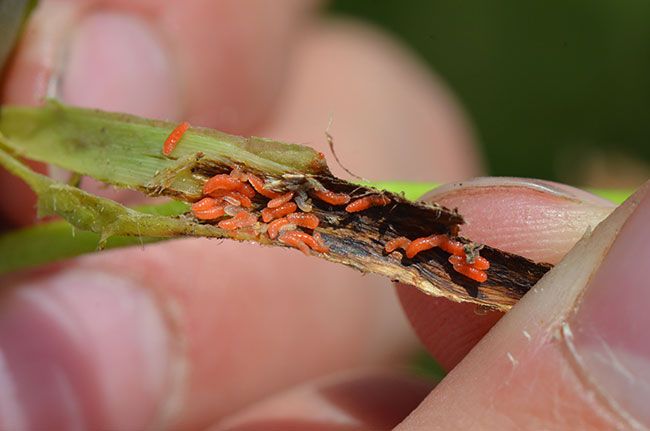 Over the past few years, soybean growers in a portion of the Midwestern United States have been suffering yield losses from a new pest: the soybean gall midge. Could this pest eventually come to the Canadian Prairies?

“The soybean gall midge is literally a species that is new to science. That doesn’t happen very often for U.S. or Canadian crop production; we tend to think of new insect species being identified down in the Tropics and places like that,” says Robert Koch, associate professor and extension entomologist at the University of Minnesota.

DNA and morphological analyses published in 2019 showed this insect is definitely a new species, now named Resseliella maxima. Although people noticed it in soybean crops a few years before that, it was thought to be a minor pest. However, an outbreak in 2018 resulted in crop injury and yield loss in many Midwest counties and showed the soybean gall midge could have economic impacts on soybean.

Koch says, “Based on reports from farmers seeing symptoms and so on, this pest was probably present in Minnesota for at least a couple of years before 2018, and maybe all the way back to 2011 in Nebraska.”

Research is underway in the Midwest to learn more about this very new pest and develop ways to control it.

That research includes surveys to determine the soybean gall midge’s distribution. So far, it has been found in eastern Nebraska, northwestern Missouri, western Iowa, eastern South Dakota and southwestern Minnesota. Bruce Potter, an integrated pest management specialist at the University of Minnesota, is leading Minnesota’s survey for this insect. “In 2020, this survey included over 300 locations spread throughout Minnesota,” Koch notes. “And the Minnesota effort ties into the larger regional effort in the Midwestern U.S. across those other states.”

As of September 2020, the pest had been detected in 16 counties in southwestern Minnesota, and a total of 114 counties in the five affected states.

Researchers have determined some of the basics about the soybean gall midge and its life cycle. The adults are small (two to three millimetres long), slender flies that look a little like mosquitoes. The adults do not feed on soybean plants; only the larvae cause crop damage.

The larvae overwinter in the soil of a soybean field and emerge as adults in the spring. Koch explains that the adults typically begin egg-laying at the edges of soybean fields, usually those nearest to the previous year’s soybean field. The infested area tends to spread farther into the field as the season progresses.

He notes, “The adults lay their eggs at the base of soybean stems. We suspect that they are laying their eggs into cracks in the stem. Then the larvae get into the stem and feed under the stem’s epidermis, its outer layer.”

Provincial entomologist John Gavloski with Manitoba Agriculture and Resource Development is keeping up to date with the U.S. findings on this pest. He explains that soybean gall midge larvae damage the tissues that transport water and nutrients in the plant. “In the stem, the larvae feed mainly on the phloem but may eventually move to the xylem and pith. Larval feeding causes blackened areas at the base of the stem, with heavily infested areas of the stems deformed and necrotic [brown or black dead tissue]. Stems can lodge or break easily at these areas. Injury can result in stunting, wilting and death of soybean plants.” The necrotic area on the stem might be confused with symptoms of Phytophthora or Rhizoctonia infections, so growers can check the blackened area to see if soybean gall midge larvae are present. Gavloski says, “If you peel back the epidermis in that necrotic area, you’ll find small, legless, reddish-orange larvae, unless the larvae are really young, then they might still be white.”

Under U.S. Midwest conditions, the pest has several generations per year, and those generations may overlap. Koch says, “The general feeling is that we get three flights of adult activity throughout the region. The first flight is when the adults emerge in early spring. And then there are two more flights in the summer. I think that third flight, or the third generation, has been more pronounced a little farther south into Nebraska and Iowa.”

Although the pest’s most important host is soybean, University of Nebraska-Lincoln research has identified sweet clover and alfalfa as alternative hosts.

To figure out how to manage this pest, researchers in the Midwest have initiated a wide range of studies, including both chemical and non-chemical control options. “All that research is still in the early phases, but it seems like this will be a tough pest to manage,” Koch notes. For example, he points out that the larvae would likely be hard to control with foliar insecticides because they are protected within the soybean stems. And managing the adults with foliar sprays would likely require several applications because of the insect’s multiple generations and the adult’s long emergence window. 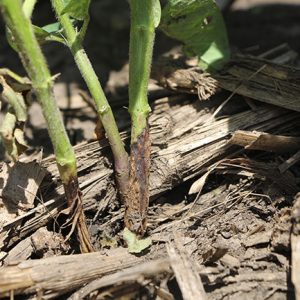 Feeding by soybean gall midge larvae causes blackened areas at the base of soybean stems. PhotoS courtesy of Bruce Potter, University of Minnesota. 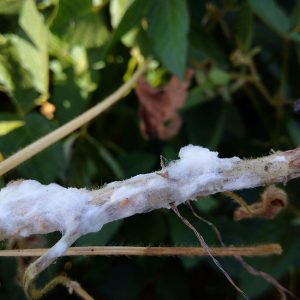 Although the white-mold gall midge also has orange larvae, those larvae are found in association with Sclerotinia white mould fungus. Photo courtesy of Ingrid Kristjanson, Manitoba Agriculture and Resource Development.

Cultural control studies are exploring various possibilities. Koch says the results so far from soybean planting date studies suggest that later planting enables the crop to avoid some of the pest’s earlier infestations. Studies are underway to see if tillage disrupts the insect’s overwintering stage. Some research is looking at the effects of mowing the natural vegetation along field borders, which might help if the adults are using those areas as habitat. And researchers are searching for soybean varieties with some tolerance or resistance to the pest.

Looking at the year-to-year increase in areas where surveys have detected soybean gall midge, you might think the pest is spreading a little farther each year. However, Koch says, “I’m not sure if what we’re seeing is spread or if it is just the effect of us searching wider and harder, and finding the insect where it has been for a while. Or maybe it is some combination of those. It’s hard to tease those two apart because we can’t really know how it’s spreading or how fast it’s spreading until we know where it’s been for a while.”

“Soybean gall midge would have a considerable distance to move north before we would have it in Manitoba. I don’t expect it soon, unless it was human-assisted movement. We’re probably talking several years at the earliest for it to naturally spread to Manitoba from South Dakota and southwest Minnesota,” Gavloski notes. “Whether or not it could even make it to Manitoba and survive here is still an unknown. We don’t really know anything about its overwintering biology.”

Growers on either side of the Canada-U.S. border who are on the lookout for the soybean gall midge need to be aware that there’s another gall midge species with orange larvae that could be in their soybean crops. It is the white-mold gall midge (Karshomyia caulicola).

“So the white-mold gall midge is not a crop-specific insect, and it is also not an insect that we need to be worried about economically.”

“The soybean gall midge larvae will be found under the soybean stem’s epidermis in an area that is discoloured and sometimes somewhat distorted near the base of the stem.” Koch says. “The white-mold gall midge will be found in association with the white mould on the plant. If you’ve got favourable conditions for that fungus, and you can easily see that white fuzzy stuff on the exterior of the stems or even inside the stems, that is where the white-mold gall midge would be found. If the conditions turn a little drier, sometimes it is not as easy to see the fungus on the plant, and it might not be so obvious that those larvae are in association with the fungus. But even so, the white-mold gall midge larvae are not likely to be at the base of the stem within a necrotic area.”

It will hopefully take years for soybean gall midge to spread to Canadian fields – or it never does. However, if Manitoba growers suspect they might have the pest, they should contact Gavloski. Growers in other provinces should contact their provincial entomologist.


Related
What we know (so far) about the new midge on the Prairies
Prairie producers on the lookout for bertha armyworm and wheat midge
Canola flower midge: The story continues
Assessing the swede midge threat