Recent research expands our knowledge on this new canola insect. 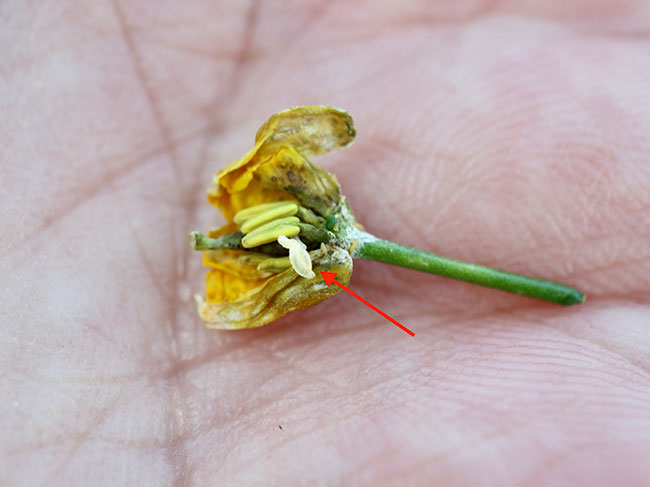 Canola flower midge larvae in a typical galled flower that has been opened. Photo courtesy of Jennifer Bogdan.

When a new insect species is discovered, the questions are many and the answers are few.

Galls on flowers created by midge larvae found in canola fields in northeast Saskatchewan since 2012 were first thought to be caused by swede midge (Contarinia nasturtii). It wasn’t until 2016 when Boyd Mori, now assistant professor at the University of Alberta, confirmed that this midge was actually a new species. The new midge species, now known formally as Contarinia brassicola and informally as “canola flower midge”, was officially described in 2019 by Mori and colleagues.

“There is still much to learn about canola flower midge. We have yet to see many fields with economic damage but we don’t know what conditions could lead to more large-scale damage, and this is concerning. We need to learn more about the midge overall to determine if it may become a larger issue, and how we could manage it in the field,” Mori says.

Research on the distribution and biology of canola flower midge has been completed in a project co-led by Mori and Meghan Vankosky, research scientist with Agriculture and Agri-Food Canada in Saskatoon. The objectives of this project were to determine the distribution of the midge across the Prairies, investigate its life history and population genetics, and to identify any natural enemies of the midge.

There were no swede midge detected in pheromone traps and no swede midge symptoms found in the fields throughout all years of the study. These observations further confirm that swede midge does not occur in the Prairie provinces.

Two generations of midge produced during the growing season
Emergence cages were set up early in the growing season on current year canola fields and previous year canola fields (canola stubble). Adult midge were recorded and two peaks of flight activity were observed in all three years of the project, suggesting that canola flower midge undergoes two generations per year on the Prairies (Figure 2).

“The first peak occurs around mid-to-late June, when adults emerge from their overwintering cocoons in the soil. These adults mate and lay their eggs on or near canola buds, or tucked inside opening canola flowers. Larvae were only found inside the developing canola flowers and their feeding results in galled flowers that do not produce pods. These larvae drop to the soil to pupate. Then a second peak of adult activity occurs in late July to early August, when a second generation of adults emerges,” Vankosky explains. 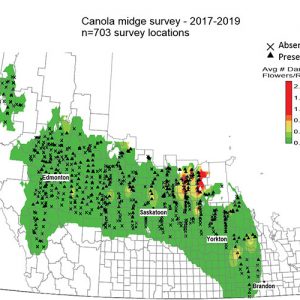 Figure 1: The distribution of canola flower midge across Western Canada based on data collected in 2017, 2018 and 2019. Source: Mori and Vankosky 2019; Map courtesy of R. Weiss. 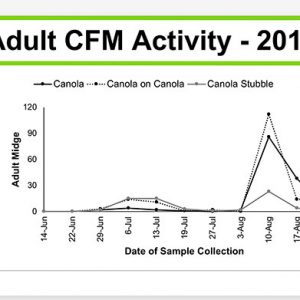 Figure 2: Adult canola flower midge activity in 2018. The number of adult midges reported are the cumulative total collected from all emergence cages during each week (not an average total per cage). 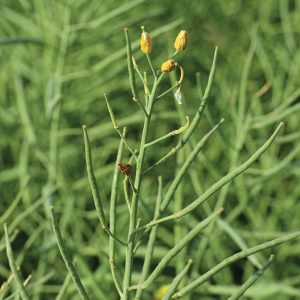 Figure 3: Galled canola flowers concentrated at the top of the raceme are the result of damage from the second- generation of canola flower midge larvae. Damage at this later crop stage is not nearly as economical as earlier first-generation damage, since later flowers do not always translate into harvestable pods for a variety of reasons, as evident by the small pods surrounding the galled flowers on this raceme. Photo courtesy of Jennifer Bogdan.

In studying the biology of canola flower midge, Mori and Vankosky also attempted to estimate the impact of the midge on canola yield. This proved difficult to do in field conditions because midge populations have patchy distributions, both in and between fields. The vast majority of fields surveyed between 2017 and 2019 had no more than one galled flower per raceme, so the risk of economic yield loss was generally low. However, some fields were observed with much higher levels of damage, where yield loss might have occurred. “We still don’t know how the midge is distributed within fields, such as at the edges versus the middle of the field,” Vankosky says.

According to Vankosky, “It is the first generation of midge that will have the greatest impact on yield because their larvae are damaging flowers during the early flower stage of the crop. By the time the second generation of midge is present, the crop is nearing the end of flowering so the larvae are likely damaging flowers that would otherwise perhaps produce smaller pods or pods that would still be immature when the crop is harvested.”

“Maybe the canola flower midge is native or maybe it’s invasive and we just haven’t noticed it here at these low levels for such a long time. There is definitely more research needed to determine whether it is a native species or not,” Mori explains.

Parasitism of canola flower midge is low, but it does exist
Two parasitoid species, Inostemma spp. and Gastrancistrus spp., have previously been identified attacking canola flower midge larvae in Saskatchewan. Out of the three years of the study, the greatest levels of parasitism occurred in 2017 and ranged from zero to 33 per cent. Vankosky says that the parasitoids are in the queue to be identified to the species level, by expert taxonomists.