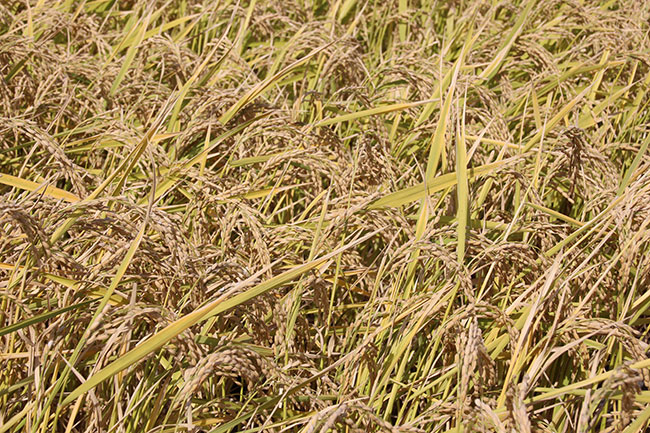 The trial, which was done in collaboration with U of G-Ridgetown researcher John Zandstra, produced rice yields that are comparable to those in China. Photos courtesy of Ontario FangZheng Agriculture Enterprise Inc.

At first glance, growing white rice – a semi-aquatic plant – might seem like a surprising idea for crop production in Ontario fields. And yet the United States has successfully produced rice for years. Now, an effort is underway to start delving into all the considerations that need to be addressed to develop rice as a commercial crop in southwestern Ontario.

The U.S. is one of the top rice exporters in the world. Statistics from the U.S. Department of Agriculture show that, from 2007 to 2017, average returns on rice production were much higher than for any other major field crop. The crop is grown mainly in Arkansas, Texas, California, Louisiana, Mississippi and Missouri.

“In the U.S, rice production is done profitably and it has been for many, many decades,” notes John Zandstra, professor of fruit and vegetable cropping systems at the University of Guelph’s Ridgetown Campus. “So we might be able to grow it here. But rice production is very different from anything we have done here.”

Zandstra is working with Ontario FangZheng Agriculture Enterprise Inc. on the rice research. This effort began in 2016 as part of an initiative by the municipality of Chatham-Kent to work with China to look for shared economic development opportunities. One of those potential opportunities was rice production.

“When I first heard that a group from China was interested in developing rice as a crop here, I kind of chuckled because rice is traditionally grown in warmer climates. But over the years, the Chinese have developed cultivars that can grow in cooler conditions. So now they grow the crop in areas with a similar climate to ours,” Zandstra says.

As he discussed the possibility of rice production with the company, he realized that they needed an interpreter with good agricultural knowledge, so he thought of Wendy Zhang. “At the time, Wendy was a graduate student with one of the other researchers on this campus. She was from China and she knew agriculture – her family is actually involved in rice production – so I asked her to be the interpreter.” The company hired Zhang, first as an interpreter and then as the manager of the rice research project and manager of the small farm west of Chatham that Ontario FangZheng has purchased.

Zhang, who now has her master’s degree, is conducting rice production trials on this 70-acre farm. “Ontario is a gift place for many kinds of crops, and it is easy to find places in southwestern Ontario that fit the essential requirements of rice production: a flat field and water resources,” she explains. The farm has both of those critical elements, as well as clay loam soils that are good at holding water.

For the trials, they selected a variety of rice that is grown in northern China. Zhang says, “We chose a rice variety suited to the local environment and the length of the growing season here in the Chatham area. We need a variety that can produce satisfactory yields and we hope it will grow well in this new environment.”

In 2018, they obtained the rice seed from China. Zandstra and his research group grew some of the seed in the greenhouse at Ridgetown, providing an initial look at the plant’s growth and development. They also helped Zhang with some of the logistics of rice production, like where to buy agricultural inputs and how to apply for water permits, and with her preparations for her 2019 field trial.

“We made some paddy beds in the fall of 2018 and we got Wendy set up with pumps,” Zandstra notes. “She made the applications to take water [from a municipal ditch that runs by the farm], and got everything ready for a one-hectare [2.5-acre] field trial in 2019.”

For this 2019 trial, Zhang grew the seeds as transplants in a small greenhouse on the Ontario FangZheng farm and transplanted them in mid-May.

As well, Zhang and Zandstra both did a little experimenting with planting the seed directly into the field. Zhang planted some seed by hand in a little corner of a paddy, and Zandstra and his group set up a small paddy at the Ridgetown campus where they grew some seed and tried different fertility levels. He says that these little direct-seeded test areas seemed to grow quite well, but the researchers didn’t collect any data on plant growth or yields.

“Using transplants is expensive because of the greenhouse cost, the labour involved and the specialized machinery. In the southern U.S., they direct-seed rice. They either flood the paddy and then fly an airplane over and drop the seed, or they use a grain drill, like we would use to plant wheat, and then flood the paddy afterwards,” Zandstra explains.

“However, the risk with direct-seeding here is that we would run out of time [if the growing season in southwestern Ontario is too short]. With transplants, you’re getting two, three, four weeks of growth before you put them in the ground.”

For this trial, Zhang generally followed the recommended practices used in rice production in China for things like fertilizer management, water management and so on.

“Rice production uses much less water than I would have thought,” Zandstra says. “Just from what I had seen in movies and such, I had imagined that you would be up to your ankles in water. But having visited China [as part of this project] and watching Wendy do it, it doesn’t use nearly as much water.”

Zhang notes that she is using a new method for flooding fields that doesn’t require as much water. Most of the time, the water on the paddy only needs to be a few centimetres deep, enough to cover the ground.

“When the crop is close to being ready for harvesting, we stop pumping water and let the field naturally dry out. We try to avoid letting any water go back to the drainage ditch. This can help to prevent water pollution and leaching,” she notes.

The trial didn’t have any disease or insect pest problems, but there were a few weed problems. Zandstra says, “The water will control perhaps 70 per cent of the weeds that you would see in an open field. But you get different weeds. For one thing, bulrush can come in because bulrush seeds float around in the water. And when bulrushes get established, they are quite difficult to pull out. So, in the trial, they had to do some hand-weeding because, of course, at present Canada does not have any registered crop protection products for use on rice.”

Rice production requires some infrastructure for pumping and managing the water and some specialized field equipment. “We imported some new machines that can work in rice paddies. These included a specially designed tractor, a rice transplanter, a berm builder, and so on,” Zhang notes. She wasn’t able to find any of these machines locally, but she expects that as more farmers in the area start to grow rice, the local equipment dealers will start to offer this type of equipment.

The field was harvested in late September. Zandstra says, “They used an ordinary John Deere combine; there are rice settings in the combine. There is also some combine hardware – plates that you would purchase to add onto the combine – for rice harvesting, but we didn’t bother with that for this trial. So there was a little more grain left on the field than we like to see, but it wasn’t too bad.”

The yield from the trial was about 153 bushels per acre (6,885 pounds per acre). “The yield was comparable to what you would have in China,” Zandstra notes. He was impressed that this first try at rice production worked out so well. 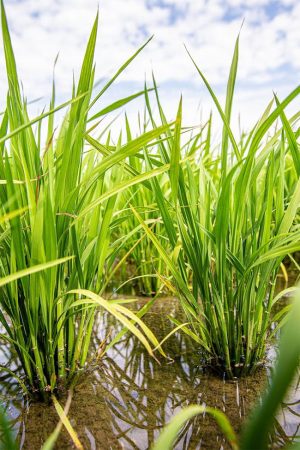 For most of the growing season, the water on the rice paddy is only a few centimetres deep. Photo courtesy of Ontario FangZheng Agriculture Enterprise Inc.

Plans for 2020
“In 2020, we are going to expand our rice production to 70 acres,” Zhang says. “This will help us have a better understanding of the costs and benefits of growing rice commercially. We will also keep going with our research trials to modify the rice production into a Canadian style.”

Zandstra and Zhang are in the process of developing their research plans for the coming growing season. “With any new crop, you try to tailor your production practices to local conditions. So, there are a lot of things I would like to try,” Zandstra says.

“I have an interest in fertility levels, plant density and direct-seeding versus transplanting, water-use efficiencies – there are all kinds of things we can play with. One of my colleagues is a horticultural weed scientist, so we’re trying to get him on board to do some weed control trials with herbicides that are already registered on rice in the U.S.”

He adds, “I find this work really, really interesting. It’s all new and all different so it’s a learning curve. It’s fun to try, and hopefully something good comes out of it [for Ontario farmers].”

She is hopeful that rice will find a place in Ontario crop production systems. “Some Ontario farmers have to pump water out of their fields in the spring. Ontario usually has enough rainfall, but sometimes the rain comes at the wrong time for cash crops. So why don’t we try some crops that like wet conditions? Rice will give the farmers more options [especially if they have flat fields with poorly drained clay soils].”

Zhang also thinks Ontario rice could find a market with consumers interested in locally grown food. “We believe that once people discover how tasty Ontario-grown rice is, they will like it.”

In the long run, Ontario FengZheng would like to see many Ontario farmers growing rice, and Zhang is working to make that a reality.

“The first one is the revenue. We need more production years to collect data on rice yields and production costs, and we need to look into potential markets and prices for Ontario rice. If the crop is profitable, that is always the best encouragement for producers.

“The second concern is that farmers here do not like to flood their fields because it would create more work and increase the risk of soil compaction. My company is working on testing a different way of flooding the rice to minimize their concerns.

“The third one is how to make the production process easier to use with local equipment and facilities. These are the three major areas I’ll be working on in the next few years.”