In 2016, a survey conducted by the University of Guelph’s Ridgetown Campus found that producers believe lamb’s-quarters to be their “worst weed” overall across Ontario. 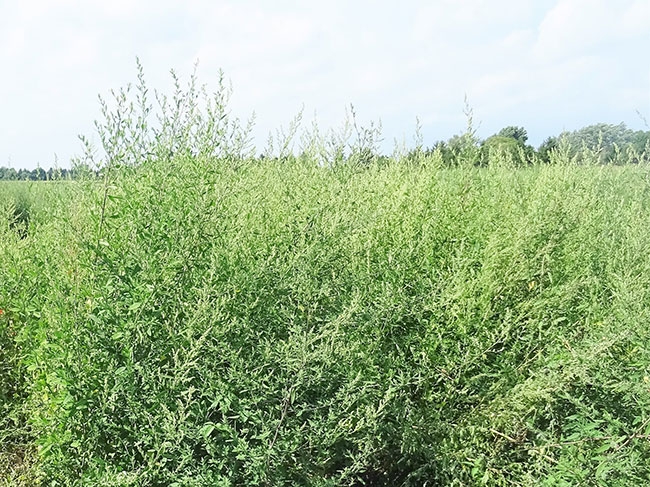 Ontario has populations of lamb’s-quarters that are resistant to Group 5 herbicides and Group 2 herbicides. In 2016

David Bilyea, a technician at Ridgetown, authored the survey and sent it to about 1,000 producers; 300 or so responded.

Though he would have liked to see more data, the survey results are interesting, says Bilyea, because they reflect producers’ experience on all types of agricultural operations: tilled and no-till, horticultural and field crops.

Mike Cowbrough, weed management (field crops) program lead for the Ontario Ministry of Agriculture, Food and Rural Affairs (OMAFRA), co-ordinated a similar survey in 2014 that found that lamb’s-quarters was one of the most prominent weeds found in corn and soybean fields.

He’s the author of the newly released Problem Weed Guide for Ontario Crops (Volume 1), which cites research conducted by the University of Guelph’s department of plant agriculture, as well as other peer reviewed studies and offers management strategies for 19 weed species.

In a chapter dedicated to lamb’s-quarters, Cowbrough writes that although the weed is often identified as one of the most problematic in Ontario, there are many herbicides registered for use against it.

“It’s safe to say there is an arsenal of products available to farmers but our focus should be on putting them in a position to work well,” Cowbrough writes.

The size of the plant at application matters, as well as the time of application. Studies show plants should be less than 10 centimetres (cm) tall at application of glyphosate; control is most consistent when plants are 2.5 cm tall, and the best control happens when applications are made before 6 a.m. and after 9 p.m.

Resistance
Ontario currently has populations of lamb’s-quarters that are resistant to Group 5 and Group 2 herbicides. There are no confirmed cases of glyphosate-resistant lamb’s-quarters in Canada, but a variance in levels of control amongst different populations has been noted in the United States.

In the weed guide, Cowbrough writes that dicamba-resistant lamb’s-quarters has been found in New Zealand, and the introduction of dicamba-tolerant soybean cultivars such as Roundup Ready 2 Xtend has the potential to increase use of dicamba in field crops and select for dicamba resistant populations in the province.

According to François Tardif, a professor at the University of Guelph’s department of plant agriculture, lamb’s-quarters can be considered one of the most underestimated weeds in Ontario.

“It is on many herbicide labels, farmers have good tools to control it, yet, whenever we look at escapes later in the season, more often than not, it is lamb’s-quarters,” he says. “There is something about this weed that makes it hard to get, and it is not only resistance.”

Tardif has studied resistance in a variety of weed species, and he says lamb’s-quarters behaves differently in terms of resistance. With pigweeds, nightshades and foxtails, he says, the strike rate as far as resistance is concerned is about 90 per cent, meaning that when farmers see escapes they are likely resistant weeds. But with lamb’s quarters, the strike rate is only about 50 per cent.

“This means that when farmer report escapes, resistance is only half the cases; the other cases are plants surviving for unknown reasons. While unknown, these reasons are real, it is just that we don’t know what they are.”

Until those reasons are known and better controls are introduced, producers will be contending with lamb’s quarters, so they shouldn’t underestimate it.