Since the early 1980s, dry beans have been grown under irrigation in southern Alberta. Dry beans are currently the second highest valued irrigated crop on a per acre basis in Alberta, and average 45,000 to 50,000 acres annually.
Until recently, dry beans have been traditionally grown under wide-row cropping systems, but some growers are moving to narrow-row solid seeded bean production.

“One advantage solid seeded beans offer – and why some new growers have started growing them – is they are able to use conventional seeding equipment instead of having to use specialized row cropping planters,” explains Pat Pfiffner, agronomy technologist with Alberta Agriculture and Rural Development (ARD) in Lethbridge. “With solid seeded beans, growers can use seed drills that they would normally use to seed cereal and oilseed crops. For growers who are currently growing row crops, they will likely stay with their current wide-row system.”

Researchers at ARD initiated a four-year project in 2010 to try to answer some of the questions around agronomic factors affecting solid seeded bean production. The first experiment included three row spacings, four seeding rates and two bean varieties. Row spacings were at seven, 14 and 28 inches (18, 36 and 70 centimetres), and the seeding rates at each row spacing were 10, 25, 40 and 55 seeds per square metre. Varieties included Winchester (Pinto variety) and AC Resolute (Great Northern variety). Blanket fertilizer rates of pre-banded N at 100 kg/ha and P2O5 at 20 kg/ha were applied for all treatments. In a second experiment, four N fertilizer rates of zero, 30, 60 and 90 kg N/ha (zero, 27, 53 and 80 lbs. N/ac) with and without inoculant were compared.

In the third experiment, two fertilizer forms were compared: urea and ESN (a slow release polymer-coated product), and were side banded at six different fertilizer rates, zero, 30, 60, 90, 120 and 150 kg N/ac (zero, 27, 53, 81, 107 and 134 lbs./ac). This experiment also compared split application treatments, receiving 60 and 90 kg N/ha (urea and ESN) applied at seeding, plus an additional 30 kg N/ha in-crop urea applied before flowering. For all plots, a pre-banded application of 30 kg/ha P2O5 was applied. A total of 14 nutrient management treatments were compared.

Inoculant provided a yield benefit
The results from the second experiment comparing four fertilizer N rates with and without inoculant showed that using an inoculant significantly increased yields in six of 12 site years. Results indicate an average yield increase of 175 kg/ha (160 lbs./ac) over the term of the project. “Dry beans are the least efficient N fixers in the legume family, only able to fix between 30 to 40 per cent of their N requirements,” says Pfiffner. “We used modest N rates with and without inoculant and found the yield increase with inoculant was consistent at all four N rates.”

Pfiffner adds that currently less than half of bean growers use inoculants partly because they are not convenient to use and partly because historically adequate inoculum was available in the soil and aggressive N applications were sufficient. However, this study shows there is a significant yield benefit to using inoculants for dry bean production.

Increase N and P for narrow row seeding
Results from the third experiment comparing two fertilizer forms, various rates and split N application found there was a significant or strong tendency response in yields in eight of 12 site years. The ESN form showed a slight advantage over urea in half of the site years, resulting in an increase in yields of about 110 kg/ha (100 lbs./ac). The results showed that at narrower row spacing and higher seeding rates, fertilizer rates for N and P need to be 20 per cent higher than the recommendations for wide row spacing. The split application treatment results did not show any significant differences in yield.

“One of the key findings was that solid seeded beans develop a denser canopy earlier in the season, which can lead to higher humidity and higher disease incidence, particularly for white mould,” explains Pfiffner. “Dry warm weather is the best defense against white mould, but growers can use properly timed fungicide applications and carefully manage irrigation water application to limit disease incidences. Growers may also have the option of choosing more upright varieties that have more open canopies.”

Overall, the results from the project show that growers can achieve similar or slightly higher yields with solid seeded beans, opening up the opportunity for bean production for growers who don’t have specialized row-cropping equipment. The research shows that narrow row bean production benefits from inoculant use and requires approximately 50 to 60 per cent more seed and 20 per cent more fertilizer than wide row bean production. The added benefit to industry is the potential to increase and stabilize annual production for industry. Swathing of solid seeded fields requires careful attention to limit harvest losses. As a benefit, swathing reduces dirt and dirt tag at harvest, compared to wide-row crops that are undercut prior to combining. 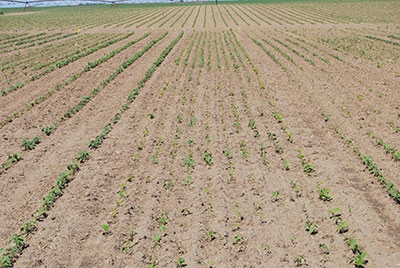 Emerging bean seedlings Dry beans are currently the second highest valued irrigated crop on a per acre basis in Alberta.