Features Agronomy Soil
Soil testing – the art of the science

Question 2. What is different now from when soil testing was introduced in the mid 1960s?
Soil sampling – Traditional sampling schemes assumed that fields are uniform; therefore, they involved collection of randomly selected soil cores that are mixed together into one sample.  Hence, the principle of “field representation” was developed. With banding of fertilizer, direct seeding, minimum tillage, no tillage, etc., statistical representation of the fertility level of a field almost seems to have become an exercise in statistics rather than a practical method of assessing the nutrient status of a field.  Averaging (mathematically or mechanically through sampling) of on-the-row and off-the-row nutrient levels often results in nutrient levels that relate to “nothing” and so would be inapplicable in other situations.

Chemical extraction and analysis – The soil physical and chemical characteristics represented by the soil analyses or soil tests probably represent the only factual information on a soil test report –  factual because a sample was analyzed by a laboratory and a “number” was generated.  Unfortunately, these “facts” are occasionally peculiar only to a certain laboratory and do not apply to another. Interpretation of these physical and chemical characteristics, however, is often influenced by a tendency to attribute “absolute” value to a soil test report, rather than accept it as an abstract.

I have argued in the past that a soil test report, usually one page in size, contains information in an abstract” form.  “Abstract” is defined in the Oxford dictionary as “a summary or statement of the contents of an entity” (book, etc.). In the case of soil testing, the soil-test report is an abstract of all the scientific research carried out on a specific nutrient or, in some cases, the interaction between nutrients. The quality of the abstract will no doubt reflect the quality of the scientific research it summarizes and the ability and understanding of the subject by those who wrote the abstract.

That is why I often define soil testing an “art based on scientific data.” Often, the “artist(s)” (e.g., state or provincial councils or committees, the laboratory agronomist) express(es) views that are difficult to trace back to scientific publications and often reflect the “artist(s)’s” experience. Therefore, knowing the “artist(s)” often is of critical importance in appending trust to the interpretive portion of a laboratory’s soil test report.”

A common misconception is that soil-test levels represent “plant available” nutrients (CAST 2000). “Rather, soil test procedures sample this continuum by extracting different amounts of nutrients depending on the soil extractant. The extractant used will depend on soil properties and the overall purpose of soil testing.” [CAST (Council for Agricultural Science and Technology).  2000.  Relevance of Soil testing to Agriculture and the Environment.  Issue Paper.  CAST, Ames, Iowa.]

Correlation and calibration – A soil test level by itself means absolutely nothing and, often numbers expressed in either ppm or lb/acre are given quantitative meaning that they do not have.  These numbers are merely indices that obtain a meaning only when they are correlated with plant nutrient uptake and/or calibrated with plant yield.

Understanding the rules of correlation is also extremely important, as highly significant correlations do not necessarily mean that changes in the yield of a crop can be fully explained by the variation in the soil test level of a nutrient. This is the one step that is the most commonly abused as people attempt to incorporate “innovations” into the soil-testing process.

Contrary to common belief, there is no right or wrong recommendation as long as the soil-testing process has been adhered to and the basis (philosophy) of the recommendation has been communicated to the user. In a way, much of the problem in offering recommendations for direct-seeded and no-tilled fields probably lies with adherence by laboratories to the principle of sufficiency. This is not incorrect; however, implementation of this philosophy requires that a sample is taken and the latter is increasingly becoming a greater challenge.  Recommendations based on replacement can correct this problem, but at the same time, create another by generating recommendations for nutrients that are not needed.

Question 3. Who is doing the necessary research on recent farming innovations?
A lot of the research these days is in the form of demonstrations and testimonials. The advent of computers combined with “common agronomic sense” has also served as a substitute, actually often a very poor substitute, of soil-testing research.  Many deductions have no scientific basis or proof that can be applied under a variety of conditions. The very limited research carried out by research units of government and universities focuses either on trendy subjects, e.g., variable rate fertilization, or environmental issues, although funding in this area is also starting to dwindle. In Western Canada, many other innovations are transferred from other areas, e.g., weak Bray/strong Bray extraction for P, and with no calibration work or even chemical basis for their adoption in Western Canada. 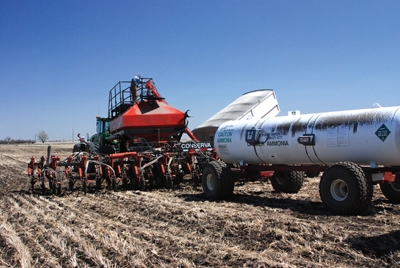 Soil test recommendations that guide fertilizer applications are an often misunderstood part of the process. We all know the four steps in the soil-testing process (soil sampling