Features Agronomy Soil
The art and science of soil testing

Send five soil test samples to five different labs and you’ll likely get five different recommendations. Understanding why will help you get the most out of your fertilizer dollars and optimize yields over the long term. 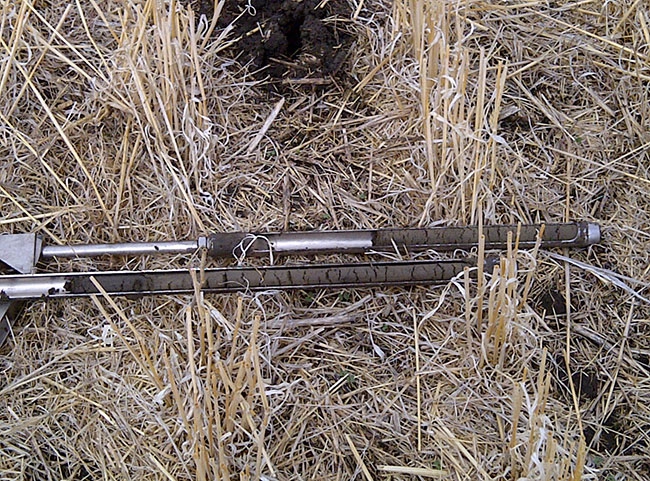 “Soil testing is a tool – yes, a tool, not an absolute science – that allows producers to make more qualified fertility management decisions based on soil nutrient inventory and interpretive criteria based on a specific philosophy,” says Rigas Karamanos, senior agronomist with Koch Fertilizer Canada in Calgary.

Karamanos has been involved in soil fertility for many years, stretching back to when he managed the Saskatchewan Soil Test Lab from 1989 through 1997, after which he joined Western Cooperative Fertilizers and then Viterra, overseeing fertility research and recommendations. He has long been an advocate for understanding how soil testing fits into fertilizer recommendations, and says that in order to properly use soil tests, growers and agronomists have to understand the value, capabilities, and limitations of the tests.

Karamanos says four important steps are part of the art and science of soil testing: sampling; extraction and chemical analysis; correlation and interpretation; and fertilizer recommendations. Get one wrong and the rest doesn’t matter.

Sampling
When it comes to sampling, Karamanos says there are well-established guidelines for when and how to soil sample in the spring or fall, but many people do not understand the errors that are inherent in taking samples. Research conducted by Karamanos in 2001 showed sampling error is as high as 25 per cent for 16 random samples from a field, 22.4 per cent for 20 samples and 17.8 per cent for 30 samples. On top of that, soil analysis in the lab can also add in about 11 per cent variability. In the end, a resulting recommendation would be accurate within plus or minus 33.5 per cent.

“The goal of sampling is to try to minimize variability, and the more samples you take, the more accurate the recommendation will be,” Karamanos says.

Extraction and chemical analysis
Different labs utilize different methods and interpretations when analyzing soil samples. Karamanos says the important criteria for evaluating a lab is the compatibility of analysis with western Canadian soils, and whether the lab’s methodology is calibrated with local field research. For example, the use of a weak acid extract on a calcareous soil would be ineffective since the acid would react with the lime in the soil and the extractant would be just water.

When testing for nitrogen (N), all extractants are made with water, as nitrate in the soil is water-soluble and nitrate is what is measured in a soil sample. There are several methodologies for extraction when looking at soil pH, electrical conductivity, and organic matter. All can influence the final soil test recommendation by making assumptions – for example, how much nitrogen may be mineralized from organic matter.

Phosphorus (P) testing methods become more complicated. In Manitoba, the “Olsen” (sodium bicarbonate) technique measures extractable P in the top six inches of soil. This is the accepted testing method used for Manitoba’s provincial recommendations, as well as for regulating the allowable P application rates; Manitoba is the only Prairie province that regulates P application based on soil test values. In Saskatchewan and Alberta, provincial recommendations are based on the modified Kelowna test, which has been proven to be reliable for a wide range of soil pH levels. Samples from Manitoba tested in a Saskatoon lab may use the Olsen method to ensure consistency with Manitoba regulations.

Other tests include the weak Bray, strong Bray and bicarbonate tests, with each extracting different levels of P from the soil sample. As a result, test results from one extraction method cannot be easily compared to those from another.

Correlation and interpretation
Karamanos says one of the most important considerations in soil testing is that no matter what extraction method is used, it must be correlated and validated with local field data in order to be useful for making fertilizer recommendations.

“Remember: no matter what one uses, the test is done ahead of the growing season. Therefore, all methods, whether chemicals, membranes, resin or even plants grown in pots, they simulate plant roots and have no value unless they are correlated with crop yields.”

Correlation is achieved by taking the various extraction levels from a soil sample and testing fertilizer recommendations in the field to develop response curves. The process is costly and intensive, which is why much of the correlation work was done many years ago. A good example is the P correlation work conducted by Ross McKenzie at Alberta Agriculture in the early 1990s. In the calibration graph, each point represents a study conducted at a particular site-year. The scatter shown in the relationship between soil test P level and relative yield provides an indication of the inexactness inherent in using soil tests to predict the relative degree of crop response under specific conditions.

This calibration research also establishes a critical level (sufficiency) of 20 to 25 parts per million of P (40 to 50 pounds P per acre, or lbs/ac). Karamanos says this means soils testing at this level will support most of the canola crop P needs. In this case, P application should focus on providing some starter P and replacing the P from crop removal (0.7 to 0.9 lbs. P2O5 per bushel of canola).

Philosophies for soil test recommendations
Soil test labs, agronomists and growers take different approaches to fertilization. The main philosophies behind recommendations are sufficiency and build and maintenance. The decision to go with a specific philosophy depends on many factors, including risk management, yield response, and existing soil fertility.

The sufficiency approach is most commonly used with all nutrients and is based on targeting the optimum nutrient level. The objective of the sufficiency approach is to maximize net returns on fertilizer investments in the year of application. For fertilizer to show a profit, adding it must produce a yield response great enough to more than offset the costs involved in applying it. This approach to fertilization carries no long-term financial commitment. The objective is to turn a profit to fertilization in one crop season.

“For this reason, it is a good approach in the case of P and K on land that is leased for very short terms or when cash flow is limited and no capital exists for longer-term financial investments,” Karamanos says.

The build and maintenance approach seeks to build and maintain soil tests to levels above the critical level in an attempt to remove the nutrient as a yield-limiting factor. This is accomplished by adding more nutrients than crops remove, and eliminates any potential of a nutrient deficiency becoming a yield-limiting factor. The strategy is most often used with P fertilizer, especially now that oilseeds are in crop rotations more frequently. Oilseeds are heavy users of P, and P fertility on the Prairies is being drawn down, requiring higher P fertilization in non-oilseed years. To build soil P by one pound per acre requires six to 14 pounds P2O5 per acre. This is not a good strategy for mobile nutrients like N and S, which can leach from the soil.

“This long-term view is best on land that is owned or under a long-term lease and where cash flow is sufficient to sustain the initial capital investments,” Karamanos says.

He sums up by reinforcing the key factor to remember about soil testing: all steps in the process need to be assessed for relevancy on your own farm.