Although biological processes slow down in winter, there is still a significant amount of nitrification and denitrification taking place in the soil, says Martin Chantigny, a researcher with AAFC in Quebec City who has been spearheading research that aims to quantify the amount of nitrogen lost following liquid manure application. Nitrification is the key process leading to nitrate leaching into drainage water while denitrification results in greenhouse gas emissions, he explains.

He says researchers were surprised to discover 20 to 70 per cent of total annual nitrogen losses were occurring through leaching and denitrification during the non-growing season. The amount of nitrogen lost varied depending on factors such as temperature and snowfall.

In the past, it was thought that biological processes in the soil were negligible below 5 C, explains Chantigny. However, his research has shown that soil bacteria continue to be active down to soil temperatures as low as -2 C in sandy soils. Even more surprising, in clay soils, denitrification didn’t stop until soil temperature dipped to -6 C.

“Microbial processes are slower but it is a long time without a crop growing, five to six months, so there is still time for transformations to occur,” Chantigny says. “This is a problem for the farmer as well as the environment. We want the nitrogen to stay in the soil for the next crop.”

To determine if the effect occurred in other areas of Canada, similar experiments were conducted at several different sites across the country. Although the patterns were slightly different, the research showed that overall nitrogen losses were similar regardless of the location.
The next step in the research is to determine management practices that would prevent nitrogen losses. Chantigny is currently studying the effects of manure application timing and nitrification inhibitors. Nitrification inhibitors have been used successfully in spring and summer so Chantigny is hopeful they will be effective for fall application but admits it’s too early in his research for him to draw any conclusions.

Cover crops could also be used to capture nitrogen during the non-growing season in annual cropping systems. “If a producer can establish a cover crop, that is probably the best way to collect the residual nitrogen…in the organic matter of the crop,” Chantigny says. The challenge is to be able to establish a cover crop following corn and soybeans. However, Chantigny points to a growing number of Quebec producers who have successfully established an inter-row cover crop of rye grass in corn which flourishes once the corn is harvested.

Timing the application of nitrogen more closely to when the growing crop can use it is another approach for reducing nitrogen losses. A spring or in-crop application would result in less nitrogen loss, Chantigny says. As a result of this research, farmers in Quebec may apply no more than a third of the liquid manure to be applied annually in the fall. The remainder must be applied in spring and summer.

Looking to the future, the researchers wanted to determine how climate change would impact the loss of nitrogen during the non-growing season. Climate change models predict there will be less snow cover, which would result in colder soils since snow acts as an insulating blanket, explains Claudia Goyer with AAFC in Fredericton, N.B.

Goyer set up a trial to compare nitrous oxide emissions under different snow cover conditions. Nitrous oxide is a greenhouse gas produced by the denitrifying bacteria in the soil that is 300 times more potent than carbon dioxide. Emissions from the breakdown of manure and fertilizer in the soil are the major sources of nitrous oxide from human activities.

A snow fence was used to capture more snow on one set of plots while snow was removed from the “no snow” plots. Natural or “ambient” snowfall made up the third treatment.

These results suggest that in the plots where the snow was removed, the soil was frozen more deeply, which resulted in a release of nutrients from the breaking of soil aggregates, says Goyer. This increase in nutrients stimulates the cold-adapted denitrifier bacterial communities, which, in turn, increases nitrous oxide emissions.

This research is continuing to further explore a variety of agricultural practices that could help reduce nutrient losses over the winter. 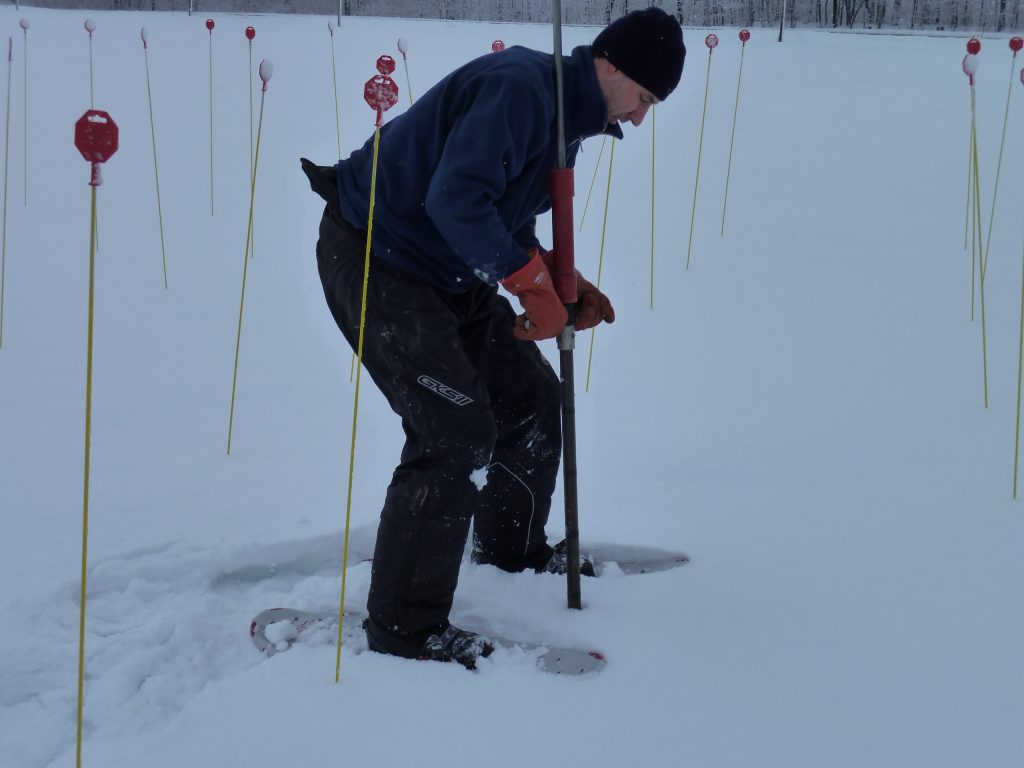