If research and development stays on track, farmers could experience barcoding when it comes to spraying for weeds.

Researchers at the University of Guelph have been working hard for the last 12 years to generate “Barcodes of Life” and recently, they’ve turned their attention to weed species. It’s called the Weed Barcode of Life project (Weed-BOL) and Steven Newmaster is one of the lead researchers working on the project.

“My expertise is plant taxonomy and weeds are one of the toughest groups,” he explains. “We built a DNA sequence library for all the weeds in Ontario so we can have all the genetic variability, and we are very confident that if you have some unknown material, then match it to our library, you’ll get a good answer.”

The original idea for developing DNA barcoding systems was initially proposed by Newmaster’s colleague, Paul Hebert, back in 2003. His work was originally based on finding a short gene sequence at one standard location in the genome to identify different species but unfortunately that method doesn’t work on land plants. Newmaster’s research revealed that the chance of finding another equally accurate gene sequence at one location in the relatively more complicated genomes of plants would be slim. So his team worked to develop a system that relies on one standard gene sequence location combined with a secondary region to produce a barcode for plants. In his research paper, Newmaster writes that traditional taxonomic practices are no longer capable of meeting growing needs for accurate and accessible information with millions of species still unknown and unnamed by the Linnaean system.

Closer to home, Mike Cowbrough, Ontario Ministry of Agriculture, Food and Rural Affairs (OMAFRA) weed specialist, supports Newmaster’s assessment with his own example of how this impacts the agriculture industry.

“Everyone’s on the lookout for Palmer amaranth and there’s been a lot of false positives,” he says. The genetic library, now maintained at the university, makes it possible to analyze suspicious plants conclusively using a quick DNA test, but Cowbrough thinks it would be great to have it right in the field for these cases someday.

Newmaster says what Cowbrough is envisioning is actually very attainable. Although they’ve had difficulty securing the funding to develop these tools, he says the machine they’re currently using to test samples could be made into a jet printer-sized version, costing perhaps $10,000, which could be centrally located for farmers to use at experimental farms or grain facilities. He says it could be built in the next five years, and a sample run on the machine would cost farmers maybe a dollar rather than the $30 it costs to submit samples to the university right now.

Newmaster says the next step after that would be to design probes that worked as a cellphone attachment or even directly on field equipment, but that might be 10 years in the making. Probe development will also depend on the adoption and popularity of current ID services. If they find hay producers make the most use of sampling to provide quality assurance to customers or test for fillers in uncertified seed purchases or ensure a pasture is free of noxious weeds, they’ll focus on developing technologies for these purposes. But if farmers start testing the wheat seed they’re overwintering or elevators want to check how clean canola samples really are, then they’ll focus on these markets instead. Newmaster says they’ve already assumed farmers will want quantitative estimates from these samples, not just the current listing of DNA material found. Cowbrough says developing accurate procedures for this is a process in itself.

The other technology Cowbrough thinks farmers will also be interested in is identifying resistant weeds. Thanks to work by Francois Tardif, he says they now know how to identify the genetic mutation that lends weeds resistance to Group 2 herbicides but glyphosate resistance hasn’t been linked to any amino acid sequences yet. Cowbrough says it shouldn’t be long before they know how to develop probe technology to identify this too. Newmaster says he’s also working on this area with a group of researchers based in Australia who are very interested in DNA barcoding technology.

“As we capture the data and start to identify glyphosate resistance in species, we also want to be able to map it and have that data available for farmers to see,” he says. “I’m hoping there will be a desire to share data that way, so we can alert farmers.” 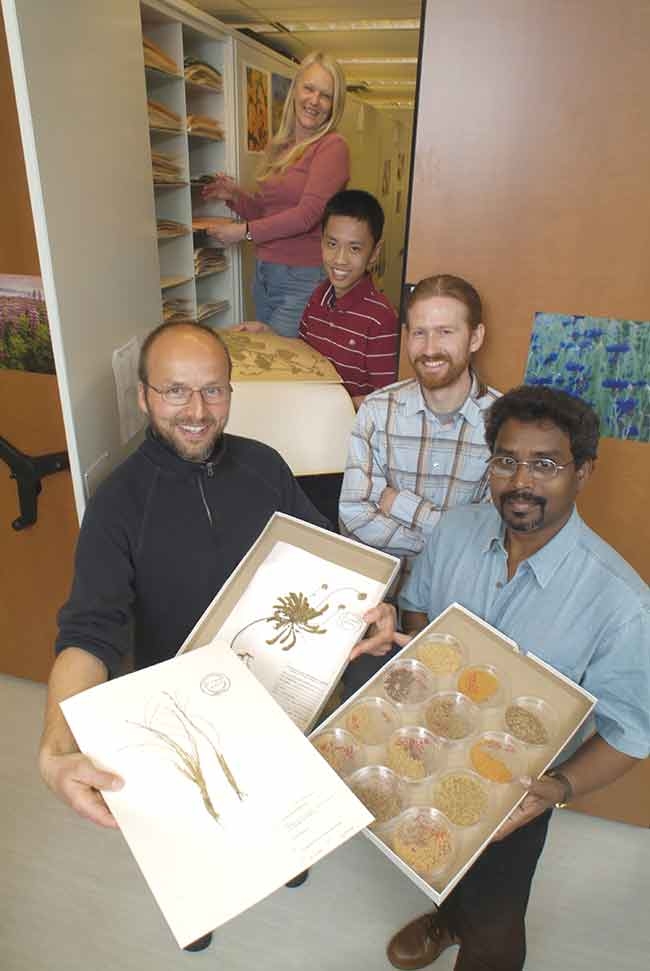 Building a genetic library takes time. The original herbarium team which first started to tackle the daunting task in 2010 included (l-r): Steven Newmaster If research and development stays on track