Features Soil Tillage
Soil health: To till or not to till?

That’s not necessarily the right question. 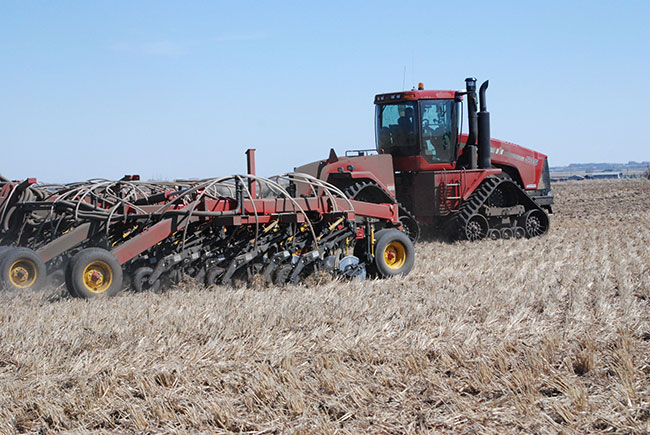 ABOVE: A diverse crop rotation is an important factor in soil health, with or without tillage. Photo courtesy of BRUCE BARKER.

In Western Canada, the long-standing belief is that no-till makes the healthiest soil, as measured by soil organic carbon and the health of soil microbes. But can reduced-till soils also be healthy?

“In drier areas, the advantage of no-till in conserving soil moisture has allowed the move to continuous cropping, and that means more carbon added to the soil. But how much tillage is too much has never been assessed in a diverse crop system in Western Canada,” says Martin Entz, professor of cropping systems and natural systems agriculture in the department of plant science at the University of Manitoba. “What we do know is that [tilled land] doesn’t necessarily mean poorer soil. Plus, tillage takes many different forms. Little things, such as tillage speed, can make a big difference.”

A contributing factor when looking at soil health is geography. In Eastern Canada, tillage without diverse crop rotations is contributing to a decline in soil health. There, a corn-soybean rotation is common. At the University of Guelph’s Elora Research Station, a long-term rotational study was set up in 1980 to compare the interaction of crop rotation and tillage. To date, the rotational study has found that a corn-soybean rotation is associated with reduced yield and greater yield instability, the lowest soil organic matter, and increased nitrogen inputs – with no difference between conventional tillage and no-till. However, diversifying the rotation to include winter wheat, or winter wheat plus a red clover cover crop, resulted in more sequestered carbon, even with conventional tillage.

“No-till can be a good option for improving soil health; however, I would argue that crop diversity is more important. My take-home message is that crop diversity directly improves soil health, and is also required for no-till/reduced-till systems to be most effective,” says Bill Deen, associate professor, cropping systems, at the University of Guelph. “It has also been observed in Ontario that simple rotations are leading to increased adoption of tillage. So, without crop diversity, a farmer may end up forgoing the benefits of no-till.”

On the Prairies, the move is also towards a simple crop rotation of canola-wheat. Whether this is sustainable from a soil health perspective is yet to be seen.

“If you look at the Prairies, the Dark Brown and Brown soil zones, no-till helps alleviate the problems caused by monoculture cropping,” Entz says. “But there is also research that shows the benefits of no-till are stronger in diverse rotations.”

For example, a three-year cropping sequence study, repeated for five cycles in Saskatchewan from 2005 to 2011, found that a cereal-pulse-cereal rotation increased total grain production by 35.5 per cent in year three, improved protein yield by 50.9 per cent and enhanced fertilizer-N use efficiency by 33 per cent over a conventional wheat-summerfallow system.

Entz says there is no comparable long-term study comparing no-till with different types of tillage in diverse crop rotations on the Prairies. However, he says there are many no-till studies that show that the combination of a diverse crop rotation together with no-till has produced the best overall results in terms of soil C dynamics.

“The story in Ontario is that a diversity of plants in the system is more important than simply cessation of tillage. Does this also happen in the grassland soils of the Prairies? This is what researchers are now trying to find out,” Entz says.

Microbial Carbon Use Efficiency could compensate for tillage
One measure of the ability of soils to sequester C is microbial Carbon Use Efficiency (CUE). This refers to how efficiently soil microbes process C (straw, manure, etc.) added to the soil. A higher CUE may increase C storage and explain how a system that receives less C (tillage) can actually have more soil C sequestered than systems that receive more C (no-till).

Cynthia Kallenbach of McGill University conducted research comparing organic and conventional wheat-corn in Michigan. Both treatments received tillage, but the organic treatment had more tillage for weed management, no compost or other organic inputs, and slightly lower plant inputs than the conventional system. She was intrigued to find that the organic treatment accumulated more C, and she reasoned that this was partly due to higher CUE offsetting the potential C loss typically associated with higher tillage.

She points out that reducing tillage may have some contradictions. On the one hand, tillage reduction “could create a more heterogeneous environment with potentially positive effects on CUE via improved aggregation and increased pore size diversity.” And leaving crop residue on the soil surface could concentrate higher CUE near the soil surface.

On the other hand, incorporating crop residue with tillage could improve CUE deeper in the soil. Some research has found that CUE increases with depth under conventional tillage but declines deeper in the soil profile with reduced tillage.

While there are multiple benefits to reducing tillage, Kallenbach proposes that declines in CUE with depth are greater under no-till systems and might explain why overall increases in soil C [with no-till] are not always observed. She doesn’t suggest to increase tillage, but believes that understanding tillage effects on crop residues may involve underappreciated, complex microbial mechanisms, and that tillage may have benefits to improving CUE at greater soil depths.

Kallenbach thinks that diversifying crop rotations or mixing legume cover crop biomass with corn or wheat residues could also promote different soil microbe species to coexist. This diversity of crop rotation can help each species to “realize their optimum CUE without shifting toward an overabundance of inefficient microbes.”

While CUE is an evolving field with much to learn about how it impacts C sequestration, research by Byron Irvine at Agriculture and Agri-Food Canada found that an occasional tillage operation on long-term no-till fields isn’t the end of the world. He found soil aggregate size was reduced by a one-time tillage operation, but there was little or no impact on soil carbon, nitrogen, bulk density, potentially mineralizable nitrogen or any other soil property measured. In the years after tillage, aggregate size began to return to the pre-tillage size.

Overall, the point isn’t whether tillage or no-till is good or bad for soil health in Western Canada. The point is that crop diversity is very important for sequestering C into the soil. In Western Canada, the research hasn’t been done to understand how much tillage and of what type is too much.

“In Western Canada, I applaud farmers on their adoption of no-till and its impact on soil health. The question is how to advance soil health further,” Entz says. “Prairie farmers are on the right track, but there are other tools like diverse crop rotations, perennials and cover crops that could help even more.”