The boys and their toys are changing down on the farm, for good reason, according to Ontario dairy farmer and social media consultant Andrew Campbell.

When they were coming on the market a decade ago, a lot of farmers thought they’d never need cellphones. Now, some can’t be found without the cellphone or its successor, the smartphone. This year, Cambell thinks it’s likely that Twitter on the farm will be even hotter.

The smartphone was new two years ago, and “almost nobody” had it when Campbell asked who was using it a few years ago. “Most were thinking, I have zero use for this. It’s another expensive piece of technology that I don’t need,” he says.

During Manitoba Ag Days in Brandon this past January, about a third of the audience raised their hands to the question. “At least a third of farmers have smartphones today and that’s expected to be half by the end of 2012,” adds Campbell. “At meetings already, at least half have smartphones now.”

Smartphone benefits for farming have ramped up very fast. The first BlackBerry units offered e-mail with a cellular phone. Now, it’s much more – and there are three major “platforms” competing for the market. The three platforms do very similar things, but they don’t necessarily work together very well.

The platforms are BlackBerry, iPhone and Android. The Android smartphone is generic in that it is open for companies to develop their own versions. It includes makers like Samsung, Motorola and HTC. BlackBerry was first, and has more users in the farm market, but that’s also changing.

Any one of these features can more than pay for the investment: instant weather updates; live market prices for grains; instant ability for video and photography; GPS mapping services; ability to download information from the Internet; ability to upload information with e-mail.

“You have a full keyboard now to be sending messages to partners and employees,” says Campbell. “You can pull up the price of grain on your phone in the middle of the day, and probably pay for that device for the entire year. Now you carry an HD video camera in your pocket; it’s almost unbelievable what you can do with this. That’s why this has come so quickly. Before long, every farmer will have one.”

Like an equipment dealer, the service provider is more important than the phone. Before buying one, be sure the phone will have service where you need it. High-speed cellular service is expanding as fast as the smartphone market, but it isn’t everywhere for every company and every phone.

Campbell describes the smartphone as an electronic farming tool, like a knife, pliers or a wrench. It’s important, highly useful and replaceable. “They don’t last long; they become outdated, mine don’t live that long,” he says. “When you get a smartphone, assume that in two or three years you’re going to change it. Service providers subsidize that phone pretty heavily so, if you break a contract after they give you a $400 phone, the most you stand to lose probably is $400.”

One good thing to do before signing a contract is to consult with any partners, family or friends involved in the farming operation. It’s easier to share information if the group is using one type of platform.

As dairy farmers, Campbell and his three partners decided to use an Android platform. It was a tough decision. For them, the right choice turned out to be Android when they heard about a dairy application that was being released for the Android platform.

“I wish there was an applications store for farming,” he says. “Industry has been blindsided by the rate of adoption, to this point. I think the next big step will be in applications that farmers are going to use every single day to run their farms.”

YouTube is the home for video, including video that is directly useful for farming. For the skeptic, he suggests trying a couple of searches on YouTube.

“Type ‘how to…’ and then whatever you have a problem with. You’d be amazed by the results that come up,” says Campbell. “I’ve seen a lot of videos from equipment dealers, showing how to fix a piece of equipment, or set it up, or doing a demo. You don’t need to fly to Georgia to see something you may want for the farm.”

YouTube is a two-way street in that if you have HD video on a smartphone, it also can be uploaded easily to YouTube to share with others. “Post your video so other producers can see the pros and cons of that piece of equipment. You can help other producers make more informed decisions. Videos have a pretty important role to play in farming.”

Facebook is less useful but can be very helpful as a tool for farmers who are trying to connect with consumers. It’s estimated that half of the 800 million Facebook members check in every day. “If you’re trying to sell to consumers, or just want to raise awareness about your product or about an issue, Facebook is a critical tool today,” notes Campbell.

However, Facebook can also be overwhelming by providing too much information, and too much advertising. Probably it’s less effective for a farm business than either YouTube or Twitter.

The power of Twitter is that messages are limited to 140 characters, making them too short for advertising. It’s easy to scroll through dozens of new messages in a couple minutes, getting quick updates on anything from train wrecks to rain that’s falling a few miles west. Often, the messages contain a link to more information.

Campbell once posted a question, asking for experience about using bagged silage. “I got dozens of responses about things to keep in mind,” he says. “They were very positive, but a couple said it’s critical to put it on a cement foundation and critical to check it every couple weeks to tape over any holes you find. So now if we do go that route, we’ll be about two years ahead on the learning curve.”

It takes about two minutes to set up a Twitter account, by going to www.twitter.com. You enter a user name, personal name and e-mail address. After that, the new member decides which other members’ tweets to follow, and Twitter helps with that by making suggestions. 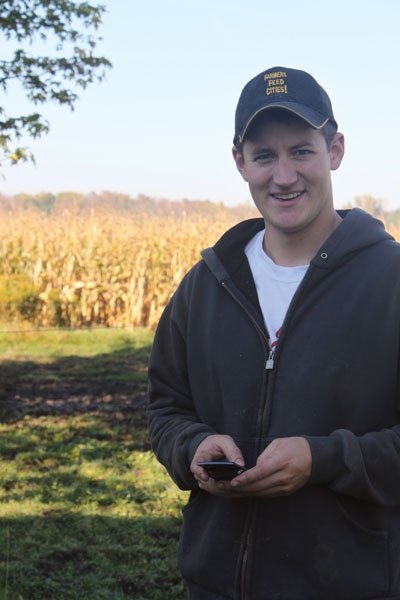 Andrew Campbell has over 4000 Twitter followers. New technology proving useful to many farmers.
Print this page