Barley fibre helps lower cholesterol. That health claim, approved by Health Canada in 2012, is good news for Canadians, since about 40 percent of adults between the ages of 20 and 79 have unhealthy cholesterol levels. And, if the health claim inspires consumers to demand food barley, then it will also be good news for food barley growers and processors.

Although the health benefits of various foods are often talked about, to have a health claim officially approved by an agency like Health Canada is a rigorous, science-based process.

Development of the barley health claim was led by Dr. Nancy Ames, a food scientist with Agriculture and Agri-Food Canada (AAFC), with input from many stakeholders. She started working on barley as a healthful food about 15 years ago, using some of the varieties that were being developed by the Crop Development Centre (CDC) at the University of Saskatchewan and AAFC at the Brandon Research Centre. Over the next decade, Ames and her lab analyzed the food properties of different barley varieties, and created a wide range of tasty products, where barley enhanced the product’s nutrition and function for parameters such as dough performance and baking performance.

But food companies and consumers still weren’t very interested in food barley. Ames thought a health claim might help spark their interest. She had provided some information for a barley health claim in the United States, which was approved in 2006. That claim was based on the benefits of beta-glucan, a type of soluble fibre, in lowering cholesterol. Several other countries had also approved similar health claims.

So in 2007, Ames invited a large group of barley stakeholders, including breeders, growers, processors, food scientists, nutritionists and others, to discuss the idea of a Canadian barley health claim. Although there were studies indicating various other health benefits from barley, the scientifically strongest information was for the role of barley beta-glucan in lowering cholesterol. All the stakeholders supported the idea, and Ames and her lab began the detailed process of preparing a health claim.

“We reviewed the articles systematically to select those studies that would give the most scientifically valid information and that met Health Canada’s criteria,” says Ames. “For example, Health Canada would only consider human trials, not animal trials, and the trials had to involve enough participants, and to measure beta-glucan in the proper way – all of those types of details. Then we did a statistical analysis of the studies that met the criteria.” In addition, she obtained input from nutritionists and chemists on some of the information coming out of the analysis.

The submission also identified some gaps in the scientific information. “That’s very important because as objective scientists, we want to make sure we find the truth,” notes Ames. So even after the claim was submitted, she continued to do research to fill those gaps.

The Alberta Barley Commission, as a representative of the barley industry, submitted the health claim to Health Canada in February 2009. In July 2012, Health Canada approved it. According to Health Canada, consumption of at least three grams of barley beta-glucan per day helps reduce cholesterol, which is a risk factor for heart disease.

High beta-glucan barley varieties suited to western Canadian conditions have been developed thanks to breeders like Dr. Brian Rossnagel, professor emeritus at the University of Saskatchewan and a distinguished barley and oat breeder.

Both barley and oats contain beta-glucan, whereas wheat contains almost none, and corn and rice have none at all. In oats, beta-glucan is found mainly in the grain’s outer portion, but in barley it is distributed uniformly through the grain, so processors can use various portions of the kernel and still have a high amount of beta-glucan in their product.
Rossnagel saw the potential importance of barley beta-glucan not long after he started at the CDC. “In the early 1980s, the [health] information about the beta-glucan in oats was becoming dominant in the research community,” he notes. “From our work to lower beta-glucan in hulless barley for feed purposes, I knew that we could also raise the beta-glucan in barley even more easily than in oats.”

The CDC has released five high beta-glucan varieties so far. Current varieties include CDC Fibar, CDC Rattan and CDC Hilose. These three varieties also offer a range of starch characteristics to suit the needs of food manufacturers.
Barley has two types of starch: amylose and amylopectin. Their relative proportions influence the grain’s functional and nutritional qualities. For example, a higher amylose content leads to higher levels of “resistant starch,” which may help reduce glycemic response, an important factor in the control of diabetes.

Rossnagel notes the CDC has “several other food barley varieties on the way – if there is a market for it. At this point there is no market for the product.” However, he is hopeful that will change.

The health claim and the work that such people as Nancy Ames, Marta Izydorczyk at the Canadian Grain Commission and Linda Malcolmson at Canadian International Grains Institute have done on barley nutrition over the past two decades should be an incentive for food companies to take a closer look at food barley, notes Rossnagel. He also sees another factor that could help.

“When the Canadian Wheat Board was the sole marketing agency for barley, the paperwork and regulatory burden made it very difficult for small companies to grow a small amount of a food barley and process it for use by a local baker, for instance. Now they don’t have that impediment,” he says. “So hopefully some smaller operations will be able to [take advantage of such opportunities]. Then if some of them become noticeably successful, the big food companies will look at barley.”

“Quick Cooking Barley is whole-grain hulless barley that has been lightly buffed, cooked and dried so that it is ready in 10 minutes without sacrificing any nutritional benefit,” says Marvin Nakonechny, CEO of Progressive Foods. “It is a healthy, convenient, tasty alternative to rice, pasta and potato.”

Currently, Progressive Foods uses Falcon, a non-waxy, hulless variety, for Quick Cooking Barley. “I’m investigating other non-waxy barleys that have a higher soluble fibre content, and we’re testing them to see how well they work in our processing plant,” notes Nakonechny, adding he thinks using one of the higher beta-glucan varieties could mean that a half-cup serving of Quick Cooking Barley would provide 100 percent of the daily amount of barley beta-glucan required to lower cholesterol.

He believes the health claim will help the food barley industry a great deal, by increasing the interest of health-conscious consumers and by providing information for nutritional educators. He would also like to see Canadian health claims for some of barley’s other benefits, such as its effect on lowering glycemic response.

For consumers, barley offers more than beta-glucan fibre; for example, it has a high level of vitamin E, antioxidant components, and other important types of dietary fibre. “Barley has a good complement of vitamins and minerals that make it a pretty well-rounded food,” says Ames.

Researchers are continuing to evaluate barley’s other health effects. For example, Ames is conducting clinical trials on the role of barley in lowering glycemic response and in providing a sense of fullness after eating, which helps with weight control. The results so far look promising.

As well, Ames and others have developed various food barley processes and recipes to encourage consumers and companies to consider barley. “You can puff it, bake it and make all sorts of things from it,” she notes. “We developed a retort product [an instant whole-grain product]. We’ve got barley tortillas, tortilla chips, pitas and cookies. Barley goes beautifully in bannock, and I have a delicious waffle recipe – waffles are really dull until you have these barley waffles.”

Ames is currently using the health claim as a way to help people learn about food barley. For instance, she is talking to dietitians about the health claim, and she has developed recipes specific to the health claim so people can easily obtain their daily three grams of barley beta-glucan.

Despite all these efforts, growing the food barley industry remains a challenge. “We still have some mountains to climb,” says Ames. “Our hope has always been to let consumers know about and have the opportunity to utilize barley for its nutritional and sensory properties. I’m not sure yet if the health claim is helping towards that. If we can just get consumers to realize that barley has a lot to offer them, the rest will fall into place.” 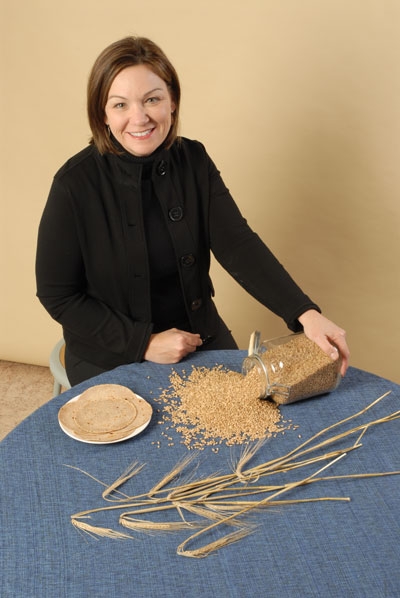