Morse manages 2500 acres with heavy clay-loam soil in the northern Red River valley. His major crops are soybeans and winter wheat, but he also grows a bit of corn, oats and canola.

He’s one of a small percentage in Manitoba who grow non-GMO soybeans. “If you grow a non-GMO bean, you need all the tools you can get to have your fields as clean as possible,” says Morse. “I have all the traditional weeds – volunteer canola, mustard, buckwheat, lady’s-thumb and other weeds. I have Odyssey and Viper to spray on the non-GMO beans, but I needed more help.”

Morse got a sample jug of a new product, Valtera, in 2010. He used more in 2011, when Valtera was registered, and used it on every acre that he could in 2012. “I seed my beans, then I tank mix Valtera with my glyphosate and put it on before the beans come up,” he says. “It doesn’t need to be incorporated, and it gives me 30-50 days of control of broadleaf weeds. The glyphosate burns everything off the top. The Valtera takes care of not only the broadleaf weeds such as pigweed, nightshade, lamb’s-quarters and common ragweed on the label, but others as well as volunteer canola.”

Volunteer canola control in non-GMO soybeans was the biggest selling point, according to Morse. “I don’t really have any volunteer canola now,” he says. “I have a few crops that, driving by, you’d think must be GMO soybeans because of how clean they are. That’s very pleasing.”

Valtera was developed by Japanese firm Sumitomo Chemical Company Ltd. Soybean growers in South America began using it in the 1980s. It became available for US soybean growers about 12 years ago. In March 2011, Nufarm Agriculture became the Canadian sales agent for Valtera herbicide.

The active ingredient is flumioxazin, a Group 14 product that controls Group 2, Group 5 and glyphosate-resistant weeds. It can be applied alone or mixed into a tank with a burnoff chemical.

Currently, Valtera is registered for control of Eastern black nightshade, lamb’s-quarters, pigweeds and seedling dandelion in Roundup Ready and IP soybeans in Canada.

“We’re very happy with the first-year launch,” says Myles Robinson, provincial sales manager with Nufarm. “Valtera is not going to get rid of every volunteer canola plant on your field, but it will certainly get rid of a very high percentage. It isn’t on our label, but we saw some really good activity on all types of volunteer canola this summer.

“The U.S. label lists a lot more weeds, including kochia and volunteer canola. We are going to try to add some of those weeds to our label in Canada,” he adds. “It’s fair to assume that if it controls kochia in North Dakota, then it will probably do the same thing here.”

Valtera will stay on the surface and remain inactive until it is activated by rainfall. It requires about a quarter-inch of rain, or one good shower, if it is directly on the soil surface. If it is on heavy trash cover, it may require a half-inch of rain to wash it off the trash and into the soil. Once it is active, it controls emerging weeds for four to seven weeks.

Valtera can be mixed in the tank with a burn-off product such as glyphosate for one-pass burnoff and residual weed control. Robinson expects many growers will take that option.

Valtera’s activity in the early growing season also reduces pressure for in-crop treatments with glyphosate on RR soybeans. “You’re not rushing to put a glyphosate application on and making ruts because you have to get out there today,” says Robinson. “That’s a bit of time management optimization.”

It also doesn’t have any re-cropping restrictions. “We’re looking at about $13.25 an acre at our 40-acre rate,” says Robinson. “As a cost per day for weed control – you get up to 50 days of residual weed control – it’s very cost-effective.” 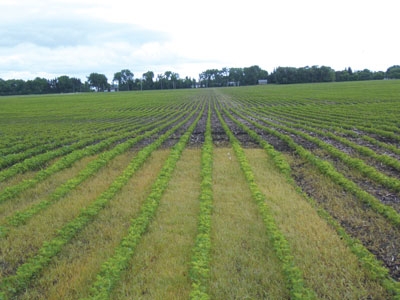 The yellow foxtail is the Valtera check in the front; the back is the Valtera treatment at 40 ac/jug New product offers weed control options for non-GMO crops.