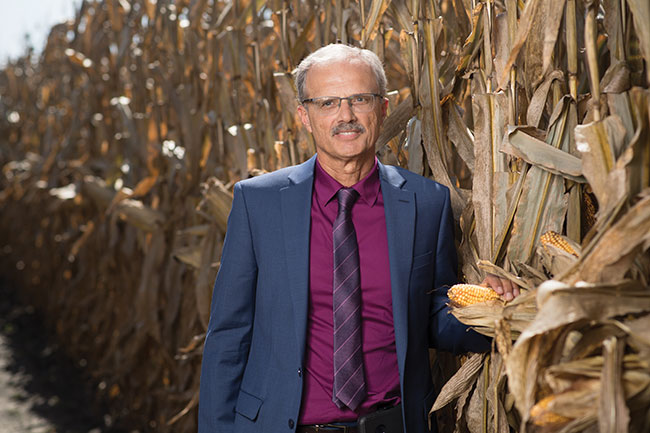 Increasing corn yields isn’t just about planting more plants or growing more kernels per ear of corn. It’s also about making sure each kernel of corn is the biggest it can be.

“In the past, we achieved higher yield by focusing on higher plant densities,” says Dr. Tony Vyn, a professor of agronomy at Purdue University in Indiana. “At today’s plant densities, yield gain is achieved more by increasing kernel weight.”

Modern hybrids, while producing slightly less kernels per plant at the much higher plant densities than was common 30 or 50 years ago, produce bigger kernels as one part of the equation to increasing corn yields. Vyn also recommends focusing on an incremental approach to the integrated management of nutrients and tillage to achieve bigger kernels of corn.

To increase this growth-filling period, growers need to grow healthy plants to meet the kernel needs from ongoing photosynthesis and new nitrogen and phosphorus uptake. The alternative is for corn plants to re-mobilize nitrogen from their leaves and other plant parts to meet kernel needs. However, this decreases yield potential.

With proper management, growers can ensure the corn plants meet their nitrogen needs from the soil rather than re-mobilizing it from the plant. This will make the corn leaf solar panels work longer, extending the grain-filling period and resulting in bigger corn kernels.

Managing nutrients
The way to get there, besides planting corn with good, stay-green potential, low disease risk and any warranted fungicide application, is to work with your nutrient management program so the plants have adequate nitrogen and phosphorus. Vyn recommends growers consider a late-season nitrogen application for a portion of their nitrogen input.

“At the V12 stage, provide the last 30 to 40 pounds per acre and keep phosphorus available because, at the end, grains will accumulate over 80 per cent of total plant phosphorus,” he says. “I am not recommending in-season phosphorus application, but high initial levels of both nitrogen and phosphorus in early grain fill are important to meet the objective of high kernel weight.”

Vyn expects the average Ontario farmer is meeting their phosphorus needs through pre-plant and starter applications. “There is more starter fertilizer used today in Ontario than used across the central Corn Belt because Ontario farmers realize it’s an effective strategy,” he says.

With 50 per cent of total phosphorus going into the corn plant after silk emergence, Vyn says banded phosphorus application is able to meet the needs of early season roots relying on the soil. He recommends growers err on the side of practical nutrient management and make decisions about phosphorus management based on season-long availability, taking into account issues like cold temperature stress early in the season and warm nights later in the season.

Keep it cool
“You can’t do anything about air temperatures, but there can be challenges for achieving kernel weight because hot nights are going to respire more sugars away,” Vyn says. “Warm nights cut the linear period of grain fill short and can also limit kernel weight gain per day.”

Generally, effective kernel weight gain only goes as long as 50 days from pollination, although growers would like to have weight gain occur for 60 days. If warm nights occur, growers need to ensure roots are able to access sufficient water to keep leaves cool.

“Water availability is an important part,” he adds. “Soil structure is also important.”

Limit compaction and rotate crops
To this end, limit soil compaction by planting on systems that reduce compaction so roots can go deeper. Strip-tillage systems with automatic guidance controlled traffic result in less compaction below the soil where seeds are placed. Vyn recommends strip-till or minimum-till practices combined with nutrient banding to ensure consistent nutrient availability for all plants.

“I am a promoter of systems with more consistency in soil physical structure and soil nutrient availability so every plant in a high-density system has equal access to water and nutrients,” Vyn says. “These practices together will provide more uniform nutrient distribution.”

He also stresses the importance of crop rotation.

“Crop rotation is more important in times of stress conditions during the growing season,” he explains. “Corn yields are five to 10 per cent higher following soybean and require less nitrogen than following a corn rotation.”

Growers are also doing well if they regularly include winter wheat in their rotations.

“You do not grow consistently big corn in a continuous corn practice,” Vyn says. “You can’t get around it by applying more nitrogen and sticking with it for number of years. Adding wheat helps with subsequent yields in corn-soybean rotations.”

Vyn’s recommendations come from corn hybrid era comparison studies as well as comprehensive reviews of almost a century of corn nutrient uptake research he conducted with former graduate students. Research is now focused on alternate nutrient band placements, pre-season and in-season nutrient applications, and endosperm cell counting and kernel nutrient uptake during grain-fill period to see how deterministic each are to final yields. Other projects involve fall and spring strip-tillage comparisons to no-till and conventional tillage and plant-to-plant uniformity studies.