In theory, in-season fertilizer applications that add just enough but not too much nitrogen can enhance profits, increase nitrogen use efficiency and reduce environmental impacts. In practice, determining the right rate can be challenging. On-the-go sensor-based systems like GreenSeeker offer a way to more accurately estimate rates and to apply those rates as the crop’s nitrogen needs vary across the field.

“One of the major challenges that growers face in managing nitrogen is dealing with variability. There’s variability in space within the field and between fields, and changes in time throughout the growing season, and from one season to another. This is due to variations in landscape characteristics, soil characteristics, weather conditions and grower practices,” says Dr. Olga Walsh, a cropping systems agronomist specializing in precision agriculture at the University of Idaho. “Using this sensor technology helps account for these types of variability, allowing much more informed decisions.”

With these in-field optical sensor systems, growers can fine-tune in-season nitrogen rates based on real-time conditions. For example, growers could replace nitrogen lost to the environment earlier in the growing season, avoid applying extra nitrogen where it’s not needed, and add extra nitrogen if the crop is performing better than expected.

“In North Dakota, we have a problem with nitrogen loss due to leaching during wet years. We have a problem in high clay soils with denitrification, which is gas loss of nitrogen. So side-dress nitrogen is important. But what should you use for a rate? Do you just guess?” says Dr. Dave Franzen, an extension soil specialist at North Dakota State University. “Using these sensors is the most scientific way to make a rate recommendation that we’ve ever had.”

How the sensors work
Examples of these sensors include GreenSeeker, CropSpec, OptRx and Crop Circle. They are called “active” optical sensors because they emit their own light. Franzen says, “The strength of that is that you can use an active optical sensor at midnight or on a cloudy day or on a day that has sun with clouds wafting by. Those are things that interfere with satellite imagery, aerial photography and drone imagery [which all involve ‘passive’ sensors that measure reflected light originally emitted by the sun].”

He explains that the sensors emit their light in coded pulses, similar to the technology of a garage door opener or a television remote. The light code is similar to the UPC black and white lines on most retail packaging, although instead of black and white colours, the bands are different time-lengths of light-on, light-off intervals.

For variable rate fertilizer applications, the sensors are attached in front of the fertilizer applicator unit and are integrated with the application system. The sensors emit specific wavelengths of light onto the crop canopy, and the canopy reflects some of that light back to the sensors. The sensors determine the difference between the emitted and reflected light. The difference is affected by the crop’s health; for example, healthier plants tend to absorb more red light and reflect more near-infrared light.

The sensors do not directly detect nitrogen. “They tell us how much biomass has been produced, which is an overall evaluation of how healthy the plants are,” Walsh explains. “Research shows biomass production is highly correlated with final yield for many crops – wheat, corn and others. So these sensors allow accurate estimation of the crop’s yield potential and how responsive the crop is to nitrogen.”

Most of these sensor systems require a nitrogen-rich strip as a standard for comparison with the rest of the field. “You apply a base rate of nitrogen to the field [at or near planting time], and in addition, you apply a little more nitrogen than you think the crop would need to a small portion of the field, the width of the applicator and maybe 100 feet long. That small area is your nitrogen non-limiting standard,” says Franzen. For example, a grower might apply about 1.5 to two times the recommended rate to create the nitrogen non-limiting area.

For an in-season nitrogen application, the first step is to get a sensor reading of the nitrogen non-limiting area. The average reading for that area is entered into the spray controller. “If the sensor readings in the rest of the field are within about five per cent of the reading in the nitrogen non-limiting area, then there is no need to apply any additional nitrogen,” says Franzen. “If the difference is greater than about five per cent, then the sensor will use a formula to rapidly calculate the nitrogen rate to apply to that part of the field, and it will tell the applicator what to apply.”

These sensor systems can be expensive, so how many sensors do you need? Franzen suggests starting with one sensor. “Dr. Bill Raun from Oklahoma State University, who first introduced this technology, initially developed a system with a sensor and an array of nozzles about every three feet to apply variable rate nitrogen on winter wheat. It freaked people out because it’s a huge step.

“If a person wants to dive into that end of the pool, feel free, but what I am advocating right now is one sensor in front of the applicator controlling the boom. However, 20 years from now, when people have been using this technology for a while and are comfortable with it, I think there will be a sensor for every row,” says Franzen.

The sensors measure the reflectance of both weeds and the crop, so the weed population needs to be low for an accurate estimate of the crop’s nitrogen needs. If a crop has some other problem, like a disease or an insect infestation, the grower could assume the same problem is also affecting the nitrogen-rich area, as a way to simplify the situation. One of Walsh’s graduate students is working on identifying and distinguishing between the effects of nitrogen stress and other stresses, like disease, insect and water stresses, in the sensor readings.

“If that happens, then the grower needs to apply some sulphur as soon as possible and then wait about a week before going back in to do the nitrogen application.”

Algorithms matter
These sensor systems use formulas, or “algorithms,” to convert the information from the sensor readings into nitrogen rates. The algorithms vary depending on such factors as the region, tillage practice, soil texture, crop type and growth stage, and sensor type. An algorithm developed for one region will probably not accurately predict nitrogen rates for a different region.

“Developing these algorithms takes a lot of time and effort,” notes Walsh. For the past 3.5 years, she has been leading a team to develop algorithms for Montana wheat varieties and growing conditions. “The more field locations and the more data you collect, the better your algorithm will be. However, once you’ve done the work, it is easy to convert that knowledge into software. Then it becomes part of the package that comes with the sensor unit or on-the-go variable rate system, so growers can use it right away.”

Franzen recently completed a study to develop algorithms for corn in North Dakota for GreenSeeker and Crop Circle sensors. “One of the basic principles of site-specific agriculture is that it is always site-specific per scale. Even within North Dakota, for just one type of sensor, I have four different algorithms. That is partly because of regional differences: the western part of our state, southwest of the Missouri River, has different soils, different [nitrogen supplying] capability and a different environment than the eastern part,” he says.

“I’ve asked my computer science colleagues to develop a machine learning tool in the next few years, so farmers would use these [regional] algorithms as a starting point and then continually add data from their own farm and gradually morph the original algorithms into algorithms specific to their farm.”

For the Canadian Prairies, the late Dr. Guy Lafond, who was with Agriculture and Agri-Food Canada, and Chris Holzapfel, research manager at the Indian Head Agricultural Research Foundation, worked on GreenSeeker algorithms for spring wheat, durum wheat, canola, malting barley and oat, for the Brown to Dark Brown soil zones and the Thin Black to Black soil zones. The algorithms require the grower to enter the number of growing degree days, using a base temperature of 0 C, from seeding to the day of sensing.

As part of their research studies, Lafond and Holzapfel compared various approaches to nitrogen applications including: applying 100 per cent of the anticipated nitrogen need at seeding; and applying some of the nitrogen at seeding and some as a variable rate application with a GreenSeeker system. Overall, both systems had the same crop yields, but the variable rate/GreenSeeker approach achieved those yields with less nitrogen.

There can be challenges in applying in-season nitrogen in a timely manner, especially if herbicide or fungicide applications need to be made during the same time period. As well, dry conditions after the nitrogen application will delay the availability of the fertilizer to the crop. Lafond’s and Holzapfel’s research indicates that, for the cereal and oilseed crops they studied, at least half to two-thirds of the anticipated nitrogen requirement should be applied at seeding. Growers also need to consider such factors as crop price, fertilizer cost and application cost to decide whether an in-season nitrogen application would make economic sense for their situation.

Walsh says the return on investment for an on-the-go sensor system depends in part on the grower’s objectives. “They might want to decrease the amount of nitrogen they apply to save money on fertilizer. Or they may want to distribute fertilizer inputs more precisely in the field to improve crop yield and quality.”

She notes, “Normally, the initial investments in these sensor-based systems are paid off within one or two growing seasons.”

Franzen expects adoption of this technology in North Dakota to be a gradual process. “Any kind of site-specific movement forward seems to take about 15 years. I’ve seen it with yield monitors and with zone and grid sampling. This sensor technology is the next thing. In about 15 years, it will just be something that people do,” he says.

“We now have several sensors on the market, and more and more people are making some use of them. [And we have algorithms to get growers started with sensor-based nitrogen applications.] It will take some time to get some people’s heads around it, but this is where we need to go with side-dress nitrogen for many of our soils in North Dakota.”

Walsh thinks precision agriculture will eventually become the standard practice for agriculture. “One of the Idaho growers put it very well. He said: ‘Growers who think in terms of sustainability and staying competitive cannot afford not to use this kind of cutting-edge technology.’ Sustainability includes all of the aspects of crop production – maintaining or increasing yield, improving crop quality, sustaining crop productivity and minimizing negative impacts on the environment. The sensors help in all of these aspects.” 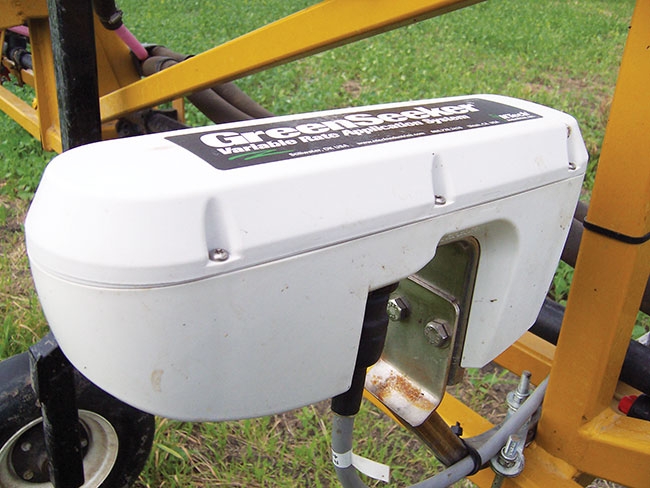