Everyone likes to try to predict yield while the crop is growing in the field. Sometimes it is just human nature to try to guess yield, but there are also valid reasons such as making a reseeding decision on a poor plant stand, or making storage and marketing decisions as the crop nears maturity.

But is it a fool’s game to try to estimate soybean yield? After all, it can be done quite accurately in corn. So why not soybean?

“When estimating yields, you need to know why we are doing it,” says Gary Martens, professor at the University of Manitoba. “For example, if you are estimating yields early in the season, the reason you do it is to establish if there is enough of a plant population to leave the plant stand the way it is; or [if you] should try to start over.”

Early in the season, at the “V” stage of growth before soybean plants pod out, plant population and the current calendar date guide the reseed decision. For soybeans, Manitoba Agriculture, Food and Rural Development (MAFRD) indicates that ideal plant density is between 180,000 to 210,000 plants per acre. However, some growers are achieving high yield with 160,000 and even 120,000 plants per acre.

“That is quite a bit lower than Purdue University estimates for Iowa. Is one right and one wrong? No. I talked to MASC and they say these yield estimates are the ones they recommend for reseed decisions, even though they acknowledge that you will probably have higher yield at the low plant populations,” explains Martens. (See Table 1.)

The other consideration is the current date when soybeans might be reseeded. MASC data shows that as seeding date gets later from the second week in May to the first week in June, yield potential drops off.

“A third thing to take into account is the cost of reseeding. The biggest cost of growing soybeans is the seed. Doing a replant will cost about $100 per acre, so think about whether that is really worth it based on the potential yield that you can get from as little as 20,000 plants per acre,” says Martens. “My gut feel is that very rarely will we replant soybeans. Typically in Manitoba it would be too late to do that.”

Mid-season estimates difficult
After flowering has started and before pods have started to form, a soybean grower may wonder if he should apply a fungicide or other inputs. At the R1 to R3 stage, Martens found that estimating yield is difficult. He says this is reflected in MASC protocol that only estimates yield by either plant stand or seed count after podding.

“I thought it might be interesting if you could estimate soybean yield at this stage by height. I took 16 soybean varieties from Kelburn Farm and looked at height, and you can’t do it. The number of pods is all over the place.”

Martens then wondered if soybean yield could be estimated by counting stems per acre. He counted the number of stems and number of pods on each stem. The variability was very high and he found this tactic wasn’t accurate either. The only valid approach at this stage would be MASC’s method of estimating plant stand and equating that to potential yield.

Martens cautions, though, that accuracy with the yield equation can be compromised. “Seeds per pound is the first big problem. There are huge variations in the size of seed. Thunder, for example, is a very small seed with about 4100 seeds per pound. Many other varieties are in that 2300 to 2500 seeds per pound range,” he says. “Make sure you estimate that based on the variety. But even that can be a problem because you don’t really know what the seed weight will be before harvest.”

Another factor to consider is harvest loss. Worst-case scenarios could be up to 12 per cent seed loss at harvest. After using the equation to determine estimated yield, Martens suggests growers use their own experience to deduct their average harvest loss from the estimated yield.

Field variability is another big factor to consider. MASC recommends seven to eight samples when estimating yield, but that can even be problematic, based on field variability. The possible solution is to estimate yield in each management/yield zone.

“Wow, that is a lot of work and I don’t think many people will do this. Maybe for research, but on commercial farms, I doubt it,” says Martens.

Searching for other solutions
Martens felt there must still be a better, less time consuming way to estimate yield, so he looked at historical yields and rainfall.

“I’ve tried to average all the yields of crops in Manitoba based on rainfall, because I think that is one of the biggest drivers of yield. Everybody, every farmer puts on enough nutrients, they take the weeds out, so there are a lot of standards out there. One of the biggest variables is rainfall. But when I did an average rainfall versus average yield, there was no relationship at all. You have to do relationship of rainfall to yield on a very site-specific basis. You have to do it on a field,” says Martens.

So Martens did it on his father’s field with yield data for wheat for the last 50 years, and developed a formula based on average historical yield and rainfall. He gets 51.8 bushels per acre, minus 2.9 x the rainfall in May minus 2.7 x the rainfall in July.

Of course, there is an app for that, too. An Australian company developed iPaddockYield (www.iPaddock.com.au, available from Apple’s App Store). It uses your own historical rainfall and yield records, and predicts a farm-specific yield forecast based on rainfall to date. 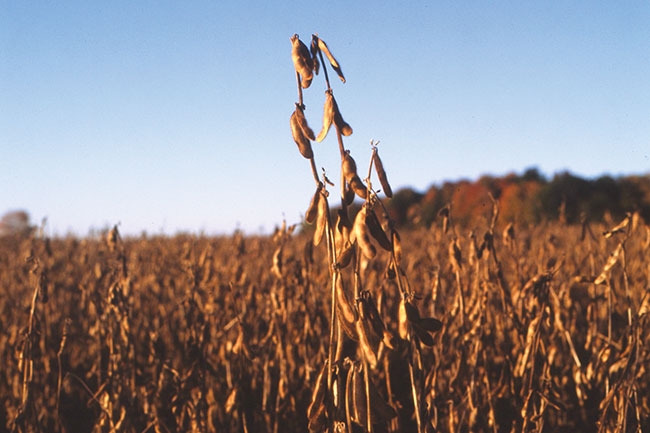 Variability in soybean fields can make yield predictions difficult. Everyone likes to try to predict yield while the crop is growing in the field.