Herbicide-resistant wild mustard can be a big problem in Prairie lentil fields. But a University of Saskatchewan (U of S) study shows you can control these weeds while reducing the risk of creating even more herbicide-resistant weeds.

Weed control in lentils is challenging. The plants are short, slow to grow and slow to close their canopy, so they can have a difficult time outcompeting weeds. Plus lentils are sensitive to many herbicides, so chemical control options are limited. The development of Clearfield lentil varieties, which are tolerant to Group 2 herbicides imazamox and imazethapyr, has allowed effective control of broadleaf weeds. But heavy reliance on Group 2 herbicides has also resulted in Group 2 resistance.

Herbicide-resistant weeds develop when the same mode of action is used again and again, and resistance to Group 2s can develop especially quickly. In Western Canada, Group 2-resistant weeds started to develop shortly after these herbicides became available, with the first confirmed cases in 1988. So far on the Prairies, 19 weed species are known to have Group 2-resistant biotypes.

Group 2-resistant wild mustard is a particularly serious problem for lentil growers. “Driving down the roads in our prime lentil growing areas in Saskatchewan, we see fields where you can’t tell if it’s a lentil field with a wild mustard problem or just a really poor mustard or canola field,” says Colleen Redlick, a graduate student at the U of S who conducted this project. “We felt that there was definitely a need to generate a solution for these producers so they could grow one of their most profitable crops.

The study took place at Scott and Saskatoon from 2011 to 2013. Redlick worked with Dr. Steve Shirtliffe and Dr. Chris Willenborg, her thesis supervisors at the U of S, and Eric Johnson, a weed biologist with Agriculture and Agri-Food Canada, and with the U of S technical staff at Saskatoon and the Western Applied Research Corporation at Scott. Saskatchewan’s Agriculture Development Fund and the Saskatchewan Pulse Growers provided project funding. Redlick also received scholarships from the Western Grains Research Foundation, and Natural Sciences and Engineering Research Council for the project.

The study evaluated the effects on wild mustard biomass and lentil yields of six options for chemical and/or mechanical weed control, and three lentil seeding rates. For the chemical and mechanical treatments, the control treatment was a standard glyphosate burnoff.

The second treatment was glyphosate tank mixed with saflufenacil (Heat), a preplant Group 14 herbicide that can give some control of wild mustard.

The third treatment combined the glyphosate burnoff with the use of a min-till rotary hoe. “Eric Johnson and Steve Shirtliffe had already done some research with the rotary hoe,” explains Redlick. “They found it was a really good fit with our lentil growers’ production systems. You could go up to six passes with the hoe with no reduction in surface crop residues, and the hoe is very capable of going through the residues that no-till lentil growers have on their fields. They also found that you could do two passes with the hoe with no yield decrease, and that you could use the hoe until the eleventh node of the lentil without yield reduction.”

She adds, “The rotary hoe is also a really good fit for this crop and weed combination.” The hoe has little spoons on a spinning wheel and is able to flick out small-seeded weeds that have small root systems and are emerging from shallow soil depths. So rotary hoeing is a good option for dealing with wild mustard seedlings. Lentils are seeded quite a bit deeper so the hoe doesn’t flick out the lentil seeds.

The fourth treatment was the glyphosate burnoff plus a half rate of metribuzin (Sencor, Group 5). “Sencor is the main herbicide option remaining once the Group 2 herbicides stop working; it’s one of the only other herbicides that gives any control of wild mustard in lentil,” notes Redlick. “However, lentil is sensitive to Sencor, and the company recommends splitting a full rate into two half-rate applications. So we tried a half-rate for this treatment.”

The fifth treatment was an integrated treatment, combining glyphosate, saflufenacil, rotary hoeing and a half-rate of metribuzin.

Finally, the sixth treatment was a full herbicide treatment, with glyphosate, saflufenacil and a full-rate of metribuzin (split into the two applications to increase crop safety).

“Steve Shirtliffe and other researchers have shown that increasing crop competition is a really effective means of increasing weed control,” says Redlick. “We also wanted to see how seeding rate interacts with the different herbicide treatments. We know producers favour herbicide treatments so we really need the components in our integrated system to be shown to work with the herbicide.”

Integrated approach works
The study showed that at higher seeding rates, the integrated treatment worked as well as the full herbicide treatment for weed control and lentil yields.

The study’s results indicate the recommended seeding rate of 130 plants per square metre is not high enough for the small and extra small seed classes of lentil. “In almost every treatment, we saw yield increases by doubling the seeding rate to 260. And the higher seeding rate also translated into better economic gains for the producer,” notes Redlick.

When she presented the study results at extension events, Redlick learned many lentil growers are already using more than the recommended seeding rate. “A lot of the producers said they were seeding in pounds per acre, not targeting a plant population. As agronomists, we want our growers to be targeting plant populations because that is a much more precise way of determining your crop’s competitiveness against weeds,” she says. “It turned out that many growers were using between 50 and 70 pounds per acre [likely because they were used to growing larger-seeded lentils, which have seeding rates in this range]. CDC Impala has a 1000-kernel weight of 31 grams, so the growers are actually seeding between 160 and 230 plants per square metre.”

The next step for Shirtliffe’s research group is to further investigate the effect of higher seeding rates on foliar disease, including determining if any increases in disease pressure might translate into downgrading of lentils.

Although the study showed that rotary hoeing helped control weeds, Redlick suspects growers will only adopt the practice if they have no other option for controlling herbicide-resistant weeds. “Most growers prefer to control weeds with herbicides. Coming from the farm, I understand that – you’ve got the application equipment there and so on. But if someone is challenged with resistant weeds, the rotary hoe is relatively cheap to buy and cheap to operate. And you can drive it really fast; we went about 12 kilometres per hour through those fields. So I can see it fitting with our production systems.”

Shirtliffe and Johnson are working on a similar study to assess how effective rotary hoes are for controlling kochia in lentil.

For Redlick, the seeding rate findings from her study are the most important result. “Growers are looking for tank mix solutions to deal with herbicide-resistant weeds, but the answer to herbicide resistance is not just to use different herbicides. Our study showed that multi-tactic weed control can be effective. The solution for these weed control problems is in your seeder tank, not just your sprayer tank, because increasing the seeding rate has a very positive effect [on weed control, yield and profits].” 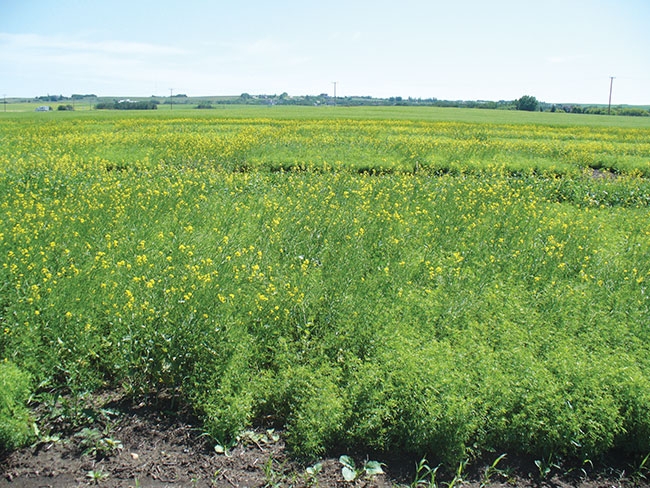