Aug. 15, 2014 - There haven't been many serious insect issues in the past couple of weeks. Wheat midge emergence and infestations were later than most years with many wheat crops not at a susceptible stage for the midge depending on seeding date and region in the province. There were reports of blister beetles in alfalfa and red turnip beetles in canola but these were not widespread.

Although the 2014 Grasshopper Forecast Map indicated low risk for most of Saskatchewan, chemical control of grasshoppers was reported in the southwest and west-central regions in lentil. The economic threshold (ET) for infestations in lentil is lower than in most other crops at only two grasshoppers per square metre. This is because grasshoppers feed primarily on developing pods.

In flax, the ET is also two per square metre and damage usually occurs with the grasshoppers feeding at the base of the green bolls, often resulting in the boll being nipped off. In both these crops the low ET is due to feeding directly on the yield components of the plants rather than vegetative foliage.

In other crops, late season infestations of grasshoppers can be more damaging if feeding occurs directly on yield components. For example, canola is not a preferred crop for grasshoppers and can sustain higher populations if feeding on foliage (ET approximately 12 to 14 hoppers per square metre). However, if feeding is on canola pods the ET should be lowered. In wheat, the ET is about eight to 12 grasshoppers per square metre, but if feeding is on the flag leaf (directly responsible for filling in the head) or the wheat head itself, a lower ET should be considered.

Monitoring of bertha armyworm moths is complete for 2014. The final map indicates greatly reduced risk for most areas of the province compared to the last couple of years. Only one of the nearly 200 traps had moth accumulations higher than 700 this year, with the highest moth counts recorded south of Moose Jaw. Keep in mind that the map is only an indicator of potential problems. In-field monitoring for the armyworm larvae is key in determining actual densities and threat to the canola.

As harvest nears, it is critical to consider pre-harvest intervals (PHI) if any pesticide is to be applied to a crop. All insecticides, fungicides and herbicides have a PHI associated with the product. The PHI refers to the number of days that the crop should NOT be harvested after application of a pesticide. Harvest in this context means cutting or swathing. If the crop is harvested before the indicated interval has elapsed, there could be unsafe or unacceptable residues of the pesticide remaining in or on the harvested seeds. Excess residue of pesticides can affect commodities destined for export. PHIs are listed on product labels and are also included in Saskatchewan Agriculture's Guide to Crop Protection under the 'Restrictions' section of individual product descriptions. Ensure that the product is registered for the intended use for the crop at the time and stage of application. 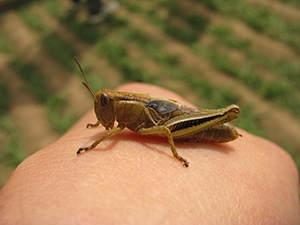 The two-striped grasshopper is one of four main pest species on the prairies. There haven't been many serious insect issues in Saskatchewan this year.