From early diamondback moth to the aster leafhopper that transmitted aster yellows disease, which impacted many crops on the Prairies, 2012 was nothing normal. How does that bode for 2013? Here’s a look back with an eye to 2013 predictions.

Pests of all crops
Cutworms were a problem in many field crops in 2012. A few canola fields in western Manitoba had areas reseeded because of cutworm feeding, and insecticides were applied to control cutworms in quite a few fields in June. Some cutworm damage to corn was reported in the eastern and central regions of Manitoba.

In Saskatchewan, populations appeared to decline from 2012, although there were still some significant infestations. They were not a common problem in Alberta, although they showed up in damaging numbers in a few locations in southern Alberta.

Some damage from wireworms was observed in different areas of Manitoba. In Alberta, there were fewer reports of poor insecticide performance from growers using seed treatments.

High levels of aster leafhoppers were present in many fields, beginning about mid-May. The number of canola plants showing visible symptoms of aster yellows was overall much higher than normal across the Prairies in 2012, and in some fields likely caused significant yield loss. Because the insect blows in from the south and does not overwinter well on the Prairies, the risk of aster yellows in 2013 will depend on how many blow in, when they arrive and how many are infected with the phytoplasma that causes aster yellows.

Grasshoppers were a minor concern in 2012. Some field edges were treated where there were higher levels. The 2013 forecast shows few areas where grasshoppers may be problematic.

Aphids were a significant pest in several crops in July and August in Saskatchewan, including pea, alfalfa, canola, lentil, canaryseed, barley and wheat, says Scott Hartley, provincial insect specialist with the Saskatchewan Ministry of Agriculture. Aphids in small grain cereals were first noticed in mid-June in Manitoba. Populations increased in many Manitoba fields until about mid-July, after which populations very rapidly decreased. The humid conditions within the crop were favourable to aphid buildup.

Very high levels of predators (and some parasitized aphids) could be found in many of these fields in Manitoba and Saskatchewan, and helped to keep populations under control. Lady beetle adults and larvae, lacewing larvae, syphid or hover fly larvae, and parasitic wasps all were noted in crops where aphids were present, says Hartley.

However, many canola fields were seeded quite early, and situations arose where seed treatments were no longer
effective while plants were still seedlings. Flea beetle damage and foliar insecticide applications were reported from all Manitoba agricultural regions.

Hartley says cool spring conditions slowed canola growth, and seed treatments may have lost some of their efficacy, resulting in some feeding damage on canola across the province. In some situations, foliar insecticide application was required.

“We had some comments from producers asking why they have to get canola seed treated with a fungicide/insecticide, and then spray again for flea beetles,” notes Scott Meers, insect specialist with Alberta Agriculture and Rural Development. “Their concern is they are forced to pay for a whole field treatment, but could possibly get by with border sprays and scouting.”

Cabbage seedpod weevil was above threshold throughout the traditional range in southern Alberta. It is now a perennial problem south of Highway 1, and scouting and spraying are now commonplace. The weevil is also an annual pest in canola and some mustard varieties in southwest and south central Saskatchewan.

Hartley says the annual survey conducted in late June and early July showed the distribution of the cabbage seedpod weevil has been extending its range eastward to near Moose Jaw in 2011, with potentially economic populations near Riverhurst (Rural Municipality [RM] 224) and Marquis [RM] 191).

Levels of lygus bugs became economical in many canola fields across Manitoba in mid- and late July. Most reports of high populations or insecticide applications for lygus bugs in canola were from the eastern, central and northwest regions.

There were some accounts of lygus bug populations in the range of 30 to 60 per 10 sweeps.

In southwestern Alberta, moderate to high densities were found at early flowering, with much spraying in the areas. In central Alberta, infestations were common, but little spraying took place since they appeared later in the season.

Bertha armyworm numbers are on the increase across the Prairies. Numbers were high in central Alberta with serious infestations causing some severe damage to crops before spraying could occur. Sprayed acres in Alberta were in excess of 200,000 acres, mostly in the north and east central areas. Meers says one more outbreak year is likely in Alberta.

Spraying occurred throughout Saskatchewan, except for the southwest. “Bertha armyworm outbreaks historically tend to last for two or three years, so this is a pest to be on the lookout for in 2013,” says Hartley.

Growers are reminded to check provincial insect forecasts in-season, as pheromone traps are put out throughout the Prairies to help predict risk levels based on adult moth emergence.

Pheromone-baited traps for diamondback moth adults collected moths much earlier than in the past, with some captured in late March and early April across the Prairies, although moth counts were not as high in Saskatchewan. However, by the time canola was coming into bloom when the larvae could cause economic loss, the populations seemed to have collapsed. Parasitoids, lacewings, ground beetles, weather conditions and fungal infections may have contributed to the decline in diamondback moth populations.

There were reports of spraying for zebra caterpillar in canola fields near Portage la Prairie and Dauphin, Manitoba, says Gavloski, who notes this is the second year in a row there has been spraying for the pest in that province. Damage was also reported in Saskatchewan canola fields, primarily in the southeast and south central regions. Hartley explains the caterpillar primarily feeds on the vegetative parts of the plant, but was also reported to be feeding on canola pods.

In Alberta, zebra caterpillar was a threat as well.  However, Meers does not expect it to be a big issue in 2013.
No insecticide is registered for zebra caterpillar in canola but some control may have coincided with insecticide application for other insect pests, such as bertha armyworm, says Hartley.

Although the swede midge has been in Saskatchewan for several years, Hartley reports that 2012 was the first year of economic damage in canola. The Canadian Food Inspection Agency (CFIA) reported captures of adult swede midge in pheromone traps in the northeast (Nipawin and Melfort) and east central (Yorkton) areas of Saskatchewan in 2007. The most significant damage was to a few canola fields in the northeast near Tisdale.

“Since this insect has been present in the area for several years with no previous record of significant damage, it is difficult to predict what will happen in 2013,” says Hartley.

Cereals
Wheat midge was present in increased numbers in Alberta and Saskatchewan. Virtually every county in Alberta reported wheat midge, and growers should pay attention to scouting for wheat midge in 2013. Hartley says 2012 was a favourable year for wheat midge development, and it was at economic levels in the south central region of Saskatchewan in an area that was not considered at high risk. The threat of wheat midge is expected to increase in 2013.

Gavloski says true armyworm (Mythimna unipuncta) was an economic concern in many small grain fields, and the biggest defoliating insect concern in small grains. High populations of larvae were present in many fields in July. High populations were reported from many fields in the eastern, Interlake and northwest regions of Manitoba, and northeastern side of Saskatchewan.

Wheat stem sawfly numbers continue to decline in Alberta. Damage was low in much of southern Alberta, and the expanded survey found very few remaining pockets of sawfly.

Cereal leaf beetle is now well established in southern Alberta, but below economic thresholds, says Meers. The parasitic wasp Tetrastichus julis continues to keep the beetle’s population low, highlighting the importance of spraying only at economic threshold levels. A new population was reported south of Edmonton, and the T. julis biocontrol program may need to be implemented there as well. It has been identified in all Prairie provinces in localized areas.

Field peas
Pea leaf weevil was found in the same general areas south of Highway 1 in southern Alberta and southwest Saskatchewan. In 2012, the range extended north to a region south of the Red Deer area. Meers says growers in the traditional high-pressure areas should consider seed treatments in 2013 as the best protection for pea crops. Pea leaf weevil can also feed on fababeans.

Some pea fields in southwest Manitoba had insecticides applied to control pea aphids.

Soybeans
Soybean aphids were noted in very low levels in Manitoba soybean fields in late July. Populations remained very low and there were no reports of high or economical populations, says Gavloski.

Spider mite populations were controlled in some Manitoba soybean fields in the eastern and central regions from late July until mid-August. In some instances, only edges of fields were treated, but there were situations where whole fields were treated to control spider mites. Dry conditions may have been a factor in the population of spider mites reaching high levels in some fields.

Stored grain pests
Rusty grain beetle continues to be the most common insect found in stored grain, says Brent Elliott, infestation control and sanitation officer with the Canadian Grain Commission (CGC). Discoveries have been greatest in stored wheat and barley.

A large proportion of cereals harvested in the Prairies in 2012 were put into storage warm to hot. Elliott says producers should prepare bins properly before storing grain, and use aeration techniques (aeration or grain turning) to lower and standardize the grain temperature. Lowering grain temperature below 15 C as soon as possible reduces the risk of insects feeding and reproducing.

Insect monitoring websites
Surveys and insect monitoring sites can be found on the three provincial agriculture department websites. Alberta has set up an Alberta Insect Pest Monitoring network with its own homepage: www.agriculture.alberta.ca/bugs-pest
Saskatchewan Ministry of Agriculture and Manitoba Agriculture, Food and Rural Initiatives post their maps in their crop protection/insect sections. 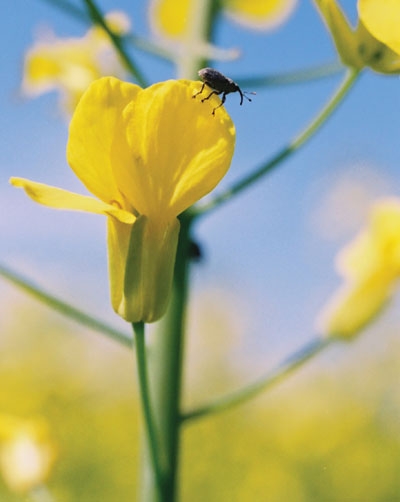 Cabbage seedpod weevil is now a perennial problem south of Highway 1. Surveys and insect monitoring sites can be found on Alberta