In 2013, a bright red 490-horsepower Class IX combine, the Versatile RT490, will be out of the shop and in the field, ready to compete head on with the biggest names in North American agriculture.

The RT490 was introduced at the Canada Farm Progress Show in Regina in June, and in on-farm demonstrations for the 2012 harvest. It is a Class 9 combine, based on guidelines supplied by the Association of Equipment Manufacturers that include grain tank size and engine capacity.

It will be competing against other Class 9 or larger combines manufactured by Case, New Holland, John Deere and Claas.

A mixture of world-leading technology is brought together in the Versatile RT490, according to Adam Reid, Versatile director of marketing, in Winnipeg, Manitoba.

Russian investment
The RT490 is manufactured in southern Russia’s port city, Rostov-on-Don, by Rostselmash, with assembly completed in Winnipeg. Rostselmash, a global combine manufacturer, builds roughly 17 percent of the world’s combines and holds about 60 percent of the market share in Russia. Rostselmash builds a wide range of combines. Several years ago, the company started developing the rotating concave rotary combine (RCR) as a product for the global market. Rostselmash purchased 80 percent ownership in Manitoba’s Buhler Industries, including access to the Versatile brand, in 2007.

Testing on the RT490 combine in North America has been underway since 2010.

“We’ve tested them in pretty much every crop grown in North America to determine how they compare in terms of power and capacity,” notes Reid. “We brought three to western Canada in 2010 to get them into wheat, barley and canola. We brought over five additional combines in 2011 and we sent those all over Canada and the US. We did rice, soybeans, corn, milo, wheat, oats and barley. The combine performed very well in all the crops we tested it in.”

Reid says the combine is rugged, reliable, and simple to maintain and service.

“The capacity and the performance of this machine will go toe-to-toe with any other Class 9 that’s out there now,” says Reid. “Versatile has been known since 1966 for being simple, reliable, easy to service and maintain. This combine lines up with those values. In terms of daily service checks and the maintenance required, they are very low maintenance and easy to work on.”

New technology
The RT490 rotating concave rotor (RCR360) threshing system, according to Versatile, is different from – and better than – ones in AGCO, Deere, CNH and Claas combines.

Most rotary combines have a rotor turning in a stationary setting. The rotor has a partial cage around it and one or two pinch points for threshing.  For the RCR360, the rotor is enclosed completely by a 360-degree concave. It has three pinch points.

“That concave is turning against the rotor very slowly, at about 8 rpm. The rotor can turn full speed within the concave.

There are three points of threshing as the crop is going through the rotor, so grain is threshed three times in each rotation,” says Reid. “You get better threshing, better capacity and better cleaning. Because the concave turns against the rotation of the rotor, you get fantastic cleanout.”

The new technology considerably increases processing stability and productivity, by allowing a uniform layer of material to enter the rotor.

North American version
Engineers at Rostov-on-Don spent a year developing a version of the combine for North America, and for the Versatile brand. They equipped it with a familiar built-in-Indiana Cummins QSX 11.9L engine. Cummins engines are standard power units for Versatile tractors.

The QSX meets interim Tier 4 emissions standards with Variable Geometry Turbochargers that also help improve fuel economy. It is tuned up to 490 horsepower for adequate power in tough crop conditions.

The RT490 brings some familiar technology to the table for Canadian and American farmers to consider, too. MacDon Industries in Winnipeg, is supplying conventional headers and draper headers for the Versatile RT490. Versatile is offering headers at up to 35 feet wide and up to 12 rows for the combine. Corn headers will be available from suppliers such as Capello and Geringhof. Raven Industries is supplying a yield monitor, moisture sensor and autosteer.

The drive line has a lot in common with the Claas combines from Europe, notes Reid. MudHog is supplying an optional all-wheel-drive system. Future options may include tracks or dual wheels.

Two modes are available from the straw chopper. It has a two-speed shred and scatter mode for spreading debris evenly across the swathed area. Or, it can drop crop debris straight behind the combine for later pickup. One button and a pin will raise and lower the chopper.

The 340-bushel grain tank features standard hopper extensions that are controlled from the cab. Unloading capacity on the 19-foot auger is about three bushels per second

The cab isn’t big on ‘bells and whistles,’ adds Reid, but he calls it “adequate and not a hard place to spend a day” at work.

Winnipeg workers also put North American tires on the red combines and make a series of other minor changes. In addition, they perform full inspections before sending the new combines to dealers. 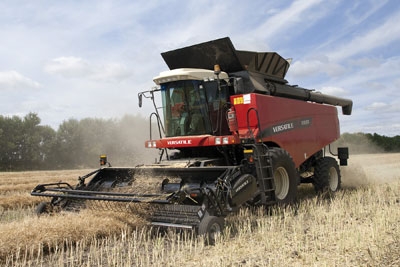