Camelina is a new oilseed crop to Western Canada that may have a promising future. Camelina sativa, also known as false flax or German sesame, has been grown in Europe for centuries. Researchers at Agriculture and Agri-Food Canada’s (AAFC) Saskatoon Research Centre began working on a camelina breeding program in 2005. In 2011, the program expanded to a joint program with AAFC and Linnaeus Plant Sciences Inc., continuing on with the earlier breeding efforts.

“The goal of our program is to develop agronomically superior cultivars that are adapted to the Canadian Prairies,” explains Dr. Christina Eynck, plant breeder with Linnaeus Plant Sciences and visiting scientist with AAFC. “For Linnaeus, the goal is to develop camelina as an industrial oilseed crop for applications for biodegradable lubricants, motor oils, hydraulic fluids and polymers.”

Next to the breeding objectives of improving camelina yield and oil content, researchers are also working on the seed size. “Camelina seeds are very small, about the size of alfalfa seed and only one-third the size of canola seed, so seeding can be challenging, especially under dry conditions,” says Eynck. “Combining and seed cleaning can also be challenging with small seeds. We are working on increasing the seed size, but at the same time we don’t want to lose the oil content of the seed.”

Camelina currently has an oil content of about 40 to 42 percent, which is quite high and interesting because camelina has not seen a lot of intensive breeding so far. Some other interesting agronomic features of camelina are that it is very early maturing, frost and drought tolerant. Camelina matures within 85 to 100 days; so on average it is about 10 days earlier than canola. It is frost tolerant in the seedling stage, and can be seeded very early. Camelina also requires lower N fertilizer amounts than canola, for example.

“Another factor that makes camelina so attractive is that it is resistant to flea beetles and diamondback moths,” explains Eynck. “Camelina is also resistant to the diseases blackleg and alternaria, which are important issues for production.” Two diseases that camelina is susceptible to, and that are part of the breeding program objectives, are downy mildew and aster yellows. Both diseases can be a problem in production.

“We are also working on herbicide tolerance, because currently there are no broadleaf herbicides available in camelina as it has not shown tolerance to any that have been tested,” explains Eynck. “We are close to creating a herbicide-tolerant line of camelina through the use of mutagenesis, which is a conventional plant breeding technique and not a GMO. We have already identified lines that show good tolerance to the herbicides, and expect to have herbicide tolerant cultivars ready for commercialization in two or three years.” This is a collaborative effort with Dr. Linda Hall at the University of Alberta and Eric Johnson at the AAFC Research Farm in Scott, Saskatchewan.

In the original AAFC program, one cultivar was developed with high yield and oil content, and with downy mildew resistance. “This is the first cultivar to my knowledge that has downy mildew resistance,” says Eynck. “This cultivar was licensed to Linnaeus in the spring of 2012 and is available for production. Linnaeus will be offering camelina varieties under contact to growers, once the program expands and markets are established.”

Camelina will be an oilseed crop option for growers in most crop growing areas, although the main target areas are the Brown soil zone in southern Alberta and Saskatchewan and the Peace Region of British Columbia and Alberta. Results from field trials in the Peace Region have been very good so far.

“Next to our conventional breeding program for camelina, Linnaeus Plant Sciences is also working on creating GMO lines with improved fatty acid profiles for industrial applications,” says Eynck. “The current high linolenic acid content is not ideal for some industrial applications, so our team has created a line with an oleic acid content of up to 60 percent. The research and testing to meet all regulatory requirements for these lines are part of Linnaeus’s program.” 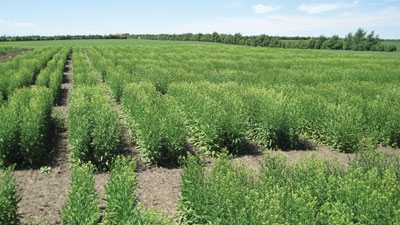 Camelina nursery trials are working on improving agronomic performance of camelina. Camelina is a new oilseed crop to Western Canada that may have a promising future.