The importance of aeration during a harvest when climatic conditions are hot and dry is not always considered, and this can result in overheating due to moisture migration. In this article, we will examine a common problem experienced during a hot and dry harvest when aeration is not utilized properly: insect, mite and mould infestation.

Both situations (overheating and infestations) can be avoided by the use of small amounts of air, typically 0.1 to 0.2 cfm/bu, moved through the grain mass to lower and control the internal bin temperature.

Failing to protect grain from insect infestations may result in a loss of quality, a price that may be too high to pay considering the relatively low cost of prevention.

In the past, producers have relied on a wide assortment of chemical treatments including protectant dusts, insecticides, fumigation processes and control insect problems. However, with the use of modern aeration equipment we can control pests in a much more gentle and preventive program. Simply put, by controlling the temperature of the grain mass through the use of air we can inhibit the development of pest problems.

This is because at 15 C the ability of insects to lay their eggs and develop begins to be reduced. If aeration fans are turned on immediately after the grain is harvested it is possible to have the internal temperature below 15 C in slightly less than two weeks. It is very important to note that grain that is not aerated can remain warm for months, allowing insects to survive the winter. The convection currents created by this warm air may promote condensation, sprouting (heating), and mould growth in grain that is not cooled immediately. These conditions are attractive to the development and growth of pests and will help sustain their existence.

The above-mentioned practices are aimed primarily at controlling the laying of eggs and the development of pests. More severe and cold temperatures need to be attained in the bin for total elimination (killing of the pest).

For further information, go to www.grainguardian.com. 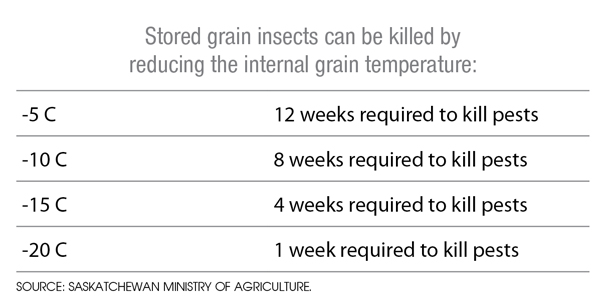 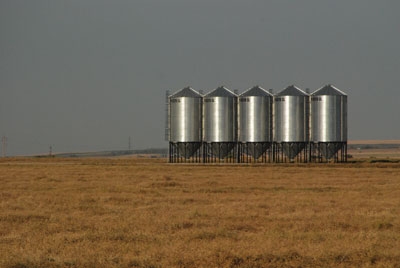 The improper cooling of grain may allow insect Overheating in bins can quickly lead to insect infestations.