Growers outside traditional canola growing areas in Saskatchewan and Alberta are looking to two alternative industrial oilseed crop options. Camelina sativa (false flax) and Brassica carinata (Ethiopian mustard) are proving to have a fit in some areas of the Prairies. Camelina has potential for various products in the industrial oil market and the food market, whereas carinata is currently being developed primarily as a drop-in aviation fuel product.

“Camelina is adapted to just about anywhere on the Prairies, including shorter growing season areas like the Peace region,” says Eric Johnson, weed biologist with Agriculture and Agri-Food Canada (AAFC) at the Scott Research Farm in Saskatchewan. “Camelina can mature in 95 days, similar to Polish canola, and seems to have some drought and frost tolerance. Carinata, which also shows drought and heat tolerance, requires a bit longer growing season and is targeted more to the Brown soil zone, including similar areas in the northern US. In 2012, about 10,000 acres of carinata were grown in Saskatchewan and Alberta, and the acreage is expected to expand considerably.”

These crops were originally promoted as low-input crops that shouldn’t require much fertilizer. Researchers at AAFC wanted to find out if that was the case and initiated a three-year study to determine the optimum nitrogen (N) requirements for camelina and carinata. They also looked at the optimal plant density and seeding rate for both crops.

The N response studies were conducted over a few different environments and at different rates of N from 2008 to 2010.

Trials were conducted in Saskatchewan at Scott, Melfort and Indian Head (camelina only) and Lethbridge, Alberta. The trials were direct seeded into stubble using fertilizer rates ranging from 0 to 224 kg/ha (0 to 200 lb/ac).

Research results showed that both crops definitely benefited from N applications, which are necessary to optimize yields. “We found that camelina had a yield response up to fertilizer rates of 95 to 115 kg/ha (85 to 102 lb/ac), with yields averaging 1900 to 2100 kg/ha (35 to 37 bus/acre),” says Johnson. “This is similar to previous work done on Polish canola.

Carinata showed a yield response to higher rates of fertilizer of 108 to 135 kg/ha (96 to 120 lb/ac), with yields averaging 1700 to 2200 kg/ha (30 to 39 bu/ac). From our results, we recommend growers follow similar fertilizer recommendations for B. rapa, or Polish canola, for camelina and B. napus, or Argentine canola, for carinata for N requirements and other nutrients including phosphorus (P), potassium (K) and sulphur (S).”

“For seed oil concentration, both crops respond to higher N applications similar to canola,” notes Johnson. “As N application rate increases, the seed oil concentration goes down and the protein goes up. However, the higher yields from N applications result in higher overall oil yields per acre. The optimum fertilizer rate for yield is close to optimum seed oil yields as well, which is typical with most oilseed crops. Therefore, growers should follow similar fertilizer recommendations for Polish canola for camelina, and Argentine canola for carinata, to optimize seed and oil yields.”

Johnson adds that both crops appear to have some drought and heat tolerance, but research needs to confirm that. 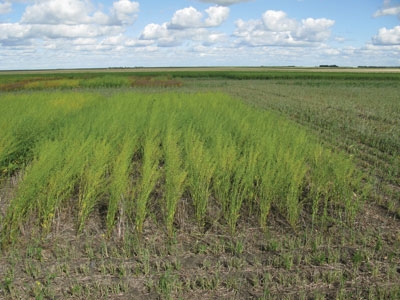 Camelina fertilizer trials at Indian Head Camelina and carinata are proving to have a fit in some areas of the Prairie provinces.
Print this page